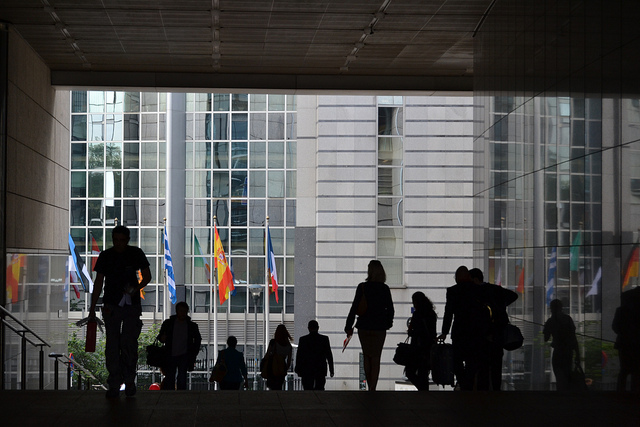 In 2014, the Parliament had a budget of €1.75 billion, of which roughly 27% or €474 million is spent on MEPs. That includes salaries, costs for travel, offices and the pay of personal assistants.

The Parliament spends €3.2 million each month solely on MEPs’ general expenditure allowance (almost €40 million) and no one is monitoring this spending, noted Anuška Deli?, one of the 29 journalists who asked the Parliament to disclose the information.

The 29 journalists, coming from every EU member state, teamed up to request four years of copies of spending records. They specifically asked for documents regarding the money MEPs receive on top of their salaries, including a general allowance, travel allowance, daily subsistence and funds for staffing. But the Parliament refused to open these expenditures to public scrutiny because of privacy concerns.

The journalists’ lawyer, Slovenia’s former Information Commissioner Nataša Pirc Musar, is convinced that “personal data protection rules were not properly interpreted and that the denial of access to requested documents was unjustified”.

“We do not demand access to records about how MEPs spend their salaries, which are intended for their personal and private use, but information (on) how they spend all extra payments they receive on top of their salaries, and only those extras which are paid to them solely for the exercise of their professional public mandates as elected representatives of European citizens,” added Deli?.

MEPs have also monthly allowance of €21,349 to pay their assistants. The Parliament is already trying to clamp down on lawmakers employing excessive numbers of assistants.

“The European public is entitled to know how almost half a billion euros of its taxes is being spent. Meanwhile the MEPs, who are the only elected representatives of European citizens, have repeatedly voted down efforts to regulate this issue,” the group of journalists said in a statement.

The European Parliament told EURACTIV it hadn’t received any complain yet and explained the House takes decisions on requests for access to documents taking full account of the rules on both transparency and data protection.

“We have not been notified for now. But, as this is seemingly going to be a court matter, the Parliament will abstain from giving any further comments,” Parliament’s spokesman Jaume Duch Guillot told EURACTIV.

According to the journalists though, the Parliament justified their refusal to grant the information because it does not hold any relevant documents showing how MEPs spent their allowances.

The simple fact that the Parliament does not properly monitor MEPs’ spending legitimises the public’s right to know and monitor public spending by this institution, the journalists said.

“We asked the Parliament for copies of pertinent bank documents, but they said they do not hold any such documents,” said Deli?.

Earlier this year, a UKIP MEP was suspended and barred from standing in the UK elections after she was accused of European Parliament expenses fraud.

In 2009, revelations of the misuse of expense reimbursement schemes by the UK parliament demonstrated that massive abuse of such programs can indeed occur. “The only known remedy is transparency,” said Deli?.

“By simply denying access to requested documents the European Parliament is effectively granting MEPs the right to secretive public spending and giving them full immunity from public monitoring of their dealings. We argue that the reasons given to the reporters for denying their requests have no basis in any European regulation,” concluded Pirc Musar.

One of the media who are suing Parliament is Bivol, the Bulgarian investigative website who found that MEP Iliana Iotova had used EU funds to pay a public relations company in her country for an alleged badmouthing campaign against Bulgarian Commissioner Kristalina Georgieva, using internet “trolls”.

Iotova has admitted having sent a bill for €4000 to the European Parliament to pay the company, but she insisted that the money was for a study, and not for badmouthing campaigns.

At that time, EURACTIV asked the European Parliament if the payment was made, or if by any chance it would be refused due to doubts about the real purpose of the money. The Parliament responded that it cannot give out information on individual MEPs’ financial affairs.