Did the Commission censor Big Tobacco documents because of TTIP? 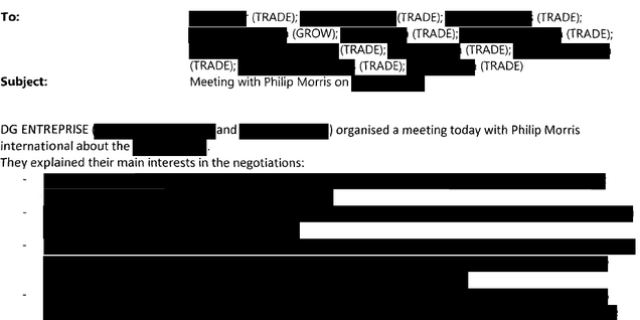 The European Commission has denied that heavily redacted documents about meetings with Big Tobacco companies have anything to do with EU-US trade talks for the Transatlantic Trade and Investment Partnership (TTIP).

But campaigners and MEPs argued that contradicted Commission Secretary-General Catherine Day’s written justification for blacking out huge swathes of the papers, which were released under EU freedom of information law.

European Ombudsman Emily O’Reilly, who investigates maladministration in the EU institutions, warned the “starkness of the redactions” and absence of clear reasoning for them, risked causing concern about the nature of the Commission’s meetings with the tobacco industry.

Catherine Day only granted “partial access” to the documents – which led to CEO being sent the heavily censored documents.

Among them was a 14 page letter from British American Tobacco, which was almost entirely blacked out and a separate one page summary of a Philip Morris meeting that even removed the date.

Day said that three of the papers were redacted because they “contain elements that relate to the Commission’s negotiating position with regards to tobacco in the ongoing bilateral negotiations for a free trade agreement with the USA and Japan”.

But Commission Deputy Chief Spokesperson Alexander Winterstein yesterday (27 August) told EURACTIV the documents in question “had nothing to do with TTIP”.

Instead, it was a simple question of guarding commercially sensitive information and observing EU law, he said.

That position was repeated by the EU’s TTIP communication team on Twitter. Day’s letter does also mention commercially sensitive material as a reason for the redactions.

On Wednesday (27 August) Irish MEP Nessa Childers (S&D), put a parliamentary question to the Commission, demanding confirmation that the documents had “absolutely nothing to do with TTIP”.

Childers told EURACTIV, “The only logical reading of the Commission’s Secretary General’s words is that not only these documents are extremely relevant to the TTIP negotiations, but also that the tobacco industry has privileged access to information about the ongoing talks.

“Ideally, Ms Day herself should dispel this glaring contradiction between her words and the Commission official’s declarations,” the lawmaker added.

@EU_TTIP_team @campact “nothing at all to do with #TTIP“?? we’ll take the Secretary General’s word on this, thanks.

Olivier Hoedeman, of CEO, filed the request for information. He said transparency was needed to know if EU trade negotiators, after meeting tobacco lobbyists, were attempting to influence tobacco control regulations in other countries.

It was important to find out whether they were pushing for the inclusion of the controversial investor-to-state dispute settlement (ISDS) in new trade agreements, he said. ISDS can allow companies to sue national governments in international courts.

Hoedeman said, “They have gone far further in censoring the document than what is normal practice, removing virtually all the content instead of the parts that can be justified specifically under EU freedom of information law.

“They have even removed references to which negotiations are discussed, dates and page numbers. We have no doubt that the European Ombudsman will take a very critical view of the Commission’s handling of this freedom of information request,” he said.

CEO intends to file a complaint with the Ombudsman. If the complaint is deemed justified, the Ombudsman will try and negotiate a “friendly solution” between the NGO and the EU executive. This can include compensation.

While she cannot force the institution to comply with her recommendations, they do exert significant influence. If that fails, the watchdog can close an investigation with a damning report.

Ombudsman O’Reilly told EURACTIV she couldn’t comment on the legality of the redactions at this stage. She will be able to demand to see the uncensored papers as part of an investigation.

She said, “I would call on every EU institution to be aware of the damage to trust and credibility that can occur when sight is lost of the wider, political, social, and economic context in which communications are received, at face value, by ordinary citizens.”

The decision to redact, which the Commission confirmed was Day’s, was widely criticised on social media after CEO publicised the documents. Britain’s Independent newspaper also put the controversy on its front page yesterday.

Thursday’s Independent: Smoke and mirrors: do Brussels and Big Tobacco have something to hide? #tomorrowspaperstoday pic.twitter.com/Q3lnIIxJqx

But the Commission denied that it had scored a public relations own goal.

“We are not only not embarrassed, but we are absolutely certain we are doing the right thing,” said Winterstein, who stressed the redactions were in line with EU law.

Asked if the decision had been a public relations disaster, he added, “Absolutely not. It would be a massive PR disaster if we had given out information that was commercially sensitive.”

Such commercially sensitive information could give competitiors an unfair business advantage, he said.

The Commission has repeatedly said that the TTIP talks are the most transparent trade negotiations in history. It runs a dedicated TTIP website and Twitter account, and holds media briefings on the negotiations. It also provides more information about the negotiating process with the European Parliament than required under the Lisbon Treaty.

Despite that, concerns remain over the perceived secrecy of the talks.

In July 2014, the Ombudsman launched a probe into the alleged lack of transparency around the EU-US trade negotiations. But she also recognised that the EU institutions have made a “considerable effort” to promote transparency and public participation concerning TTIP.

In January 2015, Trade Commissioner Cecilia Malmström published TTIP negotiating documents in a bid to head off some of the criticism.

But documents regarding market access, which could include the tobacco papers, quotas and tariffs were too sensitive to be published, she said at the time.

A separate Ombudsman investigation into the previous Barroso Commission’s relations with the tobacco industry is expected to be resolved in the coming weeks. In 2012, then-Commission President José Manuel Barroso sacked Public Health Commissioner John Dalli, after the ‘Dalligate’ tobacco lobbying scandal.

But anti-TTIP campaigners claim the deal will lead to a lowering of environmental, food safety and other standards. They have also criticised a lack of transparency in the talks and raised concerns over the influence of big business lobbyists over the talks.