In countries like the United Kingdom, new phenomena like “Drunkorexia” have emerged according to which young people prefer to eat less in order to “save” calories for alcohol consumption.

A report published in August found that 43% of British men and 35% of women between the ages of 18-24 ditch meals in favour of binge drinking.

The Lifestyle in Mobility project, a two-year research study funded by the European Foundation for Alcohol Research (ERAB), showed that during their study abroad experience, many students put themselves at risk from excessive alcohol consumption.

Being away from their home country, Erasmus students socialise more frequently. And during their famous parties, some of them consume large quantities of low-cost and low-quality alcohol, in part because of their limited financial resources.

In an effort to stop this trend, the Erasmus student association joined forces with spirits maker Pernod Ricard to raise awareness and prevent the excessive use of alcohol.

“Responsible Party” is a Pernod Ricard commitment as a member of the European Commission’s Alcohol and Health Forum, which brings together a wide variety of stakeholders in an effort to reduce alcohol-related harm.

The programme is implemented by the Erasmus Student Network (ESN), with the aim of informing students about the harmful effects of alcohol overconsumption at parties. The ESN is a network of around 550 member associations covering around 1,000 local campuses in 40 different countries.

Speaking at a EURACTIV event on Tuesday (24 January), ESN President Safi Sabuni stressed that Erasmus should not be viewed only from an academic point of view but also as a life experience programme.

“For us, it’s a great responsibility to connect with students locally, to be able to create certain bonds and build friendships with these Erasmus students as well,” she told participants at the event, which was supported by Pernod Ricard. “So being able to assist them and support them in this personal growth that an Erasmus experience is, is incredibly important to us.”

Referring to the Responsible Party campaign, she emphasised it was based on one of the cornerstones of the organisation, which is peer-to-peer education and support. Over the past seven years, the campaign has managed to reach over 300,000 students, she said.

Sabuni said the programme involved sending “ambassadors” at student parties to provide information regarding alcohol abuse, offer water or food and, if necessary, assist with getting a safe ride home.

“They do it in a fun way, so it’s not pointing the finger and saying, ‘No, you shouldn’t have a second or third beer’ but really questioning and having discussions with the students during the activities,” she said, adding it was important to make sure that Erasmus students also consume food, water, and snacks while drinking.

“We have different activities such as photo booths, messages saying “Bust the hangover” as we want them to remember it the next day. You want to keep those memories, not spoil the experience of being abroad,” Sabuni said.

Need to be drunk to celebrate?

Martine Reicherts, European Commission Director-General for Education and Culture, noted that the Erasmus programme was celebrating its 30th anniversary this year. She wondered why celebrations are so often associated with drinking.

“Do we really need to be drunk each time we celebrate?” she asked the audience.

“I’m the first one who likes a glass – or even two glasses – of whatever. But I think what is important nowadays is really how do I feel responsible? And how do I behave?” she noted, denouncing the “paternalistic” approach often taken towards alcohol consumption by young people.

For Reicherts, personal responsibility is paramount. “You are in charge of your life. You are Erasmus students. What are you ready to give as an example to all of your fellow friends? I think that’s the question,” she added, saying moderate consumption was the key.

“I think it’s not about a life whereby, you just do nothing. You know, I’m vegetarian, but not completely. Once in a while I will I will eat a filet américain,” she said.

“Good old days” at the Berlaymont

The EU official also referred to the Commission’s “good old days”, saying that during official cabinet meetings everyone used to drink wine.

“They started with an aperitif, then they had wine, a cigar, a Brandy. All that was acceptable,” she said, noting that none of this would be acceptable today any longer.

Xavier Prats Monné, director-general for Health and Food Safety at the European Commission, praised the Responsible Party campaign, saying it was very difficult to influence the behaviour of young people.

“So, having a group of students who talk to other young people from their own experience to avoid getting unconscious with drinking is a good idea,” Monné said, noting the project worked effectively since it managed to reach more than 300,000 people.

What is missing, he stressed, is the transition from a good project to having “systemic impact”. 300,000 students is a big number but not really enough compared to the scale of the problem, he remarked.

“We must get to the point where binge drinking is as socially unacceptable as drunk driving,” he said, adding “it can be done”. Indeed, drunk driving was still socially acceptable in some countries some years ago, he remarked.

“In many legal systems, especially in southern continental Europe, when you were drunk it was less serious to have an accident and maybe kill someone. We should reach the point where binge drinking won’t be a sign of pride among young people,” the Commission official insisted.

“It’s efficient in terms of raising awareness on alcohol overconsumption and it’s highly appreciated within the network,” he told the event.

The challenge now, he continued, is to scale it up and amplify it through digital media beyond the ESN so that it can reach out to more young people.

Ricard explained that responsible drinking has been a fundamental value embedded in the company’s DNA since a very long time. The focus, he stressed, is on the “long-term approach to our business”.

“The first party I attended was with my parents and friends and I saw what a responsible party is, to have fun without drinking too much,” he said, adding that consumers, parents,  the education system and the authorities all have a role to play.

Several ESN volunteers intervened at the event to describe their experience running the campaign at Erasmus parties.

In Poland, the emphasis was placed on ensuring students have access to water at parties. “In Poland, if you go to a party, water is more expensive than beer. So, what do you do? You buy a beer,” Polish activist Kasia Gerlée said, adding that nobody will even think about the positive effects of water while consuming alcohol in a party.

“The point is to change some behaviours during parties. Because if I know that I can have a bottle of water for free, I will take it. If I know that I can eat something and make myself feel better and enjoy my time in a better way, I will do it,” she said.

Martina Dlabajova, an MEP of the Group of the Alliance of Liberals and Democrats for Europe (ALDE), commented, “From my liberal perspective, I don’t believe that strict rules will be sufficient to tackle the drinking problems”.

“We need rules but we should not ban everything, on the contrary, we need to teach people the responsibility toward parties and drinking. Rules cannot work out if young people have not perceived the meaning of responsibility,” she added. 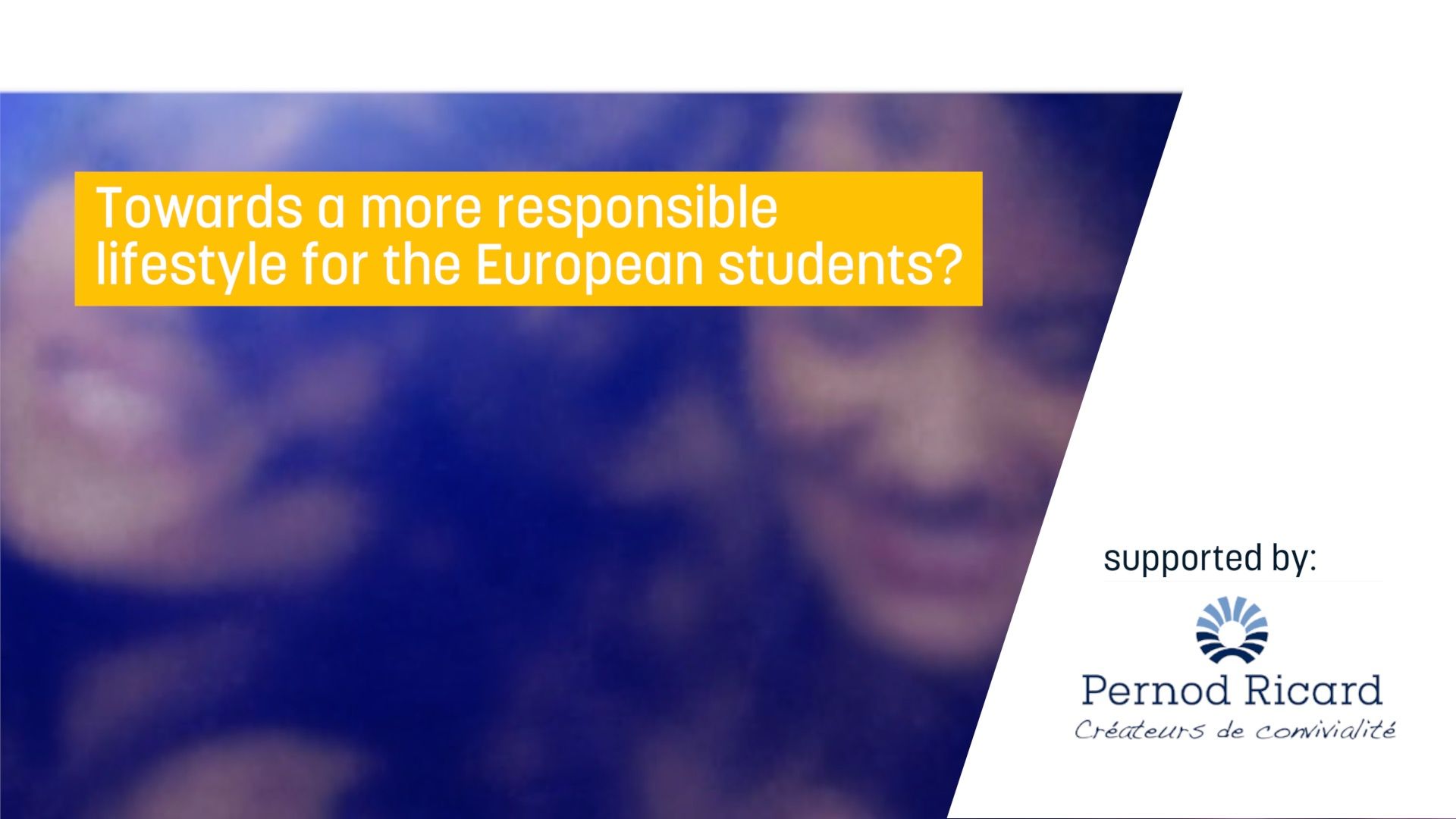 Towards a more responsible lifestyle for European students?

The Responsible Party program is a partnership between the Erasmus Student Network (ESN) and Pernod Ricard which endeavours to promote viable solutions to alcohol misuse and safe behaviour among young people.

Launched in 2006, the EU’s Alcohol Strategy is designed to help national governments and other stakeholders coordinate their actions to reduce alcohol abuse.

However, the strategy does not impose specific legislation on member states at this stage, relying instead on policy coordination and exchanges of best practices between countries.

To do this, the strategy introduced an alcohol and health forum, launched in 2007, where member organisations - public and private - are invited to debate, compare approaches and take action to tackle alcohol-related harm.

Harmful alcohol consumption also has a negative impact on labour and productivity, something the EU wants to address by promoting workplace-based initiatives.

Stakeholders such as business organisations and trade unions have a particular responsibility in this regard, the Commission believes.