EU leaders to ‘cocoon’ in new Europa building from January

There is no register of lobbying activity received by members of the Council. [European Union]

The European Council’s new lantern-shaped building, locked into a glass cube, will open its doors to the general public on Saturday (10 December) and to EU leaders and ministers in January.

Nestled in the heart of the European district in Brussels, the ‘Europa’ building will be the first step in an effort to improve the looks of the EU quarters, complete with a new pedestrian zone crossing the Schuman roundabout. 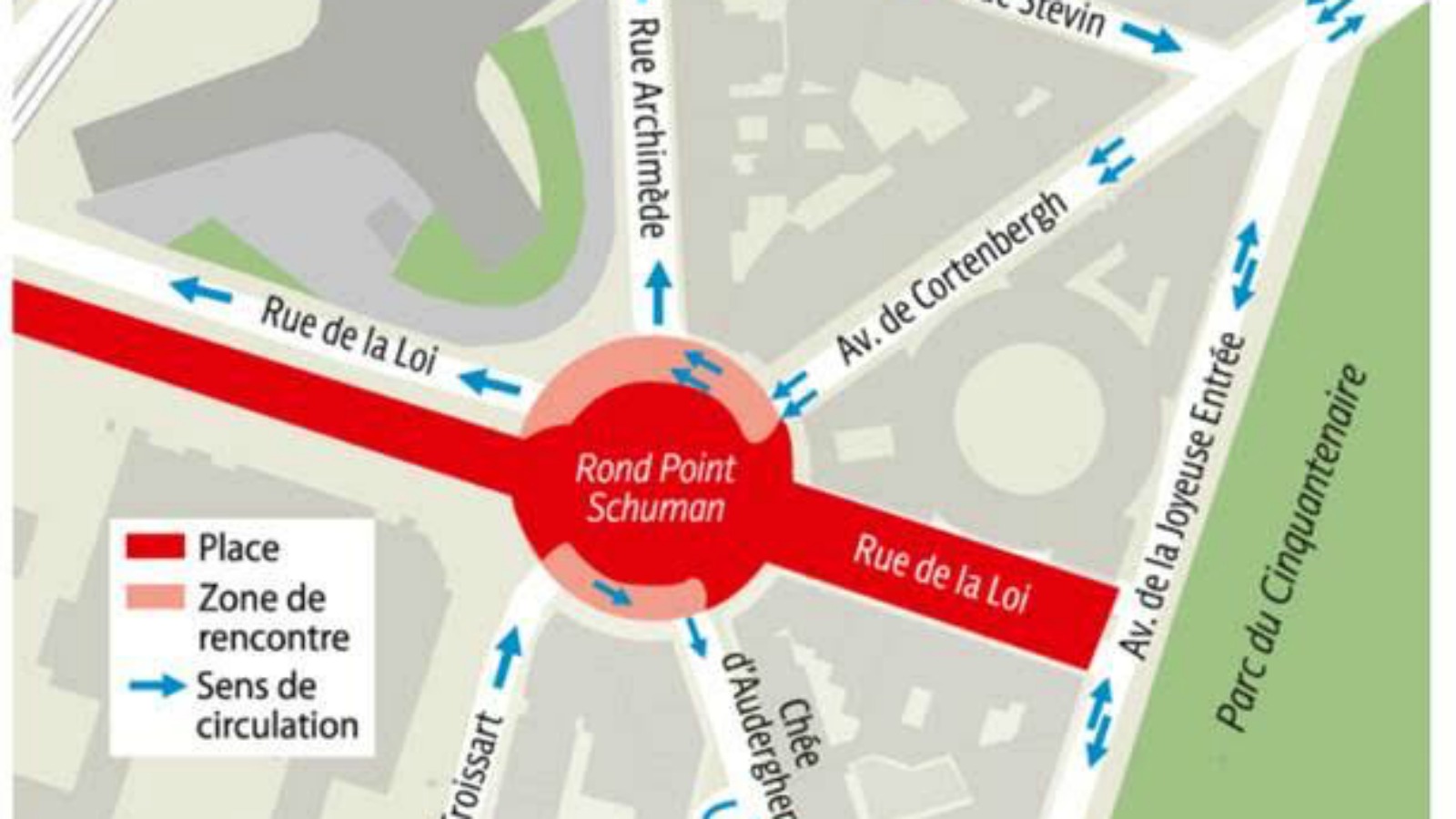 Brussels' EU quarter to get facelift, amid traffic chaos

The building, whose overall cost is an estimated €321 million, has been designed with the idea of creating a gathering space away from the noise and dust in the middle of the city’s mess, said architect and engineer Philippe Samyn.

The construction of the egg-shaped building has been kept low key, since then British Prime Minister David Cameron slammed what he thought was a typically unnecessary EU expense.

At a time of harsh austerity cuts in national budgets, and in the midst of the sovereign debt crisis, the EU’s plan for a new building was “immensely frustrating,” Cameron said, in comments that found a favourable echo among other EU heads of states and government.

British Prime Minister David Cameron attacked European Union leaders on Friday (24 June) for trumpeting a €240 million investment in a new Brussels home when it is preaching austerity to member states.

Samyn, who is the lead architect and design partner in a consortium with Italy’s Studio Valle Progettazioni, and the UK’s Buro Happold, explained that the construction of the building was very much secondary to its real meaning – to house leaders and ministers meeting to shape the EU’s future.

“We tried to create a sort of cocoon,” Stéphane Magnette, the Council’s project manager for the Europa building, told the press visiting the premises for the first time.

The room where EU leaders will meet is quite small and intimate compared to the ones they are used to in Justus Lipsius, the current building used for European Council and Council meetings. 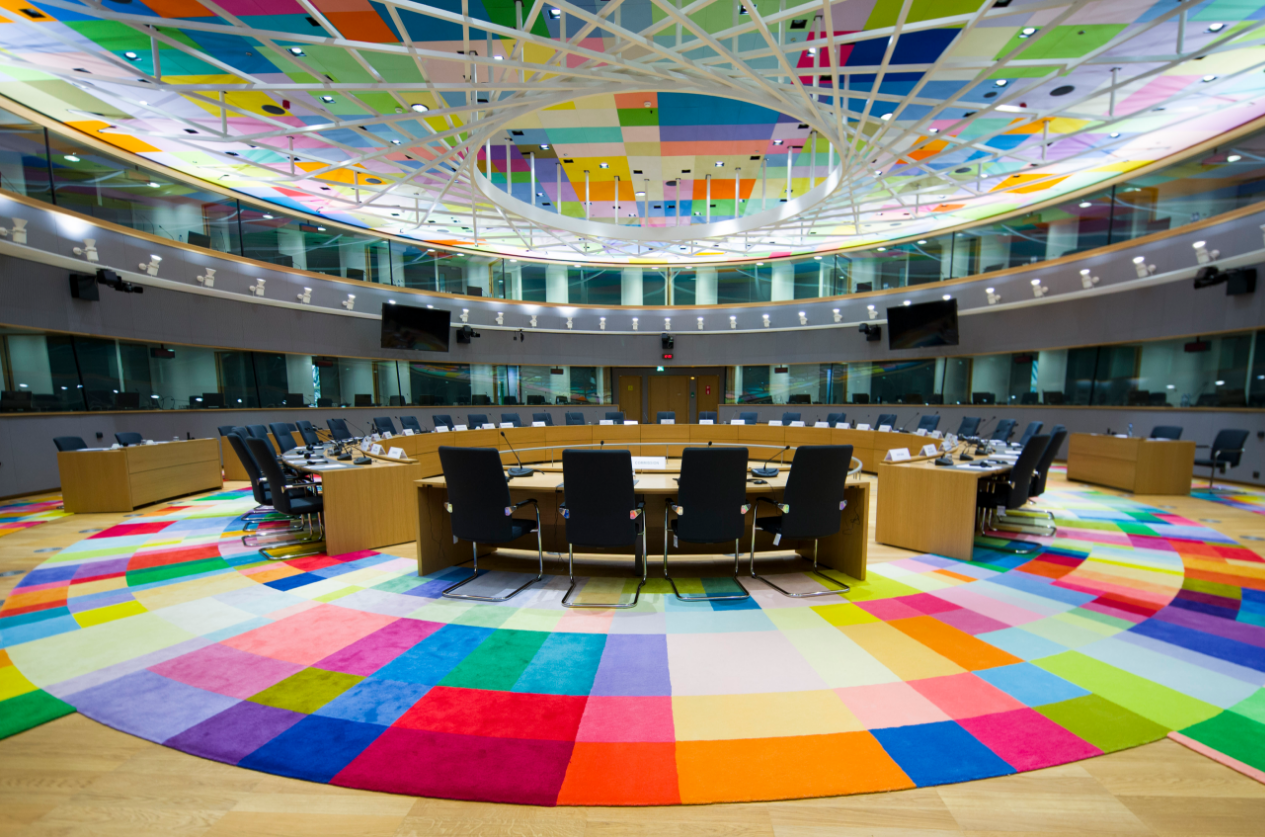 The project goes back to 2004 when EU leaders decided to end the traveling circus of holding meetings in the country of the rotating presidency of the EU.  Then, a new facility had to be found, as Justus Lipsius was ill-conceived to host meetings with heads of state and government.

That same year, the European Council accepted the Belgian government’s offer to use the Residence Palace site. Soon after, an architects consortium was selected, but it was only in September 2011 that the actual construction work started.

“The Justus Lipsius was not suited to hold meetings with so many members,” said William Shapcott, the Council’s director general for administration, referring both to the enlargement of the bloc and the increase in the number of meetings.

A total of 6,000 meetings are organised every year in different council formations. European councils have gone from four to 8-9 per year, with a record of 12 in 2015, not counting the number of smaller meetings happening in the margins.

The old building was also unsuitable to accommodate multilateral summits with African, Latin American and ASEAN countries, which brought as much as 90 delegations to Brussels.

The additional space and facilities will allow for more flexibility and efficiency in the work of the Council, EU officials insisted.

The two buildings will be connected by two footbridges and will operate together as a single area. In fact, only 250 offices will be housed in the new building, as most of the administration of the Council will remain in Justus Lipsius.

Keeping the L-shaped Residence Palace, a partly listed Art Deco complex designed by Michel Polak in 1922, was both a challenge and an opportunity, Samyn continued.

The architects used old oaks windows found in junkyards across Europe to create the external cube structure, wrapping up the Residence Palace building. The roughly 3,750 old window frames have been restored and placed in large stainless steel frames to create the new façade.

“It is a way of promoting the recycling of materials but also paying tribute to Europe’s artisanship and cultural diversity,” said Samyn.

But that was the easiest part of the construction, he explained.

Coming up with the lantern design was more cumbersome. Determined more by functional and structural constraints than aesthetics, because no construction could be done on top of the underground Schuman railway tunnel, the design of the structure took some thinking, recalled the architect.

Samyn recalled dreaming about it, and the following morning sat in front of his computer trying a number of elliptic simulations until he shaped a lantern, that, from the outside, looks more like an egg.

Prefabricated in Flanders and assembled on site, the lantern structure hosts modular spaces located at the various levels with increasing and decreasing proportions, which properly fit the types of meetings being held in the building.

The interior decoration and the multi-coloured designs cover not only the ceilings and floors of the meeting rooms but also some other parts of the building, such as the lifts, and were created by Belgian artist Georges Meurant. 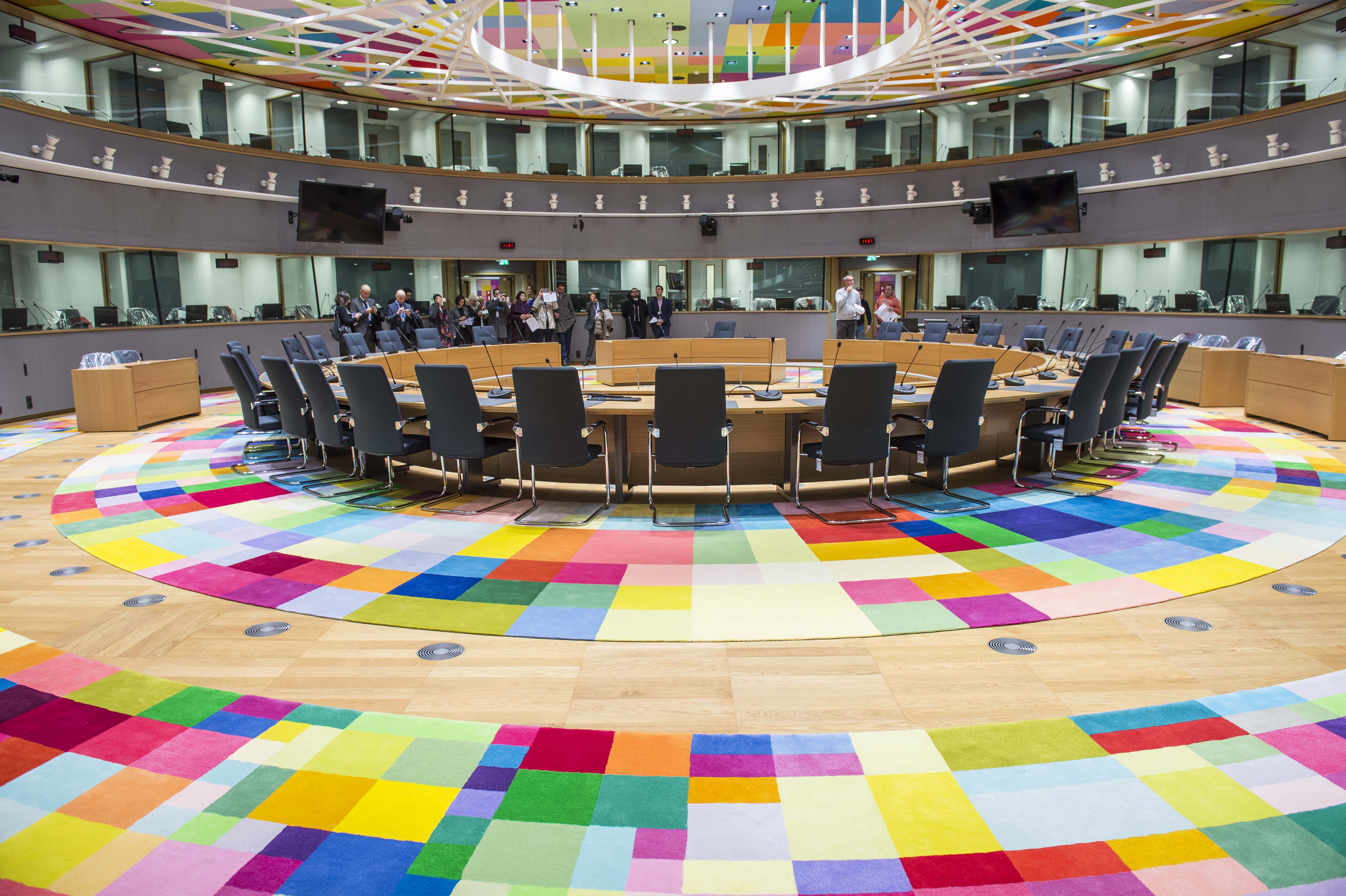 EURACTIV.com is happy to unveil the Europa building, expected to be opened during the Maltese Presidency of the Council of the EU, starting 1 January 2017. Photographs of the Brussels location for future EU summits were kindly provided by the presidency.

“I chose to bring in Georges because of his ability to combine squares, rectangles and colours in a unique composition that seeks to create a welcoming and relaxing environment,” added Samyn.

One of the requests of the Council in the architecture competition was that both the choice of materials and the design was in line with sustainable development principles preached by the EU.

Council officials are pleased with the result and are aiming to get an A grade in the EMAS certification. The building is the largest producer of solar energy in Brussels, as photovoltaic panels cover the entire top of the building, they said. The infrastructure was also given a system of rainwater collection and storage to supply the sanitary facilities.

The lighting system of the lantern infrastructure uses LEDs and most light does not come out of the lantern itself, but it is projected onto it, as lamps are placed on the inner side of the façade.

Ironically, the 27 EU leaders will move to a beautiful new venue at a time when the Union is confronted by multiple crises. As they discuss the future of the European Union, they may find inspiration in the colours and unusual shapes of the new EU summit quarters. 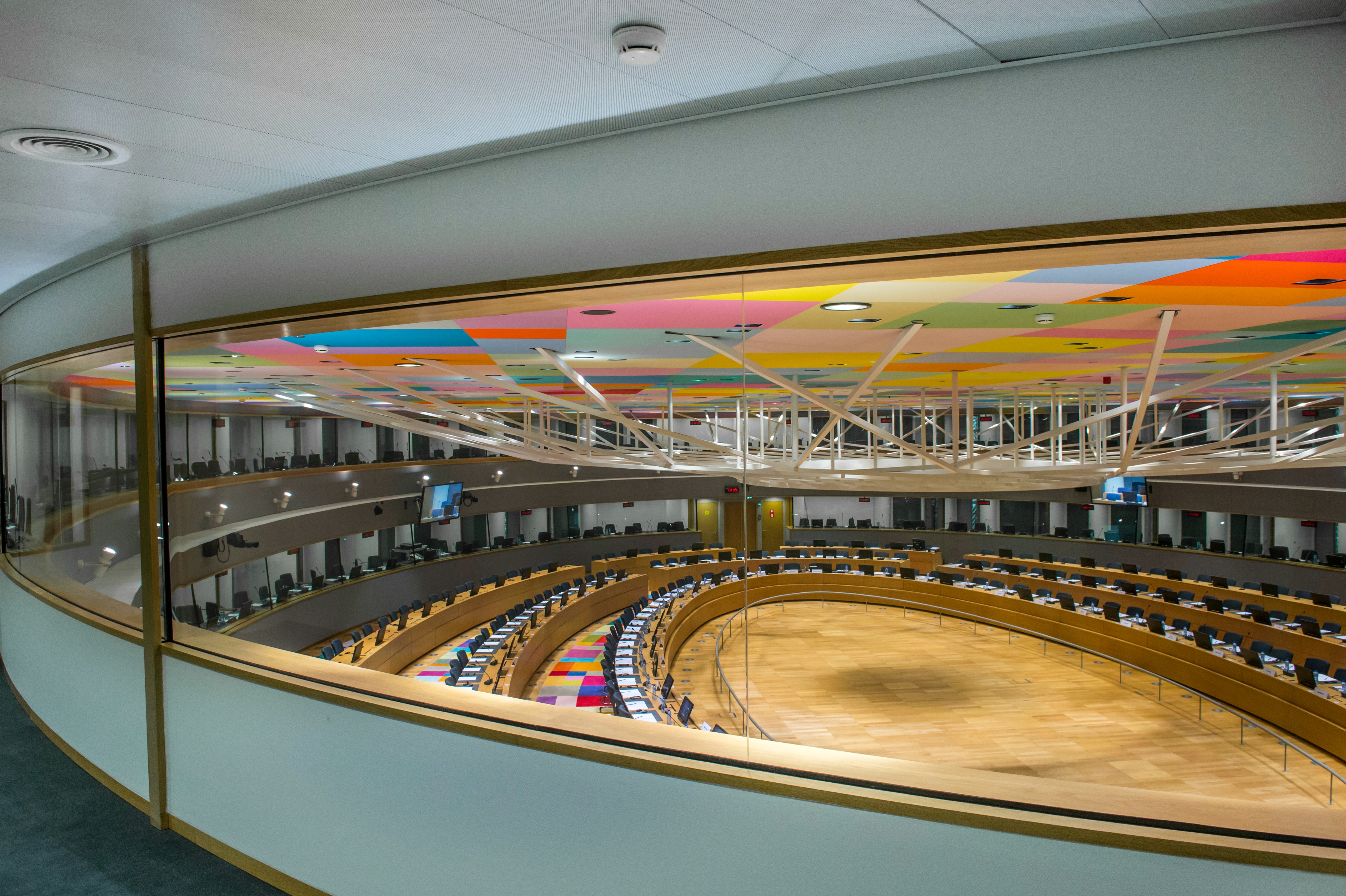