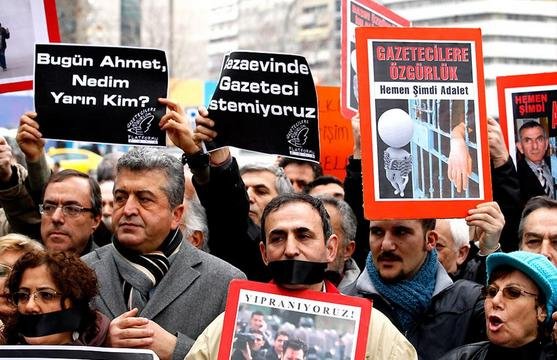 Enlargement Commissioner Štefan Füle expressed concern yesterday (3 March) over arrests of journalists in EU hopeful Turkey. Seven journalists have been arrested in an alleged plot to overthrow the government. EURACTIV Turkey contributed to this article.

''The European Commission is following with concern the recent police actions against journalists, including the detention today of Nedim ?ener, Ahmet ??k and others and the arrests last week of ODA TV site administrators Soner Yalç?n, Bar?? Terko?lu and Bar?? Pehlivan," Füle said in a statement.

The commissioner recalled that the EU executive highlighted in its report on Turkey the high number of court cases against journalists and undue pressure on the media, which undermines press freedom.

According to press reports, the journalists arrested are part of an official inquiry into an alleged plot to undermine the Islamist-rooted government and trigger a military coup, called the Ergenekon conspiracy.

Dozens of Ergenekon suspects are in prison but it often takes months for them to reach trial.

Onur Öymen, vice-president of the Republican Party (CHP), the largest opposition force in Turkey, told EURACTIV in a recent interview that people accused under the Ergenekon case have all been arrested and released several times. As the judges of this trial have recently been changed, it is believed that the tensions are a result of the change of judges.

Press freedom has come under pressure since the Justice and Development Party (AKP) came to power in 2002, although in theory it is protected by law, EURACTIV Turkey reported from Istanbul.

The AKP government applied astronomic fines on Do?an Media Group, the biggest in the country. As a result of pressures, three dissident columnists had to leave Hürriyet daily, the number one newspaper in Turkey, and the editor-in-chief had to be replaced.

The entire group could be put up for sale as the legal enquiry continues. Moreover, Turkey's second biggest media group, Sabah-ATV, was handed over to a businessman close to Prime Minister Recep Tayyip Erdo?an through credits provided by public banks. And Erdo?an's son-in-law was put on top of this conglomerate.

Other than these political tactics, pressure on press freedom continues to be exerted through parliamentary bills. As a result of the latest amendment to the country's media law, passed in January, Erdo?an was granted the authority to "shut down" TV stations "in cases of emergency".

According to the amended law, the total foreign capital of a media institution shall not exceed 50% of paid-in capital. Foreign persons – real or legal – can only be direct partners of a maximum of two media service-providing companies.

The influence over the press of the religious Fethullah Gülen Movement and other Islamic groups that support the government is gradually increasing.

If the AKP government wins the general election again in June 2011, pressures on press freedom are likely to increase, media experts warned.

Bianet, a project that seeks to establish a countrywide network in Turkey to foster media freedom and independent journalism, recently reported that the General Assembly of the Turkish Parliament has passed the Draft Bill on the Establishment of Radio and Television Enterprises and their Broadcasts, despite prior warnings related to restrictions on press freedom.

"With the approval of the draft bill, a provision to suspend programmes and issue monetary fines in cases of supposed violations of broadcasting principles was also passed into law," Bianet said.

The law stipulates that "in cases of acute necessity, for reasons of national security or due to a strong possibility that public order may be disturbed, the prime minister or a minister designated by him may suspend a broadcast".

Bianet warns that the changes introduced by the draft bill envisage more severe punishments for broadcasts that are considered to be "separatist", "contrary to the principles and reforms of Ataturk," an "incitation to hatred and hostility," "praising terrorism", "obscene", "opposed to gender equality" or "encouraging violence".