In the TradeMarks survey published on Tuesday (19 May) by consultancy APCOworldwide, lobbying remains number one priority for trade associations and federations, but in second position comes coalition building rather than membership mobilisation, which ranked higher in 2014.

“While the ability and mandate to speak on behalf of the whole industry remains important, mobilizing the voice of individual members is becoming less so. Instead, identifying allies and forming strategic alliances on specific issues is now critical,” said Chris Levy, director for Europe of APCO Insight, concurring that the trend mirrors institutional changes.

As he took over as President of the European Commission last autumn, Jean-Claude Juncker decided to give responsibility for cross-cutting policy areas to six vice-presidents and the High Representative. They each lead a cluster of commissioners, who each hold portfolios relevant to the respective field.

Pointing at the digital economy, as an example, Levy said in practice broad-based coalitions add credibility to the industry’s position on an issue-by-issue basis. 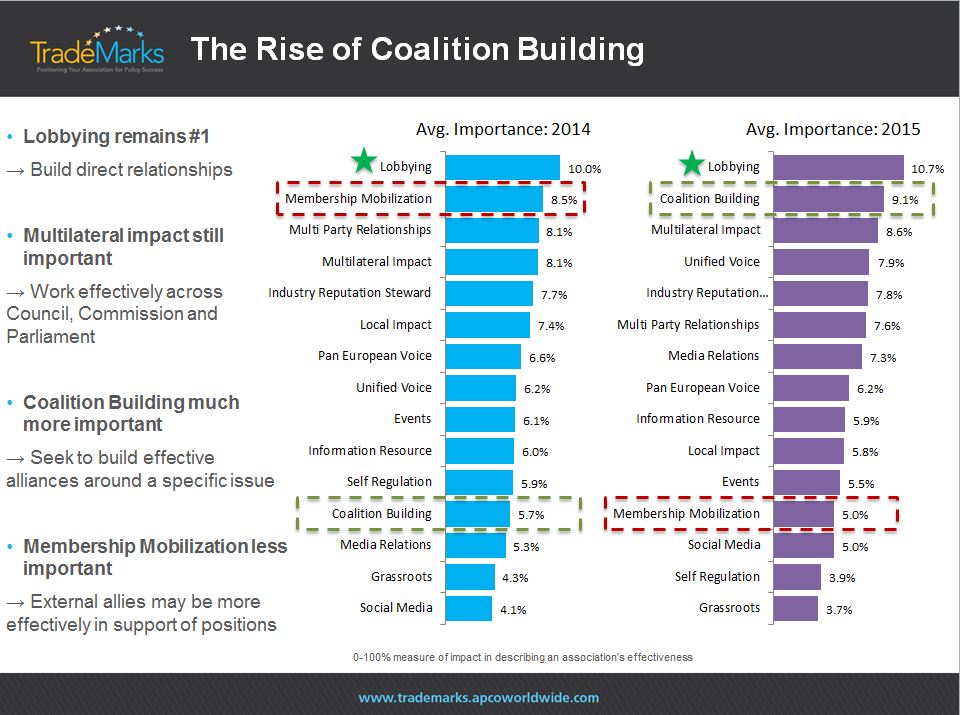 Although the need for forming multi-actor coalitions is an important new development, the more traditional form of engaging with stakeholders continues to be essential in the lobbying practice.

Another particular new development is the boost in media relations priorities. Whereas in 2014, communication with media ranked at 5.3%, this year it polled at 7.3%.

This can be explained by the tendency among communications that traditional media strategy is more effective than just relying on social media.

“In recent years, there was the assumption that in the increasingly interconnected and digital world, all organisations should be highly active on social media. For the second year running, we see that social media has low impact in effectiveness,” added Levy, stressing a more traditional communication strategy remains more adequate in the lobbying business.