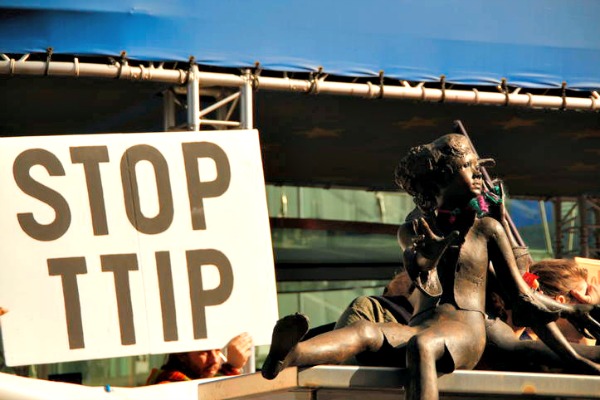 EXCLUSIVE / A tweet by the US embassy in Berlin offering grants of up to $20,000 for pro-TTIP projects has triggered a row with campaigners dismissing it as propaganda that reveals a desperate shortfall of original ideas in the US establishment.

The Transatlantic Trade and Investment Partnership (TTIP) is a free trade agreement currently being negotiated between the EU and US which its proponents say would remove tariffs on goods and services worth billions of dollars, and offer a massive boost to jobs and growth.

But environmentalists, unions and health campaigners are concerned that its investor-state provisions could lead to a spate of lawsuits from corporations claiming that EU legislation breaches their legitimate expectations of profit.

The tweet from the US embassy, translated from German said: “Are you pro-TTIP and angry at the negative coverage it’s been getting? Send us your ideas and we’ll support you!”

US diplomats say that the tweet was intended to spark a contest that would raise the tone of the public debate and move it beyond the image of “the famous chlorinated chicken,” as Peter Claussen, a US diplomat at the Berlin embassy put it.

However, many of the tweeted replies to the post were not enthusiastically supportive:

“@U.S. Embassy: Your TTIP PR will not save this project no matter how much money you paid,” one said.

“@U.S. Embassy here is my proposal: Democracy has never been so cheap: On sale at only €545 per year per household!” said another

“At first I thought this #TTIP campaign by @U.S. Embassy was satire…” a third read.

“Frankly we had an awful lot of responses to these tweets which were not particularly positive,” Claussen told EURACTIV.

“A lot of the [TTIP] discussion has been very un-nuanced,” Claussen said. “We were looking for ways of encouraging people with different perspectives by providing a venue for them and asking: ‘Is everybody against this or do some people have a different perspective? We wanted to open up a conversation, which is what social media is for’.”

The embassy was looking for positive ideas that supported TTIP he said, but campaigners countered that this was a mission the US government should not be undertaking.

“As a public administration you have a different responsibility,” said Pia Eberhardt, a spokeswoman for the Corporate Europe Observatory, an activist group campaigning against excessive corporate influence and lobbying. “It would be an OK position for industry to take but the US government has a duty to negotiate for its whole population, not just the big industrial sector,” she told EURACTIV.

“If large sections of the population are coming out against that agreement, the appropriate thing would be to reconsider and listen to the voices of your critics,” she added.

A Pew Research Study recently reported that a majority of Germans and Americans backed a TTIP agreement. But the same research paper also found that 96% of Germans trusted European environmental protection while only 2% trusted the US’s corresponding regulatory framework.

In response, even centre-right German politicians have begun taking sceptical positions about the desirability of an agreement. For Washington, such phenomena merely proves the need for new initiatives, such as the tweet contest.

“This image of the chlorinated chicken is a stereotypical way of over-simplifying and demonising the nature of the debate, suggesting that standards are different [in the US] and that’s something that politicians have also addressed in Germany,” Claussen said.

In its place, he suggested an image of two partners who have been working hard for years to improve trade relations, shaking hands.

Ideas sent in for the initiative so far have ranged from conferences to speaker programmes, online activities, and various digitally-linked online programmes, he said, adding that all of Europe’s US embassies were “reaching out and doing support work” but the tweet contest had been the brainchild of the Berlin embassy alone.

The US embassy’s literature on the project says that grants could also go to projects aimed at creating ‘a Twitterfall wall during a conference’, online discussion forums, TTIP websites, and digital posters in German with QR codes to inform about TTIP objectives.

“Because of the nature of the medium, we assume that young people may respond more energetically than others,” Claussen said.

Campaigners though dismissed the enterprise as a propaganda campaign illustrating a lack of original ideas in the US embassy and a PR campaign that it was losing.

“It is a clear and definite sign of a first success of this growing movement against TTIP,” Eberhardt said. “I’m sure there is a fear that they have lost the public debate in the last months – at least in Germany – and so they are intervening with more resources.”

“But it is also a sign that defenders of the agreement in government and business will invest much more in the coming months to sell TTIP to the public,” she cautioned.

Corporate Europe Observatory says that industry lobbyists are currently hiring PR representatives and are expected to escalate pro-TTIP campaigning in the months ahead.

0 responses to “US embassy in Berlin sparks TTIP Twitter tangle”