The European rail network ferries millions of us to and from work every day. Yet rail representatives felt compelled to plead ‘don’t forget rail’ in Brussels this week, saying it was at the bottom of all priority lists despite growing concerns over the expected impact of Brexit.

The rail industry is responsible for 577,000 jobs and €143 billion of economic output across the bloc.

Speaking at a EURACTIV event ‘What will Brexit mean for Europe’s railways?’ on Tuesday (20 February), Wright and other rail representatives said preparations were underway for a transition period after the UK’s departure from the EU in March 2019.

“Sadly, Brexit is happening – it’s the cards we have been dealt. Getting it right for the rail industry will be a barometer for whether Britain and Europe can prosper together in the decades ahead,” said Wright.

“Everyone in the rail sector is worried,” added Karima Delli MEP, who chairs the European Parliament’s Transport Committee.

“For sure Brexit will have an impact on the sector because the EU and UK are connected by a railway, the Channel Tunnel, whose rules of circulation may be affected. Can the Tunnel still be competitive in case of new customs fees and additional administrative burdens?”

Changes will certainly be needed at the iconic Channel Tunnel, which connects the UK and France, and through which 10 million passengers and rail freight pass each year, the speakers warned.

“Infrastructure on both sides of the Channel Tunnel has been designed with a simplified process for goods in mind. Leaving the Customs Union will require investment in England and France,” said Wright.

“We are advising our members that we’re assuming a transition [period] and if we don’t get it, prepare for ‘no deal’,” said Darren Caplan, CEO of the UK’s Rail Industry Association (RIA) – which represents the rail supply-chain.

“I believe we need this transition period – a minimum 20 months – after Brexit,” added Delli. 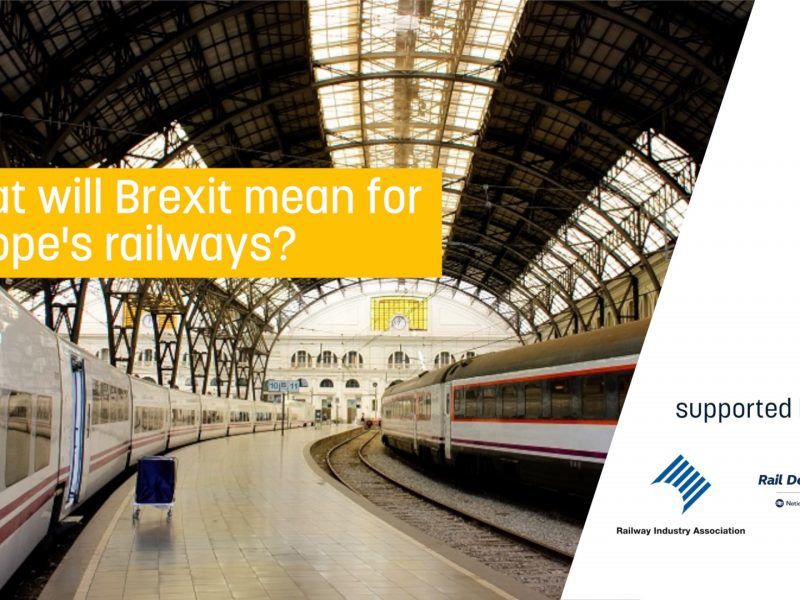 What will Brexit mean for Europe’s railways? Exploring 'EU27' perspectives

Late to the party

“We surveyed our members recently and Brexit wasn’t up there in the top five or six (most important) issues,” said Caplan, adding that “we have come to the [Brexit] party quite late, as a sector.”

The UK’s sector also relies heavily on around 40,000 workers from other EU countries, whose status could be in jeopardy.

“Around 20% of the workforce are from the wider EU – what will happen with free movement? Will we need to get people from outside the EU to make up the workforce?” said Caplan.

“We have two main asks. One is certainty [about the Brexit end-state]. Second, we want [just] one set of changes,” added Caplan.

In the meantime, UK lawmakers are expected to put around 40 pieces of rail-related EU legislation currently in the pipeline into UK law between now and the Brexit date. Chief among these is the technical pillar of the Fourth Railway Package, which deals with safety certification of railway companies and authorisations for vehicles.

The reforms were adopted by the EU in 2016 and must be transposed into national law by June 2019, three months after the UK leaves the bloc.

“The Fourth Railway Package technical pillar straddles ‘Brexit Day’ so it’s not entirely clear how that will be dealt with,” said Wright.

There appears to be little desire for change from industry representatives on either side of the Channel. The Community of European Railway and Infrastructure Companies (CER) has called for UK and EU operators to have continued access to each other’s markets, as well as harmonized standards and continued free movement.

That should be possible. “There is no huge desire in the UK rail sector to deviate on standards,” said Caplan.

The CER has also called for a Common Travel Area for passengers and seamless border procedures for rail freight travelling between Northern Ireland and the Republic of Ireland, dealing with another of the most vexed issues in the Brexit negotiations.

At the meeting, an Irish government representative pointed out that cross-border rail is significant between her country and Northern Ireland, and yet the focus on rail is too often focused on cross-Channel rail.

Wright said she did not foresee overseas companies ceasing to invest in the UK, commenting that “there is no appetite to close our market down. Likewise, our operators are seeking contracts overseas.”

But she conceded that “we are concerned those markets will close to us. This is all subject to negotiations at the highest level. We are sort of in the lap of the gods.”

“The negotiators must not forget rail. The industry has all bits of the Brexit jigsaw involved.”