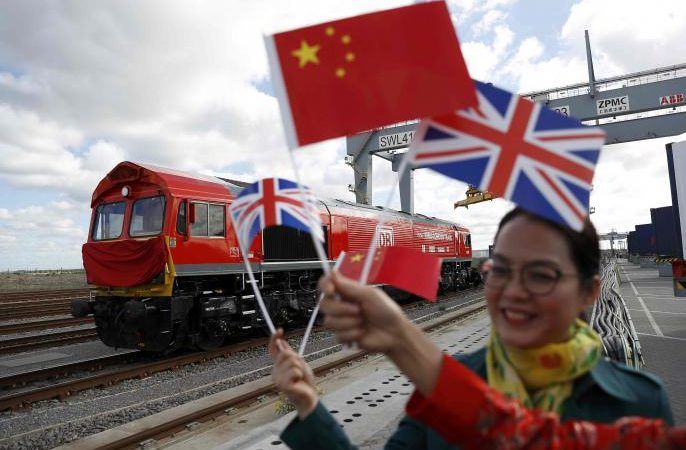 Chinese women wave flags at the official ceremony to mark the departure of the first UK to China export train, laden with containers of British goods, from the DP World London Gateway, Stanford-le-Hope, Britain, 10 April 2017. [Reuters]

The 12,000 km journey from eastern England to eastern China will take three weeks, around half the time needed for the equivalent journey by boat. The first freight train from China arrived in the UK in January.

The bright red train left a depot at Stanford-Le-Hope in Essex for Barking in east London, hauling dozens of containers.

A proud day today as the 1st ever rail service from the UK to China leaves London hauled by a @DBCargoUK locomotive https://t.co/OLllaXqi2W pic.twitter.com/hEKtYvTzL2

From Barking, it will pass through the Channel Tunnel into France and on to Belgium, Germany, Poland, Belarus, Russia and Kazakhstan before ending up in Yiwu in China.

Britain is trying to enhance its trade links with the rest of the world as it prepares to leave the EU in two years time.

The final containers being loaded onto the @DBCargoUK train, before it departs for Yiwu, China. pic.twitter.com/shPnPWCqwR

“This new rail link with China is another boost for global Britain, following the ancient Silk Road trade route to carry British products around the world,” said Greg Hands, a British trade minister.

Run by Yiwu Timex Industrial Investment, the Yiwu-London freight service makes London the 15th European city to have a direct rail link with China after the 2013 unveiling of the “One Belt, One Road” initiative by Chinese President Xi Jinping.

“This is the first export train and just the start of a regular direct service between the UK and China,” said Xubin Feng, chairman of Yiwu Timex Industrial Investment Co.

“We have great faith in the UK as an export nation and rail provides an excellent alternative for moving large volumes of goods over long distances faster.”

Freight train from Britain to China is on a mammoth journey along a modern-day "Silk Road" https://t.co/fULqrieJEO pic.twitter.com/rvJ3GynpQz