The UK government will fund the development of hydrogen trains, with researchers zeroing in on the final stages of a project aimed at cleaning up isolated parts of the British railway network.

Under the government’s ‘First of a Kind’ initiative, a team at the University of Birmingham will receive a grant worth £400,000 (€446,000) for completing detailed production designs and testing of a hydrogen train concept.

HydroFLEX is already a mature project, as a working demonstrator was rolled out at an industry event in June 2019. It is the first hydrogen train to run on the UK network and is the world’s first locomotive to have both fuel cells and electric batteries on board.

“To achieve the decarbonisation of the railway, we need to develop hydrogen technology, alongside electrification and batteries, as one of the means to get diesel trains off the network,” said the University of Birmingham’s railway research director, Alex Burrows.

The UK government has announced that it wants to remove diesel-powered trains from the network by 2040 and replace them with low-carbon alternatives. But that objective faces a number of obstacles.

New trains are an expensive investment for an industry that already operates on narrow margins and new technologies are currently a prohibitive expense for many operators.

Porterbrook, an industry partner on the project, is aiming to navigate that challenge by investing big in flexible trains that can run on hybrid power and can be retrofitted when components like hydrogen fuel tanks become more affordable.

CEO Mary Grant said that “we have proven this technology works, now is the opportunity for the government to truly energise the Green Recovery by creating a real market for a fleet of hydrogen-powered passenger trains.”

According to statistics dating back to 2018, only some 40% of the UK rail network is electrified, which pales in comparison to other European countries like Switzerland, whose lines are completely electrified, Luxembourg and Belgium. The EU average is around 54%.

Germany was the first country to adopt passenger hydrogen trains when it started a service back in September 2018. The Netherlands has since leapt aboard too; French train maker Alstom wrapped up testing in March. 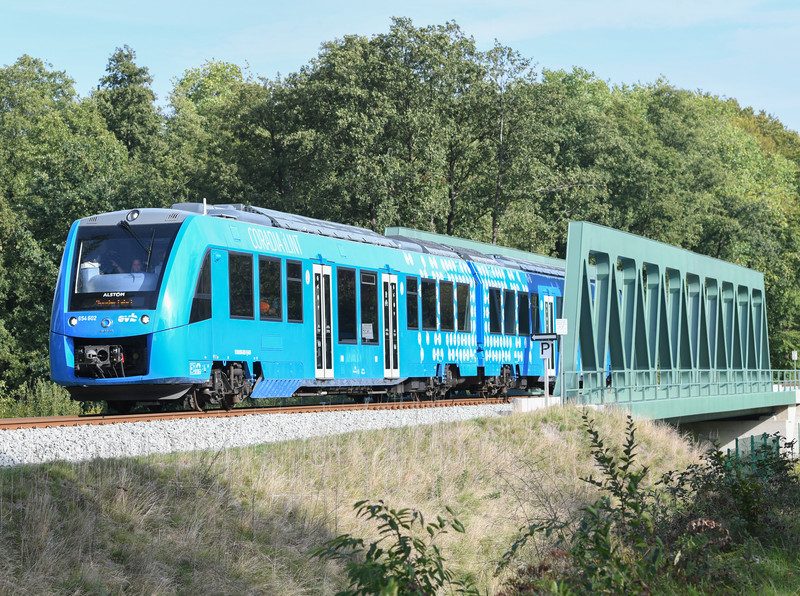 The Netherlands wrapped up testing on its first foray into hydrogen train technology at the weekend, as the European Commission readies a strategy for the clean fuel that will debut on Tuesday (10 March).

Both hydrogen- and battery-power offer an elegant and potentially zero-emissions alternative to track electrification, which is not always possible on lines that are particularly remote or pass through tunnels or under bridges.

In the UK, regional routes could be the perfect venue for trains that do not need expensive overhead wires. The government has already signalled it is unwilling to electrify branch lines, after scrapping a plan to retrofit the South Wales valleys with new infrastructure.

Under a 2012 strategy, hailed as the “biggest rail investment programme since the Victorian times”, electrification works would also have extended from London, through Cardiff to Swansea.

But cost-cutting measures scaled back the plan to just the London-Cardiff route, forcing operators to retrofit the electric trains they had purchased or ordered with diesel engines so that they can cover the final 70km of unelectrified track.

The final stages of the project were completed earlier this month when works were completed in an underwater tunnel between Wales and England, so that electrified services can now start.

It means that Wales no longer holds the dubious accolade of being one of only three European countries – along with Albania and Moldova – not to have a single metre of electrified rail.

A firm that aims to make the United Kingdom a leading force in sustainable battery technology has chosen Wales as the preferred site for its first giga-factory, which promises to bring thousands of jobs to one of Europe’s poorest regions.