Catalan official: The referendum is a matter of respecting democracy 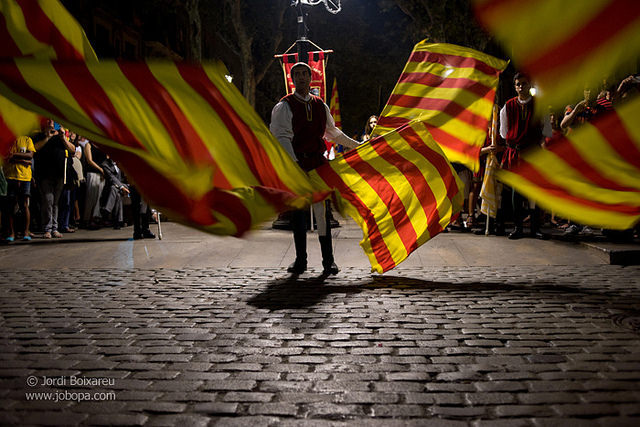 A performer waving Catalan flags in the streets of Barcelona. 10 September 2014. [Jordi Boixareu/Flickr]

EU officials believe that an independent Catalonia should be addressed politically and not legally, according to Roger Albinyana, secretary for Foreign and EU Affairs of the Government of Catalonia. EURACTIV Greece reports.

The Catalan official said that the planned independence referendum was a matter of respecting democracy. The only way to prevent continuing conflict is to let “people decide and vote”, he said.

“That’s why we are telling the Spanish government but also to the Spanish state institutions, the Constitutional Court included – which is an independent or supposedly independent – to think carefully about the negative consequences of preventing such a vote,” he said.

Last month, Artur Mas, the President of the Catalan government, signed a decree allowing a “consultation” on breaking away from Spain.

In an attempt to block the vote, Spain’s central government asked the Constitutional Court to declare it illegal on the grounds that it breaches the country’s constitution.

“It’s false that the right to vote can be assigned unilaterally to one region about a matter that affects all Spaniards,” Spanish PM Mariano Rajoy said in a statement. “It’s profoundly anti-democratic,” he added.

The Constitutional Court suspended the referendum. The Catalan regional government appealed the decision, hoping that the vote can actually take place on 9 November.

Unaffected by the Scottish “no”

Asked if the Catalan government was discouraged by the recent referendum in Scotland, which saw voters rejected independence from the UK, Albinyana said “not at all”.

“Because what we valued from the Scottish vote was not only that they could vote on their political future as a nation of the people of Scotland, but also because they could agree beforehand with the UK government the way this referendum was meant to be held”, he said.

This agreement “reinforced the Scottish people and the UK itself”, he said.

EU membership and the next day

Albinyana said it was still unclear how the process will go ahead because it is up to the Court to decide whether to keep the suspension or lift it.

But he stressed Catalonia could not be treated as a “third country” over the question of its EU membership.

Commission President José Manuel Barroso, had previously stated that any EU territory becoming independent will have to re-apply for membership.

“Catalonia and Catalonian individuals and companies already fully comply with the EU regulations. And therefore, we cannot treat Catalonia like a third country,” Albinyana said.

“It is also clear that there is no provision within the EU Treaties to describe a process like the one that is happening at the moment in Catalonia, because basically it is still an internal affair within Spain”, he added.

Once Catalonia is independent, negotiations will simultaneously begin with Madrid and Brussels, according to Albinyana.

The final decision of Catalonia’s EU future is in the hands of the European Council and not the Commission, he pointed out.

“The responsibility and the political initiative on how this matter has to be conducted, will be or should be in the hands of the European Council,” he said.

Asked if the Catalan government has held discussions with EU officials on what is going to happen in case of a “yes” vote, he confirmed unofficial discussion had taken place.

He said that the vote comes with the support of the large majority of the Catalan population and does not impair the Spanish constitution, which “does protect the right of expression”.

“You cannot prevent a political conflict by putting legal obstacles in front of it, as this will not solve the problem but worsen it,” he concluded.