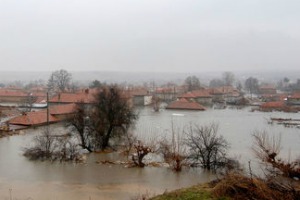 Arctic temperatures and heavy snowfall that have claimed hundreds of lives around Central and Eastern Europe have also exposed the severe stress placed on often dilapidated infrastructure in hard-hit Romania and in neighbouring Bulgaria.

Romania has experienced the heaviest snowfalls in 65 years and the conditions remain tough. Up to 3 meters of snow sealed off towns and villages, leaving them without electricity. Al least 68 people died from hypothermia after consecutive nights of temperatures that dropped to minus-25 degrees Celsius.

Authorities in the Romanian counties of Buz?u and Vrancea, which have been the most severely hit, have asked the central government to declare a state of high emergency. The number of deaths could grow higher, as the authorities are unable to reach all villages. News reports suggest 90,000 people are snow-bound across southern and southeastern Romania, while some 2,700 schools nationwide are expected to remain closed.

There is growing concern that warmer weather could unleash destructive floods in a country highly vulnerable to flooding. In recent history, flooding has caused extensive property damage in many parts of the country and unlike neighbouring Bulgaria, there are few dykes or dams to hold back the Danube.

The traffic at the Ruse-Giurgiu bridge, the only one uniting Romania and Bulgaria along their 300-km Danube border, has been repeatedly discontinued closed in recent days. As the river froze, ferry links between Vidin and Calafat as well as between Oryahovo and Bechet ceased operation.

The 2.8-km Ruse-Giurgiu bridge was built in 1954 and consists of a two-lane road and a double railway track. A second bridge is under construction at Vidin-Calafat with EU funds. It is expected to have four lanes, one rail track and a bicycle lane. The bridge project received international support in the context of the Yugoslav wars and the embargo against former Yugoslavia, as a way to channel traffic from Turkey and Bulgaria through Romania, bypassing the former Yugoslavia. Its completion has been postponed repeatedly, the latest one being reported for end-2012.

In Bulgaria too, the cold snap took human lives, at least 28, including 10 people who drowned when a dam broke and its icy waters swept through Biser, a village close to the border with Turkey.

Bulgaria, traditionally an electricity exporter, reduced power exports as a result of the cold snap and an accident at the Galabovo coal plant in the nation's centre, owned by AES Corporation of the United States. Coal extraction from the mines Maritsa-Iztok 2 have also been discontinued, largely because many of the workers could not get to the site due to inclement weather.

Following the accident at the village of Biser, the government checked similar infrastructure throughout the country. Some 600 dams present a threat to the population, Energy Minister Traycho Traykov said, and the government will announce on 20 February which dams would be partially emptied and which would be reconstructed.

It was also revealed that over the last 20 years, little or no investment had been made on smaller dams. Their property is often unclear. Many of them are leased and used for fish farming, for which they are not suitable. Their holders keep the water level high despite the risk of overflow and floods. In some cases it was found that agriculture workers had pierced holes in the concrete to illegally extract water, severely damaging the dams.

Romania has experienced the heaviest snowfall in the last 65 years during the month of February.

Some parts of Eastern Europe are experiencing the coldest snap in decades, with temperatures in some areas plummeting to nearly minus-40 degrees Celsius.