Parliament takes one third of the Juncker team hostage 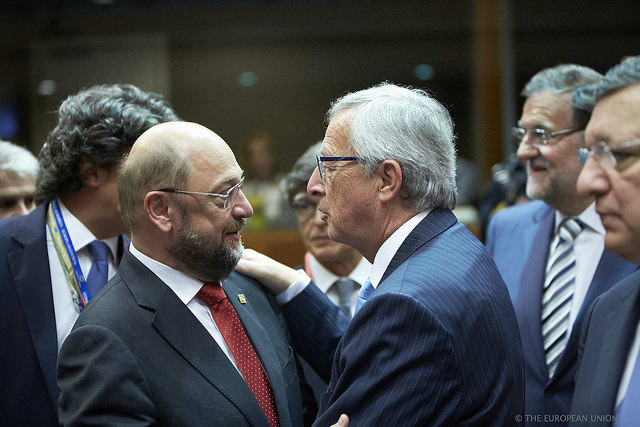 The European Parliament has taken so far at least six “hostages” among the commissioner-designates, setting the stage for difficult negotiations with the Commission, and a possible reshuffle of the proposed team of President-elect Jean-Claude Juncker.

With 21 hearings already held, and six more to come, the European Parliament has expressed reservations over at least six candidates.

Czech MEPs were the first to admit that their compatriot, V?ra Jourová, Commissioner-designate for Justice, Consumers and Gender Equality, could be taken “hostage” by the parliament following an unconvincing performance at her hearing.

But they also indicated that another candidate, Spain’s Miguel Arias Cañete, was in bigger trouble, and that Jourová should perhaps prepare for a hearing to obtain the energy portfolio, which was assigned to Cañete.

Indeed, Cañete has taken so much heat from MEPs over his links with the oil industry, and last-minute changes in his statement of financial interests, that it appears unlikely he can remain in the race.

Hungary’s Tibor Navracsics, Commissioner-designate for Education, Culture, Youth and Citizenship, also appears in difficulty, mainly because he is seen as a faithful supporter of Prime Minister Viktor Orbán’s model of “illiberal democracy”.

To restore the political balance, Romania’s Socialist candidate Corina Cre?u, Romania’s Commissioner –designate for Regional Policy, is also in limbo, as the centre-right European Peoples Party (EPP) found her performance unconvincing. Cañete and Navracsiscs are EPP-affiliated, and Jourová is a Liberal.

Two more commissioners-designate feel the heat of the Parliament, but they appear of a different category, also because of the size of their countries. France’s Pierre Moscovici, to whom Juncker assigned the portfolio of economic and financial affairs, is suspected of being a Trojan horse for Paris, with the mission to allow his country to exceed his budget deficit without facing sanctions.

Similarly, the UK’s Jonathan Hill, Commissioner-designate for Financial Stability, Financial Services and Capital Markets Union, is seen by some MEPs as the envoy of London in the EU executive, and has been called “a fox in charge of the henhouse”.

EURACTIV asked Mina Andreeva, spokesperson for Juncker, what would follow after the “hostage-taking” and whether the President-elect would engage in talks with the Parliament.

Andreeva said that Juncker had been following the hearings with great interest, and that he was satisfied with the performance of the members of his team.

“Mr Juncker is in close contact with [Parliament] President [Martin] Schulz, and of course we will wait for the hearings to finish and then we will discuss the overall assessments with the Parliament”, she said.

Asked if Juncker was satisfied even with the hearing of Cañete, Andreeva said she believes all candidates have convincingly demonstrated their competences and European commitment, including Cañete. The hearings will end on 7 October, with six more commissioners-designate to face MEPs [see the EURACTIV Hearing calendar].

In theory, Juncker can re-shuffle the attributions, or even ask some of the member countries to send another candidate for commissioner. Without any doubt, replacing commissioners would require more time and the indicative calendar for entry in function of the Juncker college would have to be adapted accordingly.