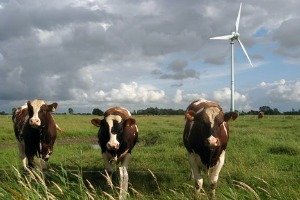 Clean energy projects in rural areas are still being held back by administrative burdens, one year after EU member states began implementing their National Renewable Energy Action Plans (NREAPs), EURACTIV has learned. However, Brussels believes the situation is improving.

"Lengthy and cumbersome authorisation and planning procedures continue to be important barriers to the growth of the renewable energy sector in the EU, and it is especially the case for electricity," an EU official told EURACTIV.

Internal research suggested that renewable energy promoters and developers were "most concerned with long lead times and high costs of obtaining permissions," according to the official.

"However, we are convinced the situation is improving," he added.

Brook Riley, a spokesman for Friends of the Earth Europe, an environmental pressure group, cautiously agreed. "For sure the Renewable Energy Directive is having an impact because it sets out binding targets that countries have to meet in their NREAPs," he told EURACTIV.

But member state implementation of the Directive was patchy. "There's a big difference between Germany and Poland on renewables," Riley said.

The EU acknowledges this problem but maintains that renewables should be considered a "priority in all local planning and infrastructure," according to the official, with "simplified procedures applied to smaller and decentralised renewable energy producers."

Despite making up 90% of the EU's territory and 56% of its population, rural communities often face problems accessing clean energy at an affordable price. They have a limited choice of energy options – oil and coal are still commonly used – and are more vulnerable to supply disruptions.

But renewable projects still tend to run into opposition from countryside residents, angry at unsightly wind turbines and overhead cables. "To get public support for the new infrastructure, we can bury cables rather than put them overhead," Riley suggested.

Energy companies often oppose such measures because they could cost 5-7 times more, Riley said. "But if you’re held up for 10-15 years because of public opposition, it would have been far cheaper to have built underground to begin with," he said.

Rural energy campaign groups such as the Future of Rural Energy in Europe (Free) point to other areas of concern for countryside dwellers. Rural housing is also frequently energy inefficient, they say, and because of their dispersed nature, rural communities may suffer from poor grid connectivity.

The EU official told EURACTIV that Brussels needed to help improve such energy infrastructure because of the "huge investment challenge" involved in meeting the EU's 2020 targets on clean energy.

But "under no circumstances can EU policy in the field of permit granting procedures for new infrastructures undermine the EU's legislation in the field of environmental protection," he stressed. Stakeholder and citizen consultation periods should also not be shortened, he added.

The EU believes that smart grids offer a potential way to help rural consumers save energy, and money, by shifting their electricity usage away from peak hours. One of the 'greenest' benefits to a smart grid update would be "the fuel savings and CO2 reduction from [not] having to send meter-readers to rural locations or travel to customers' homes for troubleshooting," the official said.

The Commission is currently planning a legislative proposal on energy infrastructures that it says will increase transparency and increase stakeholder involvement. The proposal will establish a "regime of European interest" to streamline the permit granting process and fix a time limit for decision-making processes.

The initiative, which will be unveiled in late October, will try to extend and upgrade the EU's power and gas grid network, delivering renewable power to areas where it is needed.

Speaking in Wroclaw, Poland, on 20 September, the EU's energy commissioner Günther Oettinger announced that the €200 billion which EU countries need to invest over the next 10 years would be partly met by promoting private funding with public money.

"In our proposal we have called for smart co-financing by means of project bonds and grants, and perhaps other financing instruments," he said.

By 2014, a single electricity market is due to be created across the EU, to deal with rising demand, changing demand patterns, and variable supplies.

On 17 November 2010, the European Commission adopted the Communication "Energy infrastructure priorities for 2020 and beyond - A Blueprint for an integrated European energy network", setting out its plans for improving energy infrastructure, despite private and public funding constraints.

A legislative proposal is expected to follow in October 2011, addressing regulatory and financial issues through an Energy Security and Infrastructure Instrument and mainstreaming energy priorities in different programmes.

EURACTIV understands that it will identify a limited number of European priority corridors, which must be implemented by 2020, in the context of existing legislation and recent changes in different member states' energy mixes. It will also propose a new method to identify concrete projects "of common interest". These should have a "significant cross-border impact" – between member states, and also with third countries.

The proposal will recommend simple, transparent and measurable criteria reflecting the EU's policy objectives in terms of the integration of renewables, completion of the internal energy market and security of supply. The EU will measure its progress by the degree to which it develops a common energy system-wide cost-benefit analysis methodology, to assess the criteria for all future projects.