EU draft rules will force countries to get rid of road toll systems that charge by day and instead switch to charging by how far vehicles drive. [Shutterstock]

Sweden, Lithuania, Latvia, Denmark, Romania, Bulgaria, the Netherlands, Belgium and the UK will need to stop charging truck drivers based on how many days they spend on roads by the end of 2023. The countries will be forced to switch to a toll system that collects money from trucks according to how many kilometres they drive, according to a draft proposal obtained by EURACTIV.com.

Austria, Bulgaria, the Czech Republic, Hungary, Romania, Slovakia, Slovenia and Germany—which just passed a controversial charging law for cars this spring—will also have to get rid of their stickers that charge passenger vehicles by day, known as vignettes, by the end of 2023.

The Commission has until now only regulated charging rules for trucks. The new proposal is the first EU law affecting how member states charge passenger cars to use roads.

Violeta Bulc, the EU Commissioner in charge of transport policy, is expected to announce the legal changes tomorrow (31 May), along with a new proposal requiring road toll providers to go digital and allow drivers to use one device to pay their way as they travel throughout the EU—without any delays or extra charges at borders, much like the EU law that will get rid of mobile roaming fees within the bloc starting next month.

Another proposal expected out tomorrow outlines how truck drivers from lower-wage countries can operate in other parts of the EU—a point of contention that has pit western member states against eastern EU countries.

The Commission has advocated for road toll systems that are based on distance because they encourage drivers to use their vehicles less, and therefore do not pollute as much.

“Time-based user charges do by nature not accurately reflect infrastructure costs actually induced and, for similar reasons, are not effective when it comes to incentivising cleaner and more efficient operations, or reducing congestion. They should therefore be gradually replaced by distance-based charges, which are fairer, more efficient and more effective,” the new proposal reads.

Another part of the proposal mentions a drastic reduction in road toll fees for trucks that do not produce any harmful emissions at all. The Commission wants to calculate detailed CO2 emissions data and propose a so-called delegated act, another measure that will be added to the legislation after it’s passed, to adjust fees according to how much CO2 vehicles emit.

“Zero-emission vehicles shall benefit from infrastructure charges reduced by 75%,” the proposal reads.

EU transport chief Violeta Bulc has defended the European Commission’s move to vouch for a controversial German road toll bill that has spurred blistering critique and threats of a lawsuit from 11 neighbouring countries.

The draft EU rules will force Germany to discard its new controversial system for passenger cars by 2023 and switch to distance-based tolls. That means that Germany’s Transport Minister Alexander Dobrindt will have sparred with the Commission in vain: the EU executive started a lawsuit against Germany in 2015 on grounds that the charging rules discriminated against non-German drivers, but withdrew the case earlier this month after Dobrindt made changes to the law.

But the Commission’s proposal will make environmental groups happy. Campaigners have argued for a transition to toll systems that charge by kilometre because they could encourage drivers to take the most efficient route.

The plans for “differentiating road charges by carbon emissions, and rolling out an EU-wide system of distance-based tolling” could help road transport “to clean up its act while paying for its environmental, health and other costs to society”, said Samuel Kenny from the NGO Transport & Environment.

Others in Brussels see the new rules as an overstep into national law that will only add costs and bureaucracy.

The International Road Union, which represents haulage companies, has pushed to hold onto the time-based vignettes, arguing that it’s a cheaper, simpler system.

“You don’t necessarily need the tolling booths or the infrastructure that you do for tolling. Time-based systems are easier to operate and cheaper,” said Stuart Colley, communications director for the IRU in Brussels.

The new rules also set a cap on how much member states with time-based vignettes can continue to charge drivers—presumably until they’re forced to switch to a toll system by 2023 at the latest.

During the battle over Germany’s road charging law last year, the Commission pointed out that vignettes for shorter-term periods of time are more likely to be bought by visitors from other countries. Prices on those shorter stickers should line up with the rate charged for an annual vignette so foreigners aren’t overcharged, the executive argued at the time.

Under the draft proposal, a ten-day vignette should cost no more than 8% of what drivers pay for an annual pass. The Czech Republic, for example, charges more than that: drivers of passenger cars pay €12 for a ten-day vignette there, while the annual fee is €57, according to Commission figures.

Truck drivers should pay no more for a day pass than 2% of an annual vignette for trucks, according to the new rules.

The Commission’s plans have also divided MEPs, with some arguing in favour of tolls as a way to reduce pollution and others criticising the move as a crackdown on road transport.

Austrian centre-right MEP Claudia Schmidt told EURACTIV that, “Not one single time in history has a toll or a fee ever reduced pollution.” She argued that the Commission should promote vehicle technologies instead of “penalising car users”.

Karima Delli, the French Green chair of the European Parliament’s Transport Committee, argued the Commission should go a step further and require member states to impose road tolls on every kind of vehicles–trucks, buses and cars.

The new proposal only changes rules for countries that already have road charging systems, but does not require countries to set up new tolls if they don’t have them.

“To be efficient and to prevent any kind of discrimination, the ‘polluter-pays’ pricniple must apply over the whole continent considering climate change costs,” Delli said. 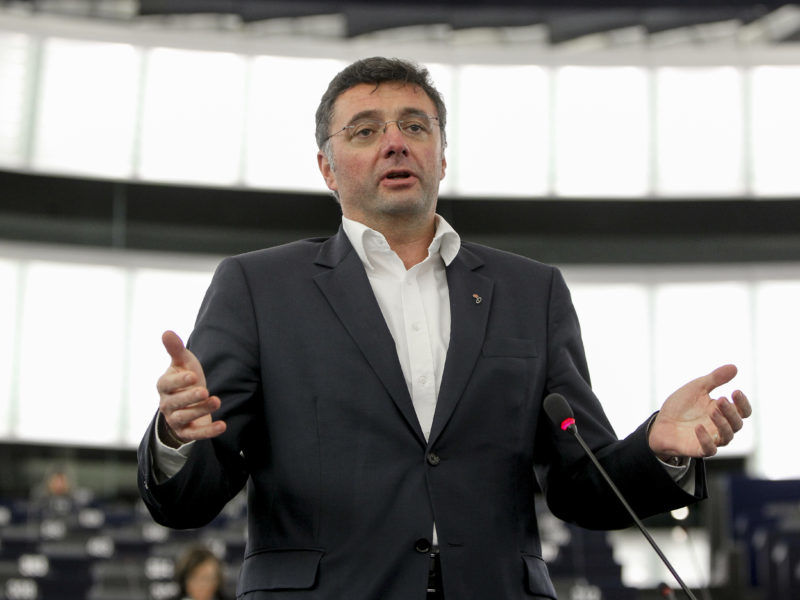