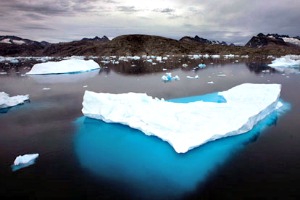 The paper by scientists at the Alfred Wegener Institute for Polar and Marine Research in Germany discovered that solar radiation through ‘first year ice’ was three times greater and allowed 50% more energy absorption than was with the case with ‘multi-year ice’.

This in turn could change the face of the Arctic.

“Ice melt and less sea ice cover will [themselves] make it more likely that more ice will melt in the next years ahead,” Marcel Nicolaus, one of the report’s authors, told EURACTIV. “We see that light transmission through sea ice will increase in the future.”

While previous studies had indicated that solar radiation was melting sea ice at the surface, and a warmer ocean was melting it at the bottom, the new paper found that Arctic ice sheets were increasingly melting from within too.

“We showed here that the older multi-year ice is covered with fewer ponds at the surface, while the newer, younger ice has more ponds,” Nicolaus said.

“This albedo radiation transfer effect will be more pronounced in the future,” he added.

Increased Arctic light transmission will also affect sea life in the Arctic ocean, although more research is needed to understand how.

“We didn’t do biological studies but that’s definitely the way to go to connect these kinds of observations,” Nicolaus said, over the phone from his office in Bremerhaven. “I’m not a biologist and I can’t say how it could affect [sea life], I can just say that it will change it.”

Sea ice surface cover in the Arctic region plunged to a new record low of 24% last year, some 50% less than climate scientists at the UN’s Inter-governmental Panel on Climate Change (IPCC) had predicted.

In the 1970s when the first satellites tracked the frozen continent’s topology, sea ice usually covered about half of the ocean at its lowest point.

“A continuation of the observed sea ice changes will increase the amount of light penetrating into the Arctic Ocean, enhancing sea ice melt and affecting sea-ice and upper-ocean ecosystems,” says the report, which was published in the journal Geophysical Research Letters.

Some climate scientists believe that feedback loops could easily develop, as warmer oceans exponentially melt more ice and reduce the Arctic’s reflectivity of solar heat back into space, so warming the planet still further.

This process could potentially melt the pivotal land-based Greenland ice sheet – so increasing sea levels – and release methane hydrates, frozen beneath the surface of Arctic permafrost and on the sea’s floor.

Greenland’s ice sheet is already melting three times faster today than it did in the 1990s.

The IPCC’s fourth assessment report in 2007 warned that “partial loss of ice sheets on polar land and/or the thermal expansion of seawater over very long time scales could imply metres of sea level rise, major changes in coastlines and inundation of low-lying areas, with greatest effects in river deltas and low-lying islands.”

The report notably does not exclude rapid sea level rise within a century, given global temperature increases of between 1.9 to 4.6 degrees Celsius, which are well within the bounds of possibility.

The scientists at the Alfred Wegener Institute are at pains to stress that the Arctic thaw they have observed will not directly increase sea levels, as the transformation of ice into water does not affect its mass or volume.

But they add the caveat that the process could well contribute to an acceleration of more general global warming that melts land-based glaciers and causes run-off that swells the size of the world’s oceans.

“The more surface area covered with ice that we lose, the more energy we will absorb into the oceans and the more we will help these feedback processes to increase warming and more melting,” Nicolaus said.

The global community is currently engaged in negotiations to agree a successor to the Kyoto Protocol, which expired in 2012.

The scientific consensus that humans are responsible for global warming is now compelling with over 90% probability, according to the 2007 report from the Intergovernmental Panel on Climate Change (IPCC), a UN-backed scientific body.

But uncertainties remain surrounding the extent of future temperature rises and the effects they will have on the earth's complex ecosystem.