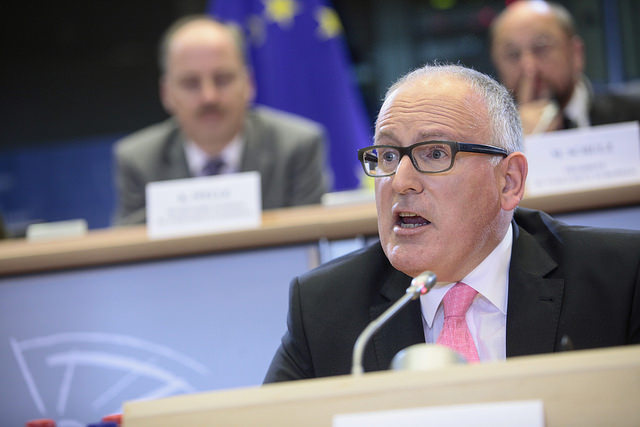 Frans Timmermans is in charge of the Commission's ''better regulation'' push. Here he addresses MEPs in the European Parliament. [Martin Schulz/Flickr]

EXCLUSIVE / The European Commission will call on MEPs and national governments to commit to its drive for better regulation, and submit substantial changes to bills to scrutiny by experts, according to a leaked draft of its strategy to cut red tape.

The Commission communication criticises the Parliament and Council of Ministers for amending legislation without taking full account of their “impact or burden”.

The executive will push for a new agreement with the co-legislators, so “that citizens, businesses and society at large can look to the EU and see that it has improved things in their daily lives”.

“The European Parliament and the council should, therefore, mirror the Commission’s commitment to better regulation, as must member states when implementing Union law,” the paper, which is subject to change, says.

Better regulation, led by First Vice-President Frans Timmermans, is part of the Juncker Commission’s desire to make EU policymaking “big on the big things and small on the small things”.

“The Commission cannot, and should not, be involved in every issue in Europe,” the leak states, in what could be interpreted as a response to growing euroscepticism across the EU.

“We are paying particular attention to the rules that affect small and medium-sized enterprises, who too often feel shackled by red tape,” it adds.

Critics suspect the policymaking revamp masks a pro-business push towards deregulation, but the draft stresses that is not the case.

“Better regulation is not about “more” or “less” EU regulation; nor about deregulating or deprioritising certain policy areas or compromising the values that we hold dear,” it reads.

New guidelines on better regulation will ensure economic, social and environmental impacts are considered in Commission analysis, it adds.

The Commission calls on the Parliament and Council to;

New ways had to be found for the institutions to discuss what has and has not worked. “Without this, there can be no meaningful attempt to cut red tape and make unnecessary changes to laws,” the leak says.

Friends of the Earth Europe’s Paul de Clerk said impact assessments on amendments would “give a group of unaccountable persons a huge influence on decisions from the highest elected European bodies, the European Parliament and the Council”.

“This proposal is a huge power grab, where the Commission takes away power from Parliament and Council,” he said. Moves to stamp out gold-plating were problematic, he added, because EU rules were often minimum standards based on compromises.

The Communication also takes a swipe at the trialogues – the three-way talks between the major institutions to hammer out deals on laws.

“Deals are found in closed, informal meetings without taking full account of the impact or burden that compromise amendments may impose,” it says.

EURACTIV exclusively revealed that the European Ombudsman, who investigates maladministration, is considering launching a probe into the secretive negotiations.

The Commission will strengthen its Regulatory Fitness and Performance Programme (REFIT), which will be “central” to the work of the Commission.

A new REFIT stakeholder platform will be established. It will involve experts from business and civil society and all 28 member states, and be chaired by Timmermans.

A new website feature called “Lighten the Load – Have your say” will be set up so that the public can comment on any EU law at any time.

“Tell us what you find irritating, burdensome or in need of improvement,” the communication says.

Any stakeholder will be able to give opinions and make suggestions as to how EU laws can be improved, the draft, says.

Consultations will now cover “the entire lifecycle of a policy”. At the start of an initiative “Roadmaps” and Inception Impact Assessments” will be open for comment from the public.

12 week public consultations will be held during the impact assessment process and during evaluations of existing laws.

After the Commission adopts a bill, the public, and interested organisations, will have an eight week window to give feedback. That will be given to the Parliament and Council before they debate a bill.

For the first time, draft delegated acts and implementing acts – additional non-essential clauses on how to put the law into practice – will be open to public consultation for four weeks.

A new reinforced Regulatory Scrutiny Board will replace the Impact Assessment Board. It will have six full time members and three hired from outside of the EU institutions.

Impact assessments will need to be backed by the board, which will also scrutinise existing laws, before the Commission will consider a policy proposal.

The new board was announced in December, but EURACTIV understands it may ultimately act for all the institutions, and not just the Commission.

But critics are concerned that the board would have a veto on a bill before the Parliament and Council can debate it. They also believe that any independent board member is likely to be extremely business friendly.

Some civil society organisation are worried the lighter regimes and exemptions for SMEs and micro-business could hit environmental, health, safety and consumer standards.

The Commission never comments on leaks.

Jean-Claude Juncker, the new president of the European Commission, pledged to refocus the EU executive on the bigger political issues of the day and cut regulations seen as unnecessary or hampering business activity.