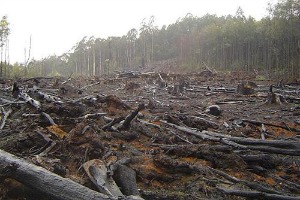 EXCLUSIVE: Bioenergy production often increases greenhouse gas emissions in the short term even though the EU currently counts it as a carbon neutral technology, according to an unreleased EU report, which EURACTIV has obtained.

Bioenergy made up over two thirds of the EU’s primary renewable energy production in 2009, according to Eurostat, and will account for more than half of EU states emissions reductions planned for 2020 in their National Renewable Energy Action Plans.

But a literature review conducted by the EU’s Joint Research Centre (JRC) concludes that, according to best known science, “the use of roundwood [trees] from forests for bioenergy purposes would cause an actual increase in GHG [greenhouse gas] emissions compared to fossil fuels in the short term”.

This is because burning a tree to produce bioenergy – in the form of wood pellets or chips – releases all the carbon that the tree has absorbed in its lifetime. It also reduces the carbon sink able to absorb new carbon, at least until it has been replenished by an equivalent carbon absorbing stock.

In the interim, a ‘carbon debt’ is created, with more emissions being created than are reduced by bioenergy use.

The EU report finds that “with a proper accounting, roundwood bioenergy would not contribute to short term policy objectives such as the EU 2020 targets, although the use of wastes and residues could make a sizeable contribution”.

Such conclusions echo an opinion by the Scientific Committee of the European Environment Agency last year, and raise questions as to whether unaccounted bioenergy should continue to count towards EU renewable targets.

“I think we should do carbon accounting [towards the renewable targets],” said Professor Detlef Sprinz, the chairman of the independent scientific committee advising the EU’s European Environment Agency.

“We want to do good things but we unintentionally increase carbon and other greenhouse gas emissions,” he told EURACTIV. “We need to link good policy actions to proper accounting and avoid unwanted effects.”

The EU’s carbon debt problem had arisen because bioenergy was “the easiest and cheapest compliance option,” according to Nuša Urban?i?, the fuels programme manager for Transport and Environment, a green pressure group.

“Burning biomass can count towards your renewable energy oblications for 2020, and your Emissions Trading System [ETS] target, because it is considered a zero emissions technology,” she told EURACTIV.

Ironically, the higher the carbon price becomes, the greater the incentive to burn fuel from bioenergy, Urban?i? said.

“It is kind of like biofuels for transport in that it fits in the system,” she added. “You don’t have to change very much or bother with super smart grids, you just put the bioenergy in and burn it within your existing system.”

EURACTIV obtained the draft JRC paper after submitting a Freedom of Information (FoI) request which was delayed for four months and finally reattributed to the energy directorate of the European Commission.

Previous requests for similar documents relating to indirect land use change (ILUC) studies for biofuels have also been stalled in similar ways.

With the new JRC report, EURACTIV understands that some textual issues relating to the definition of the ‘carbon debt’ concept remain unresolved. But the draft itself has substantially been finished and release is only being held up by copyright issues.

Even so, one official admitted that there had been “internal problems” with the document. The wider issue of sustainability criteria for bioenergy is being discussed at cabinet level, ahead of the submission of a new set of proposed rules by the EU’s energy directorate.

These had been planned to go into inter-service consultation last week but were delayed, without explanation.

Some Brussels sources blame a perceived lack of transparency in Brussels on a tendency to mask the ways in which EU policy objectives can be set before the requisite scientific research has been conducted.

“The whole ILUC [in biofuels] story risks repeating itself with biomass,” one told EURACTIV.

“We have again a policy that shoots first and aims later,” Urban?i? agreed.

There are no agreed international carbon accounting rules for forest management. Bioenergy is simply considered to be ‘carbon neutral’ by the ETS and Kyoto Protocol alike, and this is exacerbated by the fact that within the EU “GHG emissions accounting is highly variable,” according to the JRC paper.

“Less than two-thirds of the member states account for forest management, only three for cropland and/or grazing land management and only one for vegetation.”

Experts say that even if this carbon accounting were extended, it would still be ineffective for as long as the rules reward the creation of net carbon deficits under the EU’s renewables policy.

In June, the European Commission proposed new harmonised guidelines to account for greenhouse gas emissions from forests and agriculture but these would not include sustainability criteria for bioenergy.

An EU source told EURACTIV that “there are indications we can allow the use of biomass but first it must be regulated.”

“Sustainability criteria must be taken into account,” the source added.

The directive included voluntary and contested sustainability criteria for biofuels for transport as well as bioliquids in electricity, heating and cooling. It also obliged the European Commission to publish by December 2009 a report on the requirements for a separate sustainability scheme for the use of biomass other than biofuels or bioliquids.

Biomass, either solid or gaseous, is biological material that usually derives from forested wood, agricultural crops and residues, or from biodegradable waste such as municipal waste and sewage sludge. In order to produce energy, it can be converted directly into heat or electricity or into biofuels or biogas.