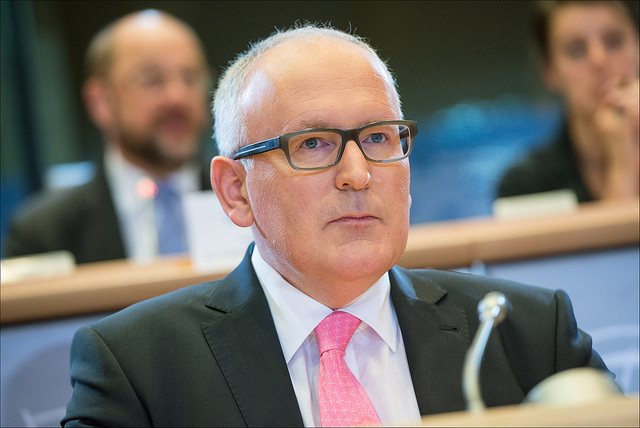 EU judges have limited the European Commission’s right to withdraw legislation, raising doubts over its drive to cut red tape and its decision to axe the Circular Economy package of waste laws.

The European Court of Justice has set three conditions the executive must meet before it takes a pending bill off the table.

Although the case is unrelated to the Circular Economy package, experts told EURACTIV that the decision meant the controversial ditching of EU waste, incineration and recycling laws could be challenged in the ECJ.

EURACTIV understands it is only the Council of the European Union – representing the 28 EU member states – or the European Parliament – that would be influential enough to sue the executive.

But they have only two weeks left to challenge the decision to drop the circular economy in the European courts.

After taking power in November, the Juncker Commission unveiled its push for “better regulation”, which involves reviewing all existing and pending legislation. In December, First Vice-President Frans Timmermans announced 80 pending bills would be dropped, including the Circular Economy package.

The executive withdrew the six bills in the package, proposed under the previous Barroso Commission, despite the objections of many MEPs and EU environment ministers.

The executive said the Council’s approval of its work programme and the Parliament’s inability to secure a joint resolution to save the rules endorsed the decision to pull the package, and submit a “more ambitious” proposal.

The College of Commissioners’ decision was published in the Official Journal of the EU on 7 March. EU treaty law states that the Commission’s decisions can be challenged within two months of publication. The ECJ also gives about an extra week’s leeway after that date.

Environmental campaigners are considering their next move. But they believe the 14 April decision ensures that the Commission will consider the three conditions whenever withdrawing laws in the future.

The three conditions are:

European Environmental Bureau (EEB) policy director Pieter de Pous said, “This is a clear warning to the Commission. It should trigger a very, very thorough rethink of how it approaches the withdrawal of legislation.”

That in turn would slow down the Commission’s better regulation push, especially when it came to withdrawing laws, he said.

The EEB does not believe that there was sufficient reasoning given for the withdrawal of the package. It has used EU transparency rules to apply for documents related to the decision to scrutinise the executive’s thinking.

“It seems clear to me that the decision to withdraw any legislative proposal can be challenged before the ECJ,” said Professor Nicolas de Sadeleer, holder of the Jean Monnet Chair at the Université Saint-Louis, in Brussels.

Steve Peers is professor of EU law at the University of Essex. He said the ECJ accepted that the Commission’s power to make proposals gave it the right to withdraw them.

But, he said, the right of initiative did not constitute a right of veto over the legislative process, and the judgement meant that the Commission’s decision to withdraw proposals was open to legal challenge from the institutions.

The simple reason there is a new Commission was not, in light of the judgement, a sound enough reason to justify withdrawing the Circular Economy rules, he added.

They could have been redrafted by both Council and Parliament during the legislative process, and there was still time to bring an annulment action against the withdrawal, Peers said in an analysis on his blog.

“Litigation, or the fear of it, could possible prevent the Commission from withdrawing proposals that it would like to withdraw,” he said.

But the push to cut red tape was not entirely dependent on the withdrawal of proposals, Peers added.

In December, Timmermans set a six month deadline for blocked legislation to extend fully paid maternity leave to 18 weeks to be passed. If it wasn’t, it would be ditched, he said.

That threat could lead to the Commission being sued by the Parliament for doing little to broker a compromise between the institutions, Peers said.

“If the EU institutions and member states make frequent use of the possibilities opened up by today’s judgment, this judicial intervention into the legislative process raises many such important questions,” he added.

The European Parliament is unlikely to sue the Commission over the withdrawal of the Circular Economy package at this stage. But Gerben-Jan Gerbrandy, the lead Liberal MEP on the bill, said he would consult the Parliament’s legal services, after EURACTIV contacted him last night.

If the lawyers said there was a case, said Gerbrandy, it only showed how the “Commission had acted as bullies” over the axing of the laws.

“I am willing to use this politically to criticise the Commission,” the Dutch MEP said, before explaining he would not push for a lawsuit so as not to further delay the environmental rules.

The Council is also unlikely to sue at this stage despite EU environment ministers being unanimous in their opposition to the package’s withdrawal.

The European Commission was asked for comment last night. It said, “We welcome the European Court of Justice’s judgement which confirms the Commission’s right of withdrawal.

“The Court also confirms that the right of withdrawal is an integral part of the Commission’s right of legislative initiative, to be exercised in order to promote the general interest of the Union.”

Ten member states in the Council of the EU had sued the Commission, after it withdrew a framework regulation for giving financial assistance to non-EU countries.

The Council and Parliament agreed that each decision to grant aid to a third country had to be subject to the ordinary legislative procedure.

The 2011 proposal would have given the Commission the power to decide which contries got aid.

The executive withdrew the proposal before the insitutions could adopt the amended legisalation, leading to the rare step of a the Council suing the executive.

European Commission spokesperson Mina Andreeva sent a statement to EURACTIV after the article was published. It made the distinction between the case on which the Court rules and the case of the Circular Economy package.

"These are two different situations. First of all, the judgment concerned the specific situation where the co-legislators had just found political agreement on a legislative proposal but in a way which deviated significantly from the Commission's proposal. In our view the proposal was therefore no longer fit to achieve the objectives it was meant to achieve. That is why the Commission - in that situation - decided to withdraw the proposal after having duly consulted the co-legislators on its position.

That situation is factually very different from that of the circular economy package mentioned in the Annex to the Commission's work programme, in which the Commission has announced to withdraw and replace it by a new, more ambitious proposal by end 2015 to promote circular economy. This latter situation was not even addressed by the Court's judgment of 14 April. It is therefore surprising how you can draw such conclusions from the judgement and apply them to an entirely different case – when in fact, again, the court actually confirmed the power of the Commission to withdraw proposals.

With regards to confirming the power of the Commission to withdraw proposals, here are the relevant paragraphs from the judgement:

Thirdly and last, with regards to the circular economy the three conditions which the Court sets out, and which it is suggested have limited the Commission's power, were all fully respected in the case of the Work Programme withdrawals:

He told MEPs in December 2014 that he would consult with the Council of Ministers and the Parliament before withdrawing and re-tabling the package.