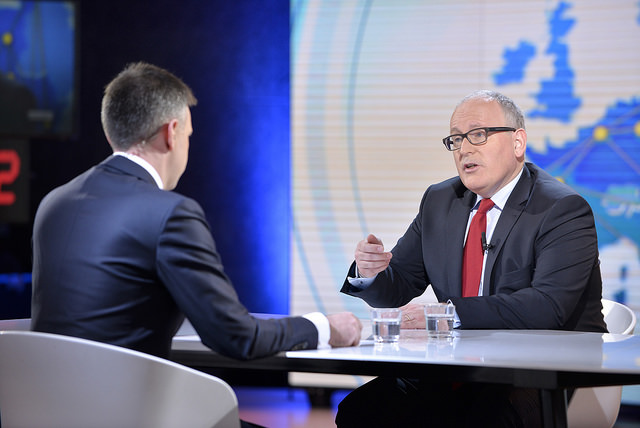 Timmermans has faced questions over the decision to ditch the Circular Economy package. [Euranet_plus/ Flickr]

Environmental campaigners have demanded the European Commission provide any analysis it has that justifies its decision to ditch the Circular Economy package of recycling, waste and landfill rules.

No such evidence has been given since Commission First Vice-President Frans Timmermans announced the laws would be axed in December, said four non-governmental organisations (NGOs) in a letter officially applying for the release of internal documents.

The letter to Timmermans, seen by EURACTIV, was sent yesterday (3 February) by the European Environmental Bureau, Friends of the Earth Europe, Surfrider Foundation Europe and Zero Waste Europe.

The NGOs are sceptical that any evidence exists. The package was on a hit list of laws that lobby organisation BusinessEurope wanted killed off by the executive, and critics are suspicious of the motivation behind its withdrawal.

Timmermans, in charge of “better regulation”, has said the executive will re-table a “more ambitious” proposal to replace the bill proposed by the outgoing Barroso Commission. Today (4 February), he will meet Green MEPs to discuss the decision.

Last month, sources confirmed the decision to ditch the bill, proposed by the outgoing Barroso Commission, would go ahead despite the objections of the EU Parliament and national environment ministers.

Jeremy Wates, the European Environmental Bureau’s secretary-general, said: “It is deeply troubling that the Commission seems intent on withdrawing the waste package against the will of EU ministers and a majority of MEPs.

“Adding insult to injury, it has provided neither the evidence nor the rationale for dismissing the waste package. It must do so before any decision is taken.”

“European citizens and taxpayers deserve to know why a proposal which would have created 180,000 jobs, helped protect the environment and put Europe on the path to a sustainable economy is being thrown out the window,” he added.

The application for any papers, reports, email correspondence, meeting minutes or “data exchange”  was made under the EU’s Access to Documents regulation, which sets a 30 day deadline for a response.

The letter also cited transparency obligations under the Aarhus Convention and its corresponding EU regulation as justification for the documents’ release.

The Convention, an international pact which the EU has signed, has robust transparency requirements for documents that relate to the environment.

In January, the EU’s highest court quashed a lower General Court decision, which would have allowed NGOs to force a review of EU institutions’ decisions in a number of environmental cases. The NGOs had invoked the Aarhus Convention.

EURACTIV exclusively revealed yesterday how campaigners cited the Convention in a complaint to the EU Ombudsman over the Commission’s refusal to release documents related to the EU-US trade talks over the Transatlantic Trade and Investment Partnership (TTIP).

Commission spokesman Daniel Rosario said the executive treated each request for documents on a case by case basis and in accordance with EU law.

“Each time we […] check if these documents can be released and under what conditions. In certain exceptional cases we don’t release the documents, but this has to be justified. There is a limited number of exceptions defined by the regulation [on access to documents],” he told EURACTIV.