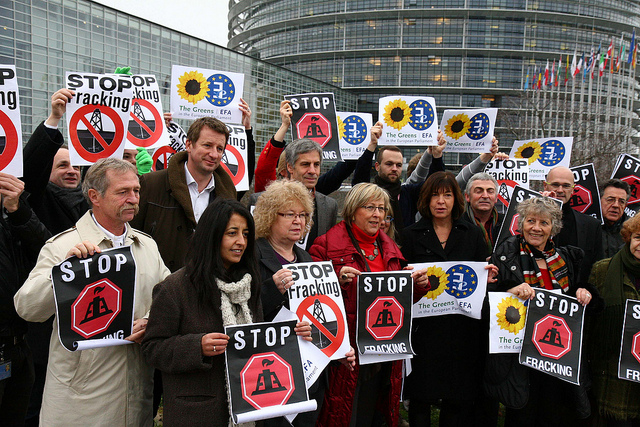 Although there are no scientific grounds to ban fracking, shale gas will do little to solve Europe’s energy supply security problems, according to a new report by the European Academies Science Advisory Council (EASAC).

Best practices have “greatly reduced the environmental footprint of shale gas fracturing,” the EASAC said, claiming that risks can be appropriately managed.

These include the replacement of potentially harmful chemicals and the full disclosure of all the additives used in the hydraulic fracturing – or fracking – process, notes the report published on Thursday (13 November).

Moreover, regulatory systems are already in place in most countries to minimise the impact on health, safety and the environment, the report said.

“In Germany, for example, no hydraulic fracturing is allowed without prior proof of the technical integrity of the well,” the EASAC notes, saying existing rules are sufficient to take care of safety issues.

EASAC is formed by the national science academies of the 28 EU member states, which gives the report considerable authority.

However, the potential for shale gas extraction in the EU is “uncertain” because of limited geological data on the accessibility of gas, the report adds, dampening hopes that shale can one day be exploited on a significant scale on the continent.

The largest reserves are located in Poland and France, with 4.19 and 3.88 trillion cubic metres respectively, according to the US Energy Information Administration (EIA). This compares with the USA’s 16tcm.

But the European geology is “more complicated” than in the US, with rock formations “older” and “more fractured” which has “implications for technical and economic viability of gas extraction,” the report adds.

This means “only a fraction” of the reserves are considered economically recoverable in Poland, while the supposed presence of gas in the Paris basin was shown “not to exist” in the latest geological studies.

Moreover, the EASAC report is sceptical about claims that shale gas can help mitigate global warming, saying this depends on the quality of the extraction process and “well integrity”.

Shale gas does offer an attractive alternative to Russian gas imports in the current tense geopolitical context, the EASAC notes however, saying it could make “a valuable contribution to energy security” by allowing some degree of “import substitution”.

“Technically, horizontal wells with a reach of up to 12 km are possible (although such wells would at present be uneconomic), but even with clusters of only 3km radius, it becomes viable to produce unconventional gas in heavily populated areas. This is a key contribution to reducing impacts in Europe,” the EASAC report says.

This reduction in land use burden also reduces the challenges of land reclamation after use and associated post-closure financial liability, it notes.

Public acceptance and transparency is key

But any large-scale drilling operation will require broad public acceptance and trust, the report says, which makes community involvement and openness “critical”, especially when it comes to the monitoring of potentially adverse effects on the environment.

This includes transparency about the “additives used” in the fracking process and “the results of monitoring to detect any water contamination or leakages of gas before, during and after shale gas operations” which should be transmitted to regulators and made accessible to the “affected communities,” the EASAC says.

Shale Gas Europe, an industry group, praised the EASAC report for providing an "independent, balanced and evidence based analysis of the potential of shale gas development in Europe".

In a statement, it said the EASAC report highlighted three main points. "Firstly, with effective regulation, recent technological advancements and well management ensures that natural gas from shale can be extracted without impacting the environment, water resources and local communities. Secondly, shale gas development brings with it environmental benefits such as a reduction in GHG emissions. Lastly the report states that there is still some uncertainty about the scale of shale gas resources in Europe."

Marcus Pepperell, spokesperson for Shale Gas Europe, added: "No one single energy source will ever fulfill Europe’s energy needs. We need diversity from both domestic and foreign markets to safeguard an affordable energy supply. With over 13 trillion cubic metres of estimated resources in Europe, shale gas could make an important contribution but we need much more exploration before we will we be able to define how much can be commercially extracted.”

Antoine Simon, shale gas campaigner at Friends of the Earth Europe, an environmental NGO, commented: "EASAC’s findings are contradictory and idealistic. They presuppose 'effective regulation' when in reality regulation is patchy and inadequate, and assume the fracking industry adheres to best practice that in reality it is all too eager to disregard. The statement ignores legal analysis by the European Commission which consistently concludes that the current legal framework does not adequately address the specific, cumulative, and destructive impacts of the fracking industry. Authorities also do not have the capacity to monitor this kind of large-scale development."

"Fracking is incontrovertibly dangerous for our environment, health and climate – that is why the public is right to be concerned and why it should be banned," Simon said.

Shale gas is an "unconventional" fossil fuel that is found within natural fissures and fractures underground. Until recently, no method of safely transporting it to the surface existed.

It is mined via hydraulic fracturing, or "fracking", the process of breaking apart layers of shale by pumping liquids and a number of chemical additives under high pressure, releasing trapped gas reserves.

To its supporters, shale gas represents an untapped and welcome alternative energy source to traditional fossil fuels. At the moment the EU depends to a great extent on gas imported from Russia, while disputes between that country and Ukraine have disrupted winter supplies in recent years.