Bedevilled by technical delays, labyrinthine decision-making and cost estimates that have soared from five to around fifteen billion euros, the International Thermonuclear Experimental Reactor (ITER) project is saddled with a reputation as a money pit.

Launched in 2006 after years of wrangling, it may be another four years before ITER carries out its first experiment. But, insists its new boss, a page has been turned.

“There has been a learning process,” said Bernard Bigot, 65, a scientist and long-term chief of France’s Atomic Energy Commission (CEA) who was named ITER’s director general in March, replacing Japanese physicist Osamu Motojima.

“Today, there’s a real awareness among all the partners that this project has to have a dimension of strong management to it.”

ITER’s job is to build a testbed to see if fusion, so far achieved in a handful of labs at great cost, is a realistic power source for the energy-hungry 21st century. Fusion entails forcing together the nuclei of light atomic elements in a super-heated plasma, held by powerful magnetic forces in a doughnut-shaped chamber called a tokamak, so that they make heavier elements, and release energy.

The principle behind it is the opposite of nuclear fission — the atom-splitting process behind nuclear bombs and power stations, which carries the risk of costly accidents, theft of radioactive material and dealing with dangerous long-term waste.

Buildings are now emerging from the dry, yellowish soil near Aix-en-Provence, in the Mediterranean hinterland of southern France.

“The tokamak building is scheduled to be finished in 2018 and all 39 buildings by 2022,” Laurent Schmieder, in charge of civil engineering, told journalists during a press tour of the site.

The tokamak — a word derived from Russian — by itself is an extraordinary undertaking: a 23,000-tonne lab, three times heavier than the Eiffel Tower. “This is a project of unprecedented complexity… a real challenge,” said Mario Merola, in charge of ITER’s internal components division.

Part of ITER’s problems lie in a diffuse managerial structure and decision-making among its partners: the 28-nation European Union, which has a 45-percent stake, the United States, Russia, Japan, China, India, South Korea and Switzerland. The partners are providing their contributions mostly in kind, which has been a cause of messy, protracted debate about who should provide what, when and how. It has been further complicated by the role of national agencies, which in turn deal with their own suppliers.

In some cases, said Bigot, discussions have dragged on for six whole years without resolution. He said that he told ITER’s board he would only take the top job if everyone agreed there was a need for change. “A CEO has to have the power to make a decision and to have it applied,” he added.

Bigot has named his first priority as getting a fix on where the project stands overall.

By November, there will be a new progress report, with the likelihood of a further increase in the price tag. The project has no reserve fund to deal with the unexpected — something that Bigot hopes to change.

In 2010, ITER abandoned its goal of obtaining the first plasma in 2018 and set a new date for a year later, but Bigot said that this deadline “clearly isn’t feasible”. So far, around seven billion euros have been contractually committed to the thousand or so companies working on the scheme. Every year of delay adds 200 million euros to the bill. “There have been difficulties, but we still have total faith in nuclear fusion as being worthy of the investment,” said Bigot.

“But clearly if we can’t manage this project correctly, if undertakings are not kept… (the project) could be in danger.” 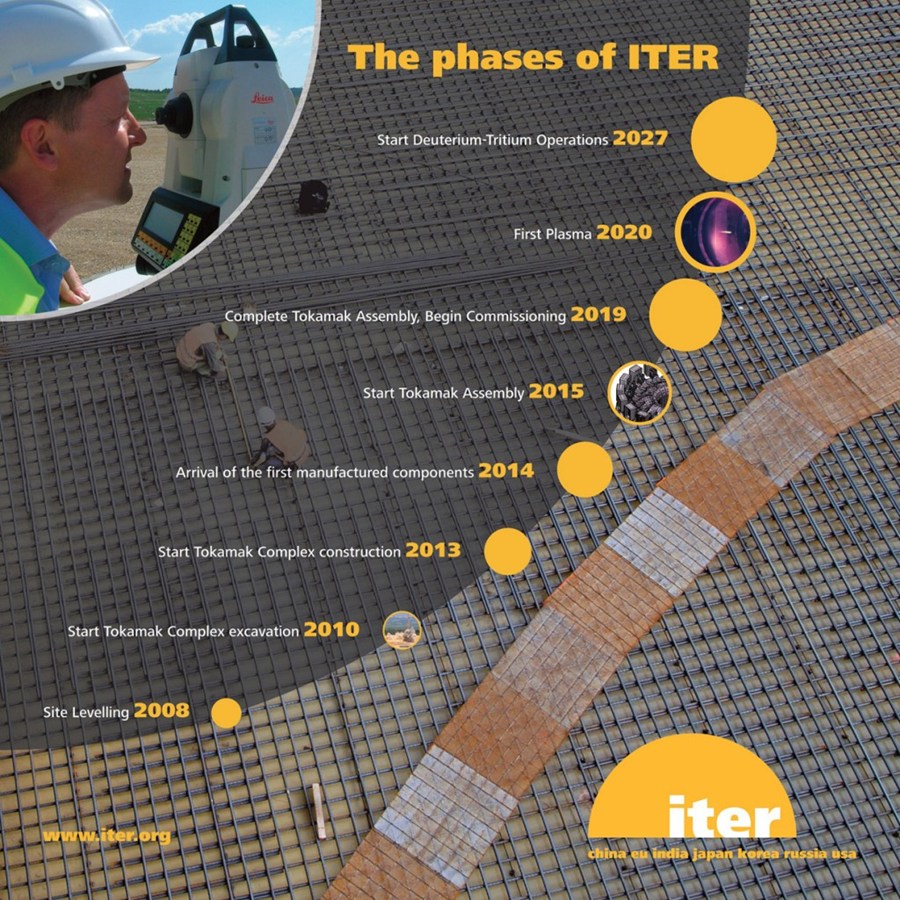 The ITER project is an experimental thermonuclear reactor based in Cadarache in southern France. The ITER reactor aims to replicate the kind of fusion that occurs in the sun as an abundant source of energy. The French site saw off rival bids from Japan, Spain and Canada.

Fusion research is touted by its proponents as a potential source of cheap, abundant and carbon-free fuel. However, sceptics say fusion has been a pipedream for decades and there remains scant evidence that it will yield practical results. There are also question marks over safety, according to environmentalists, who want the funding diverted to renewable energy research.

The initiative began as a US-Russian project in the 1980s, but now includes the EU, China, India, Japan and South Korea. 45% of the funding for the project comes from Europe, with a sizeable contribution from France. The remainder of the money is contributed by the other members. In 2001, total construction costs were estimated at around €5.9 billion and building was expected to be completed over a ten-year period. However, this has almost tripled to €16 billion, with critics claiming that the final bill could be even higher.