The AR-15 assault rifle, prominently used in past mass shootings, has become somewhat of a symbol in the Commission's quest to ban certain weapon types and limit the availability of others. [Dick Clark/ Flickr]

The supporters and opponents of the EU’s weapons law reform are seemingly entrenched in irreconcilable positions. After more than a year of negotiations and talks this week, there is still no agreement on the horizon. EURACTIV Germany reports.

EU officials negotiated through Monday night into Tuesday morning to no avail. The trialogue between the European Parliament, European Commission, and Council was meant to put to bed more than 12 months of dispute over the new Firearms Directive.

The executive insists that there has been “progress on some points” though. But it still seems incredibly unlikely that the two opposing points of view will find a compromise.

In the wake of the 2015 Paris attacks, the Commission presented a draft reform of the existing weapons legislation. The reform proposed outlawing semi-automatic weapons completely, uniform standards on deactivated military-grade guns and banning collectors from buying weapons of war.

The European Commission wants to make purchasing firearms in the EU more difficult and has cited the Paris attacks as the main contributing factor. However, Parliament has voiced its concerns about how effective its proposal will be. EURACTIV Germany reports.

The Parliament called the proposal over-ambitious and not fully developed, calling into question how the new deactivation standards could be implemented.

Currently, the directive has mostly been tinkered with by the Parliament’s budget committee and the Commission’s proposals have been watered down in several areas, especially where MEPs have seen potential risks to the interests of sportsmen and hunters.

Although the two camps have compromised slightly, there still remain some fundamental differences. The first revolves around whether weapons collectors and museums should be allowed to have military-grade weapons.

Europe’s legislature says yes, under certain conditions. The Commission says no, only when they are completely deactivated. The Council says it should be a question of national responsibility.

The second bone of contention is whether civilians should have the right to own semi-automatic weapons.

In the early hours of Tuesday morning, the European Commission made a breakthrough on the issue and converted fully-automatic weapons will be classified as Category A firearms, and will, therefore, be completely prohibited.

The second change requested by the Commission applies to semi-automatic weapons that “resemble” fully-automatic military-grade guns. It’s a point that has garnered a lot of criticism because it was unclear where and when the two types start to overlap.

The executive argues that civilian versions of fully-automatic military-grade equipment, like the AR-15 and Kalashnikov rifles, are among the “most dangerous weapons”. They were designed for military use and have in the past been used in terrorist attacks and mass shootings, like the Orlando shootings in June. To that end, the executive wants the maximum magazine size for semi-automatics to be capped at ten.

Many MEPs have resisted this change. According to shadow rapporteur Dina Charanzová, prohibiting certain semi-automatic weapons would not contribute anything to public security. The ALDE politician told euractiv.de that the Juncker Commission would only be targeting legal gun owners and sports enthusiasts, under the guise of going after the illegal arms trade.

Finland Perussuomalaiset MEP Jussi Halla-Aho (ECR) said: “terrorists and criminals don’t use legal firearms”. Moreover, he added that limiting the size of magazines to just ten shots would be practically unenforceable, because weapons like the AR-15 take different magazine sizes, many of which have been in the hands of gun owners for many years.

The Commission called on the Parliament to get out of its blockade mentality. Negotiators told EURACTIV that the Parliament’s representatives were not even prepared to insert a “recital” into the directive, which would have just warned about the dangers of certain semi-automatic weapons, free of political language.

Recitals in EU law are not legally binding but may come into force when referred to in a court case.

European Commission sources told EURACTIV that the legislature has been “heavily influenced by the gun and shooting lobbies” and the executive has complained about the “aggressive tone” of its opponents.

Its representatives have even received a number of angry and abusive emails, including one which was sent to Commission envoy Alain Alexis, depicting him as Adolf Hitler. Members of the pro-gun organisation Firearms United have attended every parliamentary hearing in person and have loudly made their presence felt.

Firearms United has defended itself against accusations of any wrongdoing. They admitted to calling on their members to send emails to EU politicians but insisted that they were not responsible for the content of what may have been sent.

The organisation’s Katja Triebel told EURACTIV that “only the European Parliament is listening to us”. 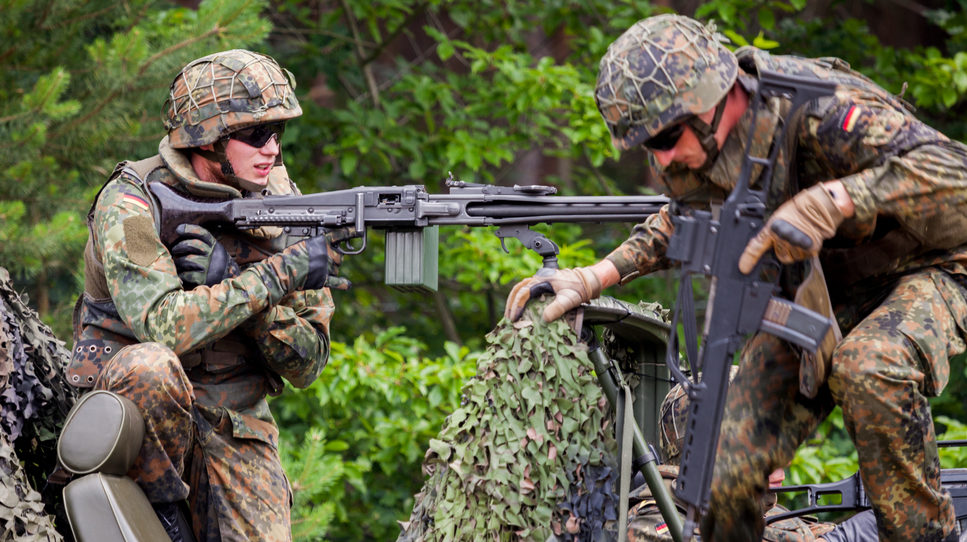 The British lawmaker first pushed for a watered-down reform back in July. Ford argued that the interests of marksmen and hunters should not be swept under the rug. In November, she attended a Firearms United conference in London, next to Charanzová, Halla-Allo and other MEPs.

One parliamentarian that was at the trialogue told EURACTIV that Ford is under the influence of “British lobby groups”. The MEP also added that other groups in the Parliament, like the conservative EPP group, are also strongly guided by lobbyists. Allegedly, the position of the Eurosceptic EFD group has been “directly lifted from a lobby paper”.

An internal “list of interest groups”, seen by EURACTIV, lists other influence groups that were asked to give Parliament their “feedback” on the directive. The Federation of European Societies of Arms Collectors, the British Shooting Sports Council and the Swiss Mission in Brussels are all listed.

Firearms United’s Triebel denies that Brussels has been overly influenced by them or that major weapons producers got involved through championing the interests of shooting enthusiasts.

The British organisation is, therefore, reliant on the support of small and medium-sized companies contributing donations of around €1,000.

How much influence lobby groups exert can therefore only be imagined. But it is telling how openly both the Parliament and Commission are complaining about the influence of the lobbyists.

It seems that the trialogue has only served to entrench the positions of the two camps in this particular dispute. The ball now lies in the Parliament and Council’s court; the Commission insisted that it has now made its position “crystal clear”.

The executive hoped that a decision could be forthcoming in the “coming days”, but warned that “we cannot compromise on the security of our citizens”.