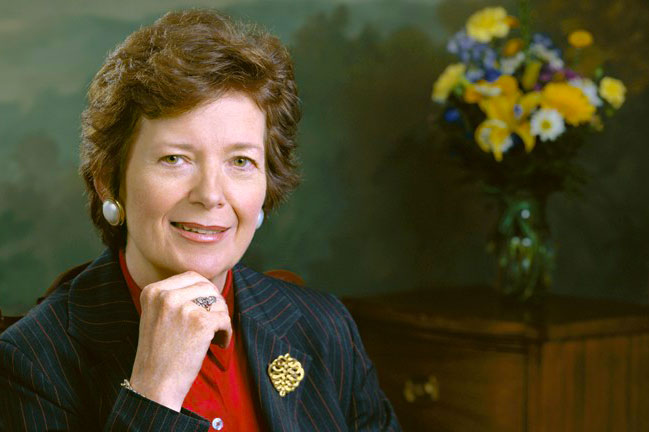 This year we’re celebrating the hundredth anniversary of International Women’s Day. Have me made it?

A centenary is a time to think back as well as plan forward.  In 1993, I was honoured to pay a special visit to New Zealand on the occasion of that country celebrating being the first country in the world to give the parliamentary vote to women in 1893.

While I am proud to say that the key figure in initiating the legislation was an Irishman, John Ballance from Ulster, the real power came from the women of New Zealand who had cycled for hundreds of miles along the mountainous roads of the two islands, collecting signatures for the campaign. Interestingly they saw the campaign as part of their struggle to curb the drinking habits of their menfolk.

We are each familiar with the struggles for voting rights for women in our different European countries at the beginning of the twentieth century, and later the struggle for the right to stand for parliament.

In some parts of the world these struggles are more recent, and ongoing. Women in Kuwait did not become enfranchised until 2005, and women in the Arab region continue to struggle to stand for parliament and for cabinet posts.

This may change, more rapidly, as it is notable how many women – particularly young women – have been coming on to the streets in Arab countries despite the violence against them, demanding greater freedom, participation and respect for their human rights.

What role are women playing in the North African revolutions at the moment?

This popular movement, which is different in each country, could have a transformative impact if women are enabled to participate fully and equally in new constitutional and legal structures in Tunisia, Egypt, Bahrain, Libya and perhaps others.

Women’s empowerment is in fact a cornerstone of democratic growth in the Arab world. This is because when women are able to participate in parliament they raise issues that others overlook. Once there is a critical mass of women members, they change the priorities, devote energies to projects that others neglected, reach out to constituencies that have been marginalised and ignored.

Women’s involvement in government makes them more representative, responsive and accountable, and better able to reach across ethnic, racial and religious lines. And we must not confuse the terms ‘Arab’ and ‘Islam’.

Do you think Europe is doing enough to support this movement towards democracy?

The European Union should do all it can to support the peaceful transition to democracy. It is in the interests of all to do so.

Unfortunately, as I noted at a conference in Paris last week on the issue of ‘Women against Fundamentalism and for Equality’: “There is a notable trend in European countries towards Islamophobia, some of it exploited for political short term gains. So we need to have open discussion on fundamentalism such as this, particularly about the impact on women.”

We must have no ‘Islamic feminists’, just as we don’t have ‘Jewish feminists’ or ‘Christian feminists’ – but we must be respectful of each other’s cultural background and heritage.

What about women’s political empowerment in EU countries?

Of course, there has been steady progress over the decades in equal treatment legislation, with landmark cases of the European Court of Justice and national courts, and initiatives by the European Parliament itself.

The report comes up with 26 points, of which the first 14 relate to issues of female employment and equality in pay and conditions.

Point 15, however, is rather weak: ‘Welcomes efforts made at European level to increase women’s representation in politics; advocates, therefore, greater participation for women in all European institutions, particularly in positions of responsibility; stresses, however, that further efforts must be made at national, regional and municipal level.’

The report notes that “only 3% of major companies are chaired by a woman,” and calls on member states and the Commission to pay particular attention to vulnerable groups of women – it refers in particular to women with disabilities and Roma women.

Reading the report, I was struck by the fact that all the right buttons were being pressed, but that it had the air of a button-pressing exercise! It was adopted by 22 votes in favour and two against, and which I understand will be put to a plenary vote next week.

Are you saying we are lacking ambition?

Let me summarise the value of women’s representation by quoting a passage from a recent report of National Democratic Institute (NDI) on Democracy and the Challenges of Change. A guide to increasing women’s political participation. The report draws on case studies around the world, and long experience in training women for democracy, and puts the case in this way:

In order to meet worldwide development goals and build strong, sustainable democracies, women must be encouraged, empowered and supported in becoming strong, political and community leaders.”

This being the case, why is women’s participation at political level in Europe faltering?

While 10 countries in the EU have over 27% proportion of women in the lower house of parliament, led by Sweden at 45%, the majority – including my own country – are below 23% and two countries are down to less than 10% of women members.

Clearly the traditional barriers remain strong enough to deter or defeat women candidates: lack of adequate financial resources, disproportionate family obligations, lack of confidence in a predominantly male culture, a preference of many women to serve in civil society organisations where the culture is more friendly and gender sensitive.

The media coverage of decisions in the recent past by Licia Ronzulli and Rachida Dati, members of this Parliament, show clearly the very real obstacles faced by many women in managing family and political life.

Are we in Europe prepared to really tackle these and other barriers over a ten-year transformative period? Are countries prepared to introduce national quotas for local and parliamentary elections for a decade to correct the existing imbalance? Are the EU and national governments prepared to provide financial resources to train and resource women candidates at local, national and EU level? Are national parliaments willing to adapt their procedures to enable women members to have a better worklife balance? Are women themselves prepared to accept the responsibility of giving leadership and coming forward with a vision of how the European Union can close the current democratic deficit gap?

These are some of the questions the marking of a centenary prompts us to consider. The wider political, economic, social and climate change challenges facing Europe require the injection of new vitality and leadership.

While we must be optimistic we must also be realistic. In 2008 the UK’s Equality Human Rights Commission published the report ‘Sex and Power’ and inter alia stated that: “A snail could crawl the entire length of the Great Wall of China in 212 years, just slightly longer than the 200 years it will take for women to be equally represented in Parliament.”

We don’t need slow incremental or snail’s pace change, we need transformative change if we are going to address these problems effectively.