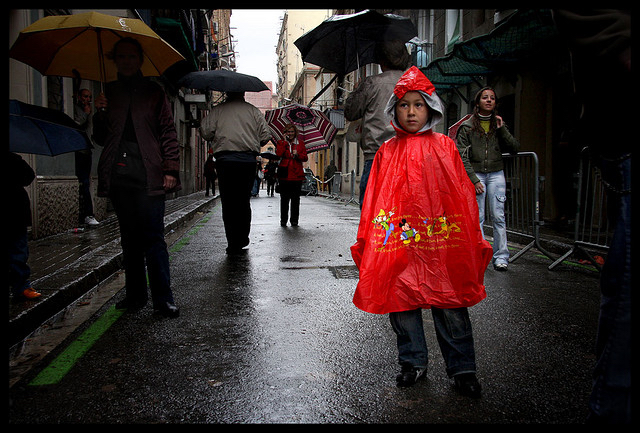 While the country has emerged from recession and become one of the fastest-growing economies in Europe, more than one in three children – or 2.6 million – are at risk of poverty or social exclusion, according to latest EU figures.

High levels of long-term unemployment coupled with spending cuts to healthcare and education have pushed more families and young children below the breadline even as the economy picks up.

Inequality is set to be a key issue in a December election where the ruling centre-right People’s Party is running a campaign focusing on how Spain pulled back from the brink of an international bail-out to become the eurozone poster child for careful debt management through austerity measures.

The opposition Socialists and leftist newcomer Podemos however have seized on growing rates of poverty as a sign that the economic rebound has failed to reach many households.

In the southern region of Murcia, which has one of the highest poverty rates in Spain, divorced mother Victoria Belmonte has spent years looking for work from factories to supermarkets.

Since her state benefit dried up in June, the 42-year-old former beautician has relied on charity handouts and her own mother’s pension to feed and clothe her four children.

“My income at the moment is zero euros,” she said in a church-owned building in Puente Tocinos, a working-class suburb of the city of Murcia, where volunteers were helping children with their homework.

“The most difficult part is the children because they want to do things, but they can’t,” she added. “I’m trying to live day-to-day but I worry about the future. What will happen for example if one of my kids wants to go to university?”

The growing number of impoverished children heaps more pressure on a social security system struggling with one of the fastest-ageing populations in the world.

Children trapped in poverty and denied opportunities could end up on benefits instead of turning into the tax-paying workers that the system desperately needs, say campaigners and economists.

“They will be adults stunted in reaching their potential. They will probably be adults dependent on social security,” said Andres Conde, head of Save the Children in Spain.

The proportion of children under 16 classed as at risk of poverty or social exclusion in Spain reached 35.4% last year, the highest in the eurozone bar Greece where riots and strikes against austerity measures in recent days have revived memories of the height of the eurozone debt crisis.

The figure, which is 10 percentage points above the eurozone average, has risen sharply from 31.9% in 2013, when the economy emerged from over five years of downturn.

The EU indicator, known as AROPE, is calculated taking into account factors such as relative household income compared with the national average and the ability to afford basic items like adequate heating or a washing machine.

A key cause of child poverty is the high number of people jobless for more than two years – which stands at nine times the level seen in 2008 in a country where the job seekers’ welfare benefit ends after around 18 months.

“The loss of work and reduction of wages is concentrated among adults living with children. Therefore children run a greater chance of being poor than other sectors of the population,” said Salvador Perez-Moreno, professor at the applied economics department of the University of Malaga.

Spain’s unemployment rate has fallen to around 21% from 26% since the recession ended in 2013, but the proportion of jobless who have been unemployed for two years or more has jumped by about 10 percentage points.

Murcia, known for its golf resorts, was gripped by construction fever during the boom years and the 2008 property crash left many without work or qualifications, said Victor Martinez, the regional People’s Party spokesman.

“The recovery is real, our country is coming out of crisis,” he told Reuters. “But that recovery is taking a long time to reach individuals and firms.”

Belmonte’s ex-husband, for example, was a plumber before the recession, earning enough to support her as a stay-at-home mother to their children now aged 6 to 16. But his business went bust and he now has no income.

>>Read: Poverty in Europe is getting worse, not better

Although unemployment is falling, much of the work available is of low quality, with poor wages and limited hours meaning even those in employment struggle to make ends meet.

The salaries of Spain’s lowest earners has declined over the past seven years. The number of people living in households where adults worked for less than a fifth of normal working hours over the past year has more than doubled in Spain since the start of the downturn – the biggest leap in the EU.

In Puente Tocinos, Catholic charity Caritas has set up one of many programmes around the country supporting children with academic and psychological help in the hope of improving their chances in life.

Around 35 children aged six to 12 gathered around tables to finish their homework before taking a snack of a tuna roll and fruit juice into the square outside for a break.

Priest Jose Antonio Cano, who oversees the programme, said most were children from ordinary families that had been hit hard by the recession.

“We realised that if we didn’t help them with their education, the cycle would just repeat itself.”

According to a report by Caritas-Spain, 14% of the workers in the Iberian country are “poor” (with incomes of less than 7,700 euros per year). Sebastian Mora, Caritas's secretary-general in Spain, said: “there is still a high percentage of people excluded and impoverished”. Mora added that 53% of Spanish people assisted by Caritas in the country are couples with children, saying “We see huge poverty in the families we help”.

According to a recent study by the OECD, there is a clear increase in inequalities in Spain, as household income dropped an average annual 3.5% between 2007 and 2011. Nearly 13 million people are at risk of poverty or social exclusion in Spain (27.3% of the population), according to a report by the European Anti-Poverty Network (EAPN).