The government will lift the cap on maternity allowances, Prime Minister Andrej Plenković has confirmed. [Shutterstock]

The Maternity Leave Directive could be the next victim of the Commission’s “Better Regulation” axe-man Frans Timmermans. The proposal will be cut at the end of May if negotiations fail to progress.

In 2008, the Commission proposed a Maternity Leave Directive that would increase the compulsory maternity leave period in the EU from 14 to 18 weeks. But in its first reading in the European Parliament, MEPs voted to extend the period to 20 weeks at full pay, and the text has been stuck in the Council ever since.

Losing patience with this blockage, the new European Commission issued an ultimatum in December 2014: the text would be scrapped if no progress was made within six months.

>> Read: Draft EU law on maternity leave to be scrapped as ‘red tape’

During his presentation of the European Commission’s 2015 work programme, Vice-President Frans Timmermans told the European Parliament he was “prepared to make one last effort to get this proposal adopted, but if there is no progress within six months we will abandon it”.

If no consensus can be reached, Jean-Claude Juncker’s right-hand man said he would come up with “a new proposal to try and release the institutional deadlock”.

The June deadline is fast approaching, and the negotiations are still deadlocked. “Two weeks ago, the EU’s Latvian presidency made it known that they had no mandate to begin new discussions on the maternity leave directive,” a European source told EURACTIV. “The ball is now in the Commission’s court”.

Intense lobbying from the Parliament

Members of parliament are still fighting for the directive, despite the position of the European executive. On 6 May, the European Parliament Committee on Women’s Rights and Gender Equality adopted a non-binding resolution calling on the Commission and member states to resume the negotiation process.

The resolution passed by 19 votes to 3, with 11 abstentions. In the hope that any revived negotiations would take a similar line to the 2008 directive, the MEPs asked for work on “an immediate alternative to be started under the Luxembourg presidency of the Council of the European Union”, which succeeds the Latvian Presidency at the end of June.

Malin Björk, a radical left Swedish MEP, said “this threat to get rid of the Maternity Leave Directive is serious because it contradicts the European Union’s so-called commitment to gender equality and effective work-life balance for women and men in Europe”. She added that “it will also create a dangerous precedent for the “better regulation” agenda (REFIT), which is sacrificing social standards in the name of administrative burdens”.

A Commission spokesperson told EURACTIV that “the Commission is prepared to withdraw the proposal if the Parliament and the Council fail to reach an agreement, and will propose an alternative that will fulfil the directive’s objectives”.

Disagreement on many fronts

Many points of the maternity leave directive have caused friction between the Parliament and the Council, beyond the simple question of duration. The Commission’s task of steering a new compromise through this ideological gulf will not be an easy one.

The Commission’s initial proposal that each member state should base minimum maternity leave payments on its own sick-leave compensation scheme was slammed by members of the European Parliament, who voted for full pay over the whole 20 week period.

Maternity leave in the European Union 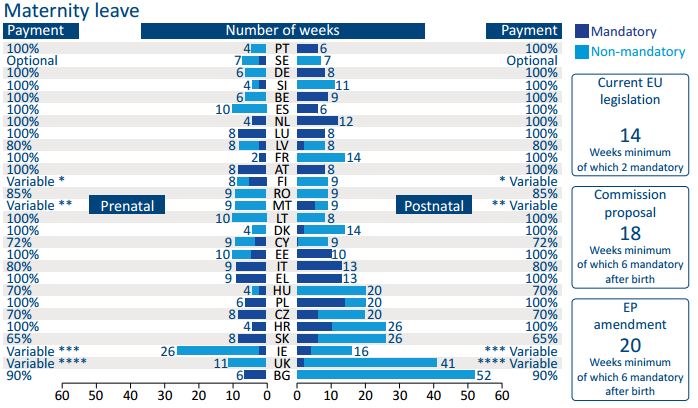 "The European Women’s Lobby notes with concern the lack of legal basis regarding the previous decision of the Commission threatening to derail the entire process. If the European Commission decides to withdraw a draft law, members of the FEMM Committee will urge the Commission to come up with the new legislative initiative under the forthcoming Luxembourg presidency of the EU Council. This would not be satisfying, as we don’t want the proposal to fall again into a cycle of endless discussions. We keep calling the institutions to “deliver now!”, meaning that they should assume their responsibility regarding equality and health for European women. And not to forget, the draft Report of the EU strategy between women and men post-2015 has been adopted Wednesday by the FEMM Committee with a large majority."

The Commission said this bill would give women "more leeway to choose the time at which they take the non-compulsory part of their leave (before or after birth). They will no longer be obliged to take a specific part of their leave before the birth, which is currently the case in some member states".

In June 2009, a coalition of centre-right and liberal MEPs had rejected Estrela's plans in a June vote in Strasbourg