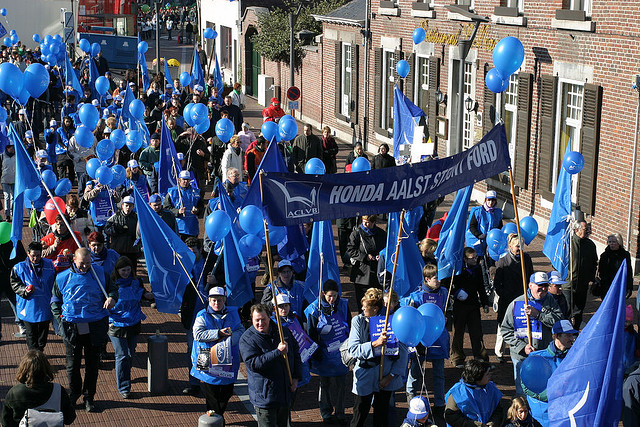 On 22 August, the European Commission proposed funding for redundant car workers in Belgium’s Ford factory to acquire new skills and find new jobs. Based in the Flemish city of Genk, the workers were told in October 2012 that they would be laid off in 2014.

Ford’s 479 redundant workers, and its suppliers in Belgium, are to receive €570,945 from the European Globalisation Adjustment Fund (EGF) to find new jobs. The decision comes after Belgium applied for EGF funding, following Ford’s announcement in October 2012 that it would close down its plant in Genk by 2014.

The Commission proposal now goes to the European Parliament and the EU Council, for approval.

“Car production in Europe has dropped considerably in the years of the Eurozone crisis, mainly due to falling demand,” said Employment Commissioner László Andor in a written statement. He stated that it was important to “show solidarity” with the workers in the motor industry, who are experiencing hardship in the conditions of a globalised economy.

The money from the Commission will be spent on retraining former Ford workers, on vocational guidance, and assistance with the job-searching, as well as other forms of assistance.

Rohnny Champagne, the head of the ABVV-Metaal Limburg trade union wrote in an email to EURACTIV that every Commission initiative to help unemployed Ford workers is welcomed but disagreed how the funds are distributed. He believes the financial allocation should be better shared among the redundant workers rather than given to an employment agency. “The only ones who will be better from all this, are the training facilitators and not our workers,” Champagne continued.

Ford employees are not the first in the automobile industry in Belgium to receive EGF funding. Belgium has already submitted seven applications to help redundant workers. These came from Opel Antwerp, as well as the Belgian steel and textile sectors.

Since the creation of the EGF, the European Commission has received 128 applications from different sectors, from more than 20 member countries. Automotive, machinery and equipment, and textile sectors have submitted the highest number of applications for the period 2007-2014. Spain, the Netherlands, and Italy are the top recipients of the EGF money, and on average the Fund disbursed almost €5,000 per person.

In the past few months, the Commission approved applications coming from Spanish carpentry, bar and restaurant workers, the Dutch construction sector, and from a bakery closure in Greece.

Despite the demand, the budget for the 2014-2020 period has been reduced from €500 million to €150 million. Some ten member states campaigned in 2012 to scrap the existence of the fund, but the Council reached a compromise to keep it with a lower budget.

Under the 2014-2020 new rules, the EGF can finance up to 60% of the cost of projects benefiting the self-employed, temporary and fixed-term workers whose activity ended. The scheme was also extended until the end of 2017 to include young people not in employment, education or training. Farmers were also proposed by the Commission to be included in the Fund’s provision, but the European Parliament rejected the initiative.

Operational since 2007, the Commission originally laid out the European Globalisation Adjustment Fund (EGF) to support workers made redundant due to structural changes in global trade patterns. Since 2009, the EGF scope was extended to cover workers affected by the economic crisis. Each member country is entitled to apply for co-funding to help the unemployed retrain and to find new jobs.

The Fund finances projects that last no longer than two years cover labour categories such as unemployed youth, self-employed, temporary or fixed-term workers. The Fund cannot be used to modernise, keep afloat or restructure a company.