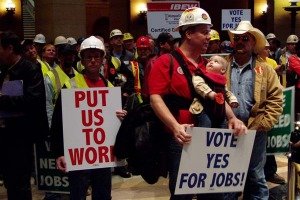 The United Kingdom, Germany, Finland and seven other net contributors to the EU budget have called to scrap a €500-million annual fund aimed at helping workers laid-off as a result of globalisation.

Some 10 EU countries, essentially a group of net budget contributors, oppose the extension of the European Globalisation Fund (EGF), set up in 2006 to assist laid-off workers develop new skills and return to the job market.

Among the countries blocking the fund's extension are the United Kingdom, Germany, Finland, Sweden, the Netherlands, Austria and Denmark, EURACTIV has learned.

The EGF is financed with up to €500 million each year.

Marian Harkin, an Irish liberal and a member of the European Parliament’s employment and social affairs committee, said the irony was that most of these countries had applied for EGF funding during the period 2007-2013.

MEPs on the employment and social affairs committee were expected to give their backing to an extension of the scheme until end 2013 in a vote scheduled Tuesday (6 November).

Most countries benefit from the fund, not the UK

An overview of applications for the fund showed that most beneficiaries actually originate from the countries blocking the proposal in the EU Council of Ministers. They include Manroland, a German printing machinery manufacturer, Danish wind turbine manufacturer Vestas, Swedish automaker Saab and Finland's mobile phone manufacturer Nokia Salo, which all applied for EGF funding.

The UK has never applied to the EGF, taking a somewhat consistent approach in its policy not to advocate increased EU spending. Harken told EURACTIV that rumour had it that the UK’s position on the EGF had “something to do” with its EU budgetary rebate.

Harkin expressed puzzlement over the position of these EU countries. When asked about the recent closures of Ford carmaker plants in Southampton, England, and Genk, Belgium, she said the EGF represented a “perfect fund” to help support those workers who were laid off.

But Harken said she was concerned about the future of the fund since, as many member states put the squeeze on EU budget negotiations, the EGF could be viewed as just another “low-hanging fruit”.

Sweden has also made its position clear that it does not believe that this type of aid for workers should be within the ‘competences’ of the EU.

During its EU presidency the Danish placed the EGF in a ‘negotiating toolbox’, with a view to scrapping it. The current Cypriot presidency has voiced its support for the programme, a position likely to be maintained by the upcoming Irish presidency of the European Council.

On Monday, the agriculture committee rejected the proposal, which received support from just two of the 38 voters. Harkin told EURACTIV this was “not expected”.

The proposal had attempted to buffer farmers from the effects of large multilateral trade deals, such as the recent free trade agreement with the Latin-American Mercosur group.

The no vote represents a further blow to the fund, which by August last year had provided 100,000 workers in various companies – from carmakers to those in the textile industry – with an average of €4,844 each. Figures for 2010 showed an employment reintegration rate of 42%.

“My fear is it will fall off the table”, Harkin said.

Luís Paulo Alves, the Portuguese MEP (Socialists & Democrats) who led the agriculture committee opinion on the proposal, told EURACTIV he was opposed extending the fund to cover farming activities.

"When attempting to treat farmers as independent workers, without taking into account the specific nature of their activities, we give them a very bad and difficult instrument to use, as can be seen through the use which has been made in recent years of the fund. From a total of 3.5 billion Euros available to support unemployment, and even in thecurrent framework of employment difficulties, it was only possible to use in all EU between 2007 and 2012, 443.3 million Euros, what clearly demonstrate the ineffectiveness of this tool, especially if applied to agriculture in terms of what is applied to the employment crisis of European workers."

"The establishment of commercial agreements involving agriculture is a matter of the utmost sensitivity and of utmost importance to farmers, and the worst service we can give them is to adopt a regulation that does not take into account the specific characteristics of their sector, becoming an useless and dangerous instrument totheir interests, where their presence can be invoked, but farmers can not find the answers they truly need."

Conceived in 2006, the Commission originally laid out the European Globalisation Fund as a support system for workers made redundant due to structural changes in world trade patterns caused by globalisation.

The reach of the funds was extended in 2008 to include workers laid off as a result of the financial crisis. As of December 2011, the crisis criteria were removed.

This time around, the Commission plans to include farmers left unemployed by “a new market situation resulting from the conclusion by the [European] Union of trade agreements affecting agricultural products”.

But the European Parliament’s agriculture committee opposes its application to farming, preferring to earmark direct funds in the Common Agricultural Framework.