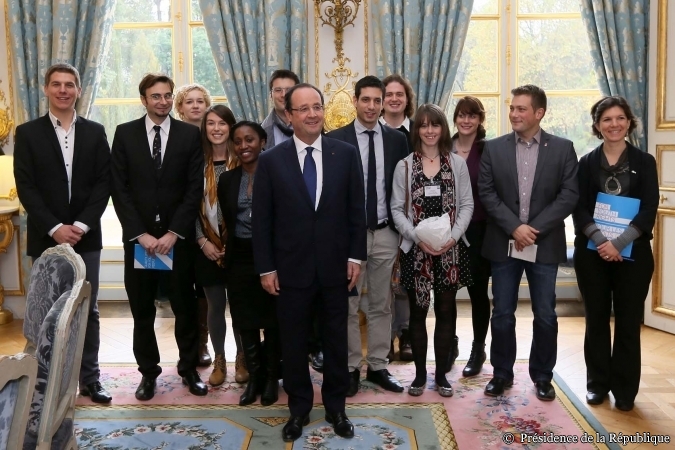 The second high level conference on youth employment, hosted by French President François Hollande, comes a few months after German Chancellor Angela Merkel held the first meeting, in July 2013. A third will take place in Rome next spring to draw the first conclusions of measures to tackle the problem.

24 out of 28 European leaders attended, along with employment ministers and different stakeholders, such as representatives of public employment services and training institutions and youth workers.

On 1 January, the EU will implement the Youth Guarantee, a scheme to get all young people in either work or education, meaning that all countries which have asked the European Commission for it will be able to get the necessary finances to help them put the scheme in place.

France has already presented the Commission with its implementation plan and should receive a €600 million payment.

“Without growth, there will be no jobs for young people. Politics doesn't create jobs, enterprises create jobs,” Merkel stressed, adding that it was a “national responsibility to fight youth unemployment”.

Hollande underscored the three priorities agreed with his European partners: develop training in the jobs of the future, professional inclusion of the most vulnerable groups and support for creating enterprises.

70% of the budget from the European Social Fund (ESF) will be dedicated to young people, making €7 billion available each year. The European Investment Bank (EIB) will allocate another €6 billion per year. For the first two years, a total of €45 billion will be invested into training and enterprise creation.

The Youth Employment Initiative is partly based on the French experience, which allows the most vulnerable young people who are neither in employment, education or training to have access to a minimum income of €434 per month, while simultaneously offering them training or an internship.

The experience has been conducted in 10 French departments. Eight French regions are eligible for the programme (a list of all eligible EU regions can be found here).

In France, 10,000 young people benefit from the new programme, a figure that the government hopes to double by 2016.

Despite the EU pledge to rush out its youth support funding, European leaders did not pledge additional money. Nor did they propose any new Europe-wide initiative to kick-start hiring youngsters who, according to EU Commission President José Manuel Barroso, risked becoming a "lost generation".

European Council President Herman Van Rompuy urged member states to pursue labour market reforms to spur hiring and said that he expected joblessness to diminish in the coming year. "The economic recovery is taking shape. ... We can hope that in 14 months' time from now all the countries in the eurozone will have seen a positive trend on jobs," he said.

Karima Delli, a Green MEP from France, called the conference a PR exercise. “Nothing concrete has been proposed. The Youth Employment Initiative’s aim was to offer each young person a job, training or an apprenticeship within four months after they left school. We don’t talk about the delay or the quality anymore. It’s an important step backwards! The announced €45 billion represent only 0.08% of the annual European GDP. Let me remind you that the cost of inaction on youth exclusion is €150 billion. This is simply a patch put over the serious crisis that young people face”.

Irish Taoiseach Enda Kenny said the summit was different because “there was a real focus on having the money available and having every country have its programme ready by the end of the year, and to start this effectively. For the first time, there was a real impetus because people are being challenged about the scale of youth unemployment.”

The new package includes the so-called "Youth guarantee", a tool that aims to ensure that all youth under 25 receive a quality job, internship or education offer within four months of finishing school or becoming unemployed.

Youth unemployment is on average twice higher than the rest of the working age population in Europe. In Italy, it has risen to some 35% and in Spain and Greece, it even reaches over 50%.

The Youth Employment Package builds on the endorsement by the European Council on 29 June 2012 of both the Youth Guarantees concept and the usefulness of a quality framework for internships.