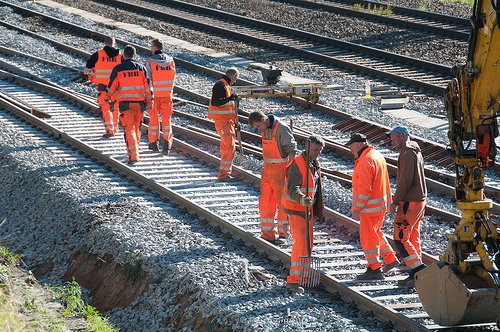 As the EU elections approach, France is pressing ahead to strengthen safeguards against the abuse of low-cost foreign workers within Europe, without waiting for the European institutions to hammer out the final text of the revised EU Posted Workers Directive.

France will not wait for EU institutions to adopt the final text of the revised posted workers directive before strengthening its own laws. The Socialist majority in the French parliament has presented a legislative text aimed at better framing the practice, which has long been denounced for abuses in sectors such as construction.

The 1996 posted workers directive allows companies to send their employees to work another EU state for a limited period of time, leading to accusation of social dumping. The directive is currently under revision but for the moment the posting of workers leads sometimes to social dumping.

Indeed, social contributions are paid in the worker's country of origin, not the host country, leading to a 30% labour cost difference between France and Poland.

To address this, the draft law foresees a number of measures to hold French companies accountable for their subcontractors, going further than the European legislation currently under revision.

The extended accountability would apply not only to the construction sector, as the revised EU directive currently foresees, but also to to other activities. Concretely, it will be up to French employers to make sure that posted workers among their sub-contractors are registered with the labour inspection administration.

The final employer will also be responsible for paying wages in case contractual obligations are not met. For example, if a union informs a company that its subcontractor does not respect the minimum wage obligation, it will be up to the French company to remedy it, by forcing its subcontractor to pay a decent wage to the posted workers and, eventually, by paying the bill itself.

Finally, the Socialists’ draft law proposes to put in place a “black list” of companies already condemned for illegal activities.

The Socialist proposal comes only weeks after a last-minute deal to revise the posted workers directive.

The agreement, struck between the EU's 28 labour ministers on 9 December, establishes an "open list" of measures that member states can introduce to keep posted workers under check and a mandatory solidarity and accountability mechanism in the building sector, which accounts for half of all posted workers in France.

“The deal was extremely difficult to reach and we owe it to Poland which accepted to make a European choice," said Thierry Repentin, the French minister-delegate for European affairs. "Given the Polish companies’ structure, Poland did not have a national interest” in doing so, Repentin explained, praising Warsaw's cooperation on the sensitive matter for Paris.

In 2011, 19% of posted workers in France were of Polish nationality, according to the labour ministry. By supporting a revision of the directive, Warsaw allowed Paris and Berlin to build a sufficient majority to get the deal done, despite opposition from the UK and other Eastern European countries.

“But the work is not over," Repentin told the French parliament, explaining that so-called trilogue talks between the EU Council, Commission and Parliament on the directive's actual revision began only recently, on 1 January.

“We set the end of February as a deadline to agree on the posted workers directive,” Repentin said.

“I wish the text that will be adopted is not too different from the compromise because balance is fragile and the countries that have accepted to take that step will not go further,” the French minister underlined.

However, the European compromise text does not go far enough, according to many French MPs.

“The bottom of the problem remains the same," said Jacques Mayard of the centre-right opposition UMP party. "Those companies [that hire posted workers] will continue to pay their social contributions in Poland, Bulgaria or elsewhere. The only thing this will allow is to improve controls but that we were already able to do that!” he exclaimed.

The French draft law will be examined at the beginning of February and should be adopted before the European Parliament elections on 25 May 2014.

According to a 1996 EU directive, posted workers have to comply with the labour law of the host country, a measure aimed at guaranteeing equal pay.