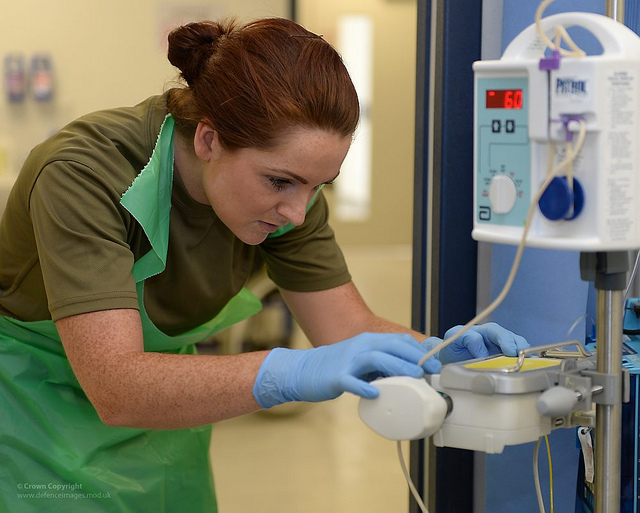 Gender-specific occupations are still common in the EU. [(UK Ministry of Defence/Flickr)]

SPECIAL REPORT / While many occupations are still dominated by one or the other gender, working conditions are gradually changing and are having a different impact on men and women’s health.

Working conditions have improved over the past decades thanks to regulations that protect workers and which also give managers a say when it comes to preventing risks at work.

Although a decrease in work accidents has been observed in Europe since the mid-1990s due to corporate social responsibility, new risks are emerging such as social risks, according to Marine Coupaud from the University of Bordeaux in France.

Speaking on Wednesday (4 March) at a conference on Women’s Health and Work organised by the European Trade Union Institute (ETUI) in Brussels, Coupaud highlighted that ‘burn-outs’ are one example where gender factors comes into play.

Contrary to the prevailing view, women are not more sensitive than men when it comes to interpersonal relations and remarks about their work. But Coutaud said physical working conditions obviously have a greater impact on women.

“Working more than 40 hours per week will have a negative impact on both men and women’s health, but the trend is worse for women. Working more for a woman will create more disorders and more health problems than for men. Mainly, this is due to the fact that a lot of unpaid work, such as domestic work, is also mainly carried out by women on top of the 40 hours of paid work,” Coupaud said.

And of course, paid work remains a discriminating factor, with the gender pay gap currently estimated at 16% on average in the EU. Women are still overrepresented in lower-paid sectors of the labour market, and underrepresented in decision-making positions. As EURACTIV reported previously, experts have highlighted the growing frustration among women about inequality, saying this lack of diversity is unhealthy for society and the economy.

Since the European Commission proposed a law on gender balance on company boards, more companies are looking for female talent, and since October 2010, the share of women on corporate boards has risen by 7.6%.

Florence Chappert from the National Agency for the Improvement of Working Conditions in France (ANACT) said that since 2014, companies with more then 50 employees are required to make risk assessments that take the gender factor into account.

While industrial activity has declined in France over the past decades, the number of women working in the sector has increased without there being major changes to the work, Chappert noted. This means that women are now more exposed to industrial risk than men, she said.

An analysis carried out by ANACT among companies with more than 50 employees in Brittany, also showed that the recruitment process was mainly favourable to men, and that women were mostly employed with fixed duration contacts, which offer less stability.

This resulted in a differentiated exposure for men and women when it comes to occupational risks, said Hélène Plassoux from ANACT in Brittany. The women often had changing schedules every week, which made it harder for them to organise professional and family life, she said.

Even in Sweden, which ranks amongst the most progressive countries in the world, there are male- and female-dominated occupations.

Mats Ryderheim from the Swedish Work Environment Authority warned that those looking up to Sweden for good examples on gender policies will be disappointed.

The Swedish government set up an enquiry committee a few years ago to find out why women in general were more absent at work than men. The inspections which were carried out in a number of Swedish municipalities ended up revealing how much some sectors were dominated by men and others by women. For example, in the social homecare sector, only 8% of the employees were men, while 40% of the women working in this sector had part-time jobs. Meanwhile, in the technical services sector, 75% of the workers were men.

Ryderheim said working conditions in the social homecare sector were particularly difficult for women because they required flexible hours to ensure proper care, a demand which was draining the workers’ energy. Meanwhile, in the male-dominated technical services sector, workers often had to deal exclusively with machines – for example garden equipment – and were able to switch them off and go home exactly at 4pm.

He mentioned that the women in the homecare sector found it difficult to keep up with the workload and the amount of stress that followed while the workers in the technical services sector reported being able to manage the workload and stress.

Gender equality in employment was included in the Treaty of Rome singed in 1957. The first piece of secondary EU legislation in the field was the Equal Pay Directive of 1975, which prohibited discrimination on grounds of gender to all aspects of remuneration.

In November 2012, the Commission proposed a directive on gender balance on company boards, setting a 40% quota of women on non-executive directors. The text is stuck in the Council.