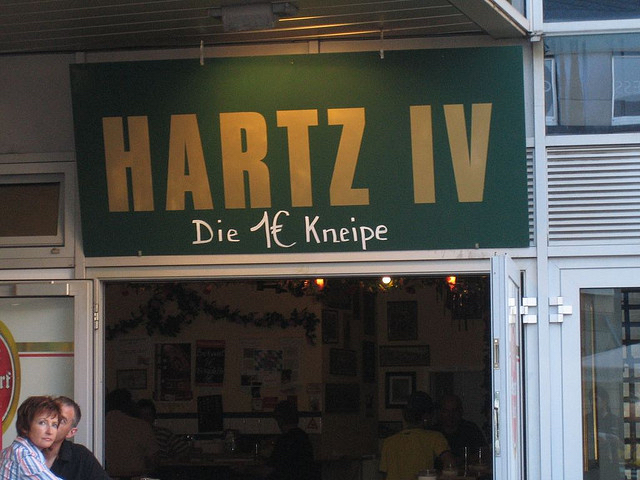 A Hartz 4 bar in Köln. [fabian-felix/Flickr]

Effective since the beginning of 2015, the minimum wage seems to be paying off, with statistics showing that fewer workers have been dependent on the Hartz IV unemployment benefit. EURACTIV Germany reports.

Though the Federal Republic’s new legal minimum wage has been controversial, statistics now reveal the first effects of the measure on the labour market.

In December 2014, Germany still had 1.268 million workers topping up their income with the Hartz IV unemployment benefit.

But in February 2015, two months after introducing the legal wage floor of €8.50, the number was down to 1.223 million – around 45,000 less. This was indicated in a government response to an inquiry from the Green Party (Bündnis90/Die Grünen) in the Bundestag.

The document also said the share of people topping up a low income with the unemployment subsidy, among the nearly 4.3 million Hartz IV recipients able to work, decreased from 29.3% at the end of 2014 to 27.8% in February 2015.

A spokeswoman from the Federal Labour Office said that the number of persons topping up always recedes around the turn of the year.

“Probably because people topping up their income with the unemployment subsidy are affected by winter unemployment and receive Hartz-IV temporarily,” she said. But the fact that the decrease is more significant than in previous years suggests “that this is connected to the introduction of the minimum wage,” the spokeswoman told the Süddeutsche Zeitung.

Greens: “Minimum wage is not a tool to combat poverty”

Meanwhile, the Greens in the Bundestag are warning against overestimating the effects of the minimum wage on employment. “The minimum wage is right, but it is not a tool with which to combat poverty. The minimum wage bypasses most working poor,” explained party spokesman Wolfgang Strengmann-Kuhn.

According to the Green politician, more measures are needed to pull workers off the Hartz IV unemployment benefit, including measures against family poverty, and among the self-employed.

“My proposal is a combination between the minimum wage, child allowance and an income subsidy for working individuals who are more than marginally employed. Here, the German government is also not doing anything to combat poverty,” Strengmann-Kuhn said.

Still, nearly six months after the introduction of the comprehensive minimum wage, the effects on the economy and labour market are hardly recognisable. Unemployment numbers have not increased. Only the illegal labour market has grown due to the new measure.

According to a recent study from the Johannes Kepler University in Linz and the Institute for Applied Economic Research (IAW), the number of illegally employed persons in Germany is expected to increase by 30,000 in 2015, to 7.8 million. The overall estimated volume of the shadow economy is €339.6 billion. It would be the first increase since the crisis year of 2009.

“The distortions caused by the minimum wage are moderate,” said Linz Professor Friedrich Schneider, who conducted surveys for the study and evaluated macroeconomic data for the first quarter. If the minimum wage were set at €10, the shadow economy’s revenues would have sky-rocketed by around €4-6 billion, he said.

Critics of the minimum wage law can be found within the German Farmer’s Association, which warns against migration of strawberry and asparagus production to foreign countries.

“For asparagus as well as for strawberries, we expect 10% lower harvest volumes at stagnating prices. For farmers, it means they earn less overall because wages have increased at the same time,” said the association’s president Joachim Rukwied in an interview in Monday’s (22 June) issue of the Neue Osnabrücker Zeitung.

“Something like that cannot go well for long,” he warned.

German farmers find themselves in competition with other producers throughout Europe, he pointed out. If strawberries from Germany are too expensive, stores buy them from outside the country where there are no or very low minimum wages, Rukwied said. “We have not resigned ourselves to the minimum wage and will not.”

On 1 January 2015, Germany introduced a general minimum gross salary of €8.50 per hour.

Almost all EU member states - 21 of the 28 - have a legal minimum wage covering all sectors. The exceptions - besides Germany for the time being - are Denmark, Finland, Italy, Austria, Sweden and Cyprus.