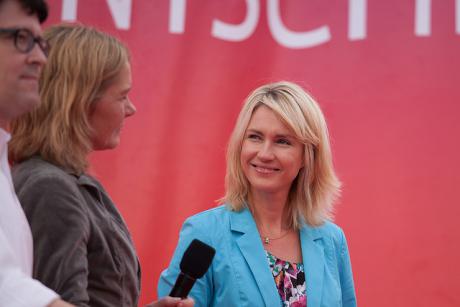 “I am convinced that this law will bring about a cultural shift in the working world," said Manuela Schwesig, Germany's Federal Minister of Family Affairs in response to the gender quota. [Marcus Sümnick/Flickr]

Supervisory boards in Germany’s roughly 100 listed companies will be subject to a gender quota starting in 2016, requiring that 30% of these positions be filled by women. EURACTIV Germany reports.

As was agreed in the coalition agreement, 2016 will mark the introduction of a requirement that at least 30% of supervisory boards be filled by women.

The new measure will apply to around 100 companies that are listed and have employee representation on their boards.

Meanwhile, 3,500+ medium-sized companies on the German market will still be able to decide on their own, and how many women are in their business’ leadership positions.

The meeting between coalition partners – the Social Democratic Party (SPD) and centre-right alliance (Union) – at the Chancellor’s Residence, ended a political dispute that has dragged on for years.

Chancellor Angela Merkel’s Federal Cabinet intends to sign off on the new gender quota on 11 December.

The measure mirrors a similar initiative taken at European level. In November 2012, the European Commission tabled a draft directive requiring that publicly listed companies in Europe have at least 40% females in non-executive board positions by 2020.

The proposal, fiercely resisted by business organisations, is still being negotiated between the European Parliament and the Council of Ministers.

Speaking during a general debate in the Bundestag on Wednesday (25 November), Merkel said the quota has been agreed and is on its way.

“We cannot afford to do without the competences women provide,” Merkel said.

Federal Minister of Family Affairs Manuela Schwesig, was able to successfully promote many of her demands during the debate.

“I am convinced that this law will bring about a cultural shift in the working world. Only after equality has prevailed at the company’s head – whether in the private economy or public service – will it trickle down to take effect in lower levels. When there are noticeably more females in leadership positions, young women and girls will be able to see that it is possible for them to rise to top positions,” Schwesig said.

Despite the Union’s efforts to include loopholes in the measure, the 30% rule comes without exceptions. This share will continue to be separately calculated for employer and employee boards. If the two parties agree to combine both groups for the 30% calculation, they are free to do so.

If a company fails to reach the 30% quota, the mandate cannot be filled (“empty chair”) – lowering the votes for the side affected (employer or employee).

Justice Minister Heiko Maas said he hopes the quota will only be needed at the start and that the 30% share will soon become a matter of course.

“The quota will help to break down existing structures and change corporate cultures,” Maas indicated. “The fairy tale, that there are not enough qualified women, can only be told by those who are stuck in the previous century.”

“The quota for women is a matter of equality,” said SPD Secretary General Yasmin Fahimi. “The argument that the quota is a burden on the economy is absurd. Germany, as an economic centre, needs women in leadership positions to be successful in future. The quota is also necessary because the share of women on supervisory boards has even decreased and the centre-right alliance has failed to define binding rules.”

Women still remain underrepresented in the boardrooms of German companies. The current share of women on supervisory boards of 160 listed companies in the DAX, MDAX, SDAX and TEC-DAX is 18.9% – with only 5.8% of executive boards consisting of women.

“Although it is already set in the coalition agreement, politicians – primarily from the Union – fought tooth and nail against taking this small step toward more equality. But it is long overdue.”

In 2012, the European Commission set a 40% target for the number of women in non-executive board member positions in publicly listed companies, excluding small and medium sized enterprises.

The bill is being discussed by the Council of Ministers, after getting strong backing from the European Parliament. In October, the Swedish government said it was considering imposing the quota at national level.

Under the leadership of Jean-Claude Juncker, the new Commission has assembled a team to investigate whether or not to withdraw the legislative proposal, along with others left over from the Barroso Commission.