A poster of the Hungarian government reads "Did you know? The Paris attacks were committed by migrants". [Guillaume Roth]

Orbán has refused to take a single migrant under the plan and the October 2 ballot will ask voters whether they agree with Brussels mandating the relocation of refugees without the approval of national parliaments.

The wording means that the referendum is highly likely to go Orbán’s way but to be sure the government has plastered lampposts and billboards nationwide with posters linking immigration – which Orbán calls “poison” – with terrorism and crime.

“Did You Know? Brussels wants to settle a city-sized number of illegal migrants in Hungary,” reads one.

But a satirical outfit called the Hungarian Two-Tailed Dog Party (MKKP) has decided to fight back against what Gergo Kovacs, one of its heads, called the government’s “campaign of fear”, putting up thousands of spoof posters of its own.

They too start with the question “Did You Know?”, but with answers such as “People aren’t stupid”, “More than a million people want to leave Hungary for Europe” or “The average Hungarian is more likely to see a UFO than a refugee in his lifetime”.

“There are hardly any migrants here at all,” Kovacs told AFP. “We are against the atmosphere of hate that the government has created.”

Some 400,000 migrants passed through Hungary last year bound for western Europe, but the number plummeted after the government controversially sealed off the southern borders with fences topped with razor wire.

Polls indicate that Orbán’s ‘No’ campaign will easily win, but the referendum will only carry if half of the electorate casts a valid vote.

So the spoof campaign also exhorts voters to spoil their ballots, with extra advice on how to do so coming from an app developed by the Two-Tailed Dog Party. 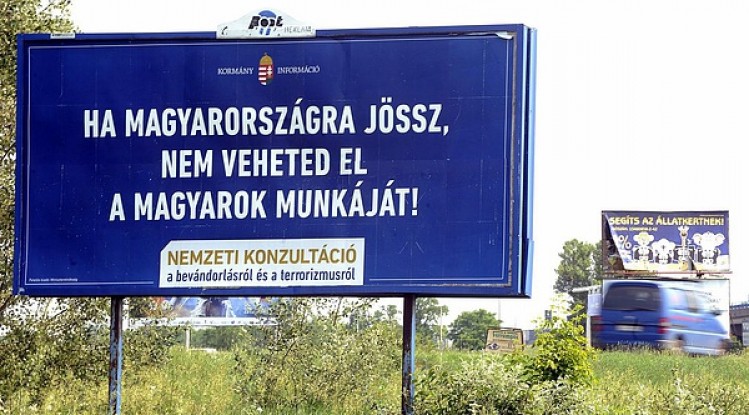 Orbán last year voted against the EU plan to share 160,000 migrants in Greece and Italy around the 28-nation European Union via mandatory quotas but it was nonetheless approved by a majority of member states.

Hungary has joined Slovakia in filing a legal challenge against the plan, which has been extremely slow to get going, with just 3,493 relocated from Greece and 1,026 from Italy as of September 5, according to the EU’s website.

Hungary will ask the European Commission to call off its decision on the distribution of refugees. The motion may have little support in the EU, but it is a clear statement of Budapest’s determination. EURACTIV France reports.

A Hungarian member of the European Parliament has sparred with a human rights campaigner and caused an outcry on Twitter after writing that pigs’ heads along the border fence erected by Hungary to keep out migrants would make an effective deterrent.