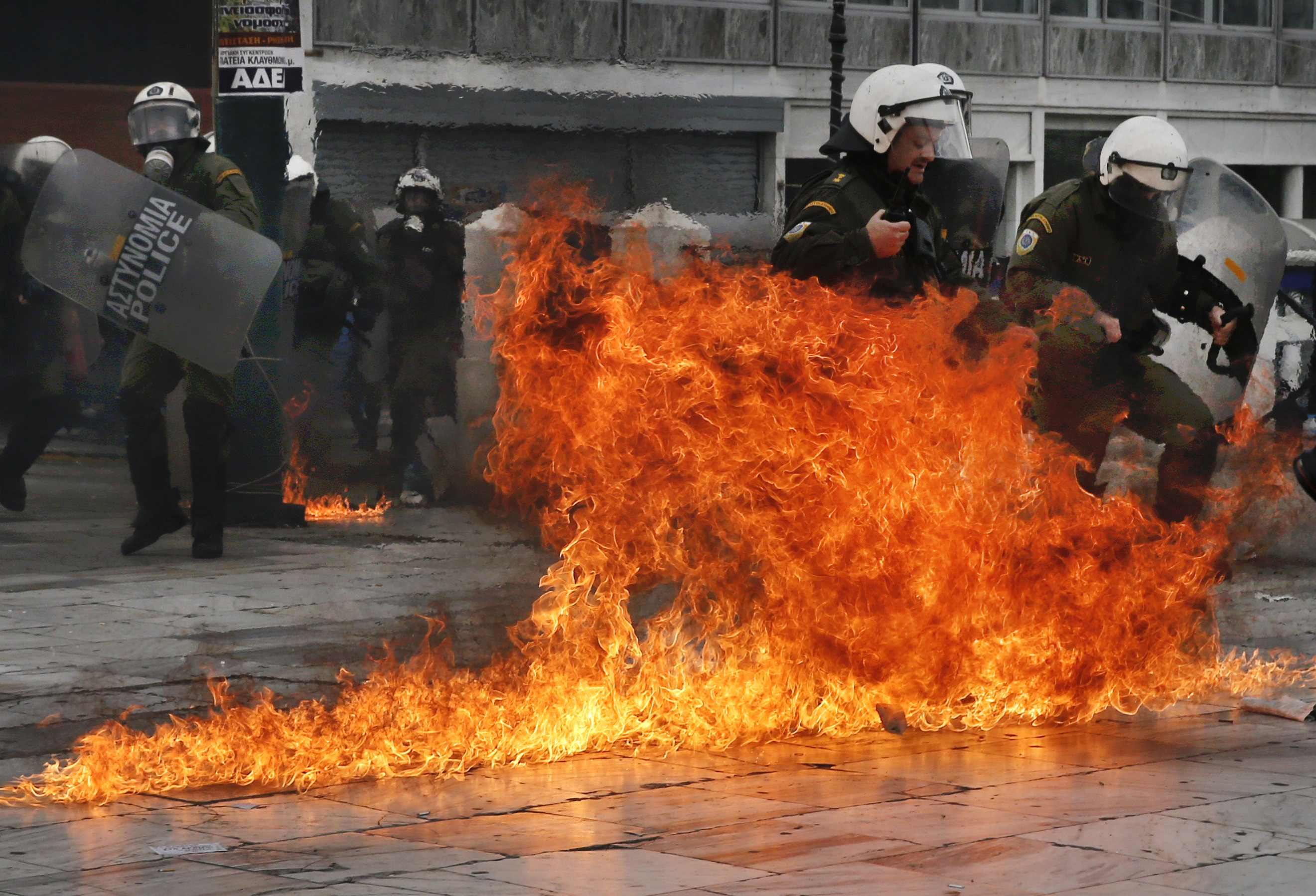 Thousands marched in Greece yesterday (4 February) as a crippling general strike against pension reforms swept the country, with hooded youths lobbing firebombs at riot police in scattered skirmishes in Athens.

Some 40,000 people joined protests in the Greek capital and another 14,000 demonstrated in Thessaloniki in the 24-hour industrial action, police said, as riot officers in Athens fired tear gas in response to Molotov cocktails.

A journalist was taken to hospital after being beaten on the sidelines of the demonstration. Police detained two people at the end of the protest, but not in relation to this incident.

It was the broadest protest since leftist Prime Minister Alexis Tsipras first came to power just over a year ago.

The unrest comes as the Greek government and its creditors are meeting to review the €84 billion bailout agreed in July after six months of bitter talks that nearly saw Greece exit the euro.

Thursday’s general strike – the third in as many months – paralysed transportation, stopping train and ferry services and grounding dozens of flights.

The pensions overhaul, a key part of Greece’s latest economic bailout, has sparked a major backlash against embattled Tsipras.

The widespread opposition has led to the rare sight of white-collar professionals marching alongside workers.

Lawyers, notaries, insurers and engineers have joined the protests, an action the media have dubbed the “necktie movement”.

“They have massacred my generation. We can no longer get married or have children,” said Dina, 32, who owns a lingerie shop and was marching in Athens, referring to five years of austerity cuts under Greece’s successive economic bailouts.

Tsipras is accused of breaking his campaign promise to eliminate austerity.

“The pledges were hot air,” read black balloons carried by some protesters.

One group marched behind a banner in Chinese opposing the imminent sale of the Piraeus port authority to Chinese shipping giant COSCO.

Many traders shut their shops in support of the strike. Petrol stations were closed and taxis pulled off the streets. Hospitals were also operating on an emergency footing.

Farmers also have protested at dozens of locations on national highways, intermittently blocking traffic with tractors. On Tuesday, they blocked freight trucks from travelling into Bulgaria and Turkey, causing long lines at the borders.

The strikers are furious at government plans to lower the maximum pension to €2,300 per month from €2,700 euros currently and introduce a new minimum guaranteed basic pension of €384 euros.

In his case, Karachristos says next year he will be paying 88% of his salary in taxes and pension contributions.

Critics say the new system penalises those who dutifully pay their pension contributions over a lifetime of work and will encourage undeclared labour practices.

But Greece must save €1.8 billion from state spending on pensions under a three-year bailout agreed with the European Union in July.

The Tsipras government has warned the nation’s pension system will soon collapse without the reform, which is expected to be put to a vote later this month in parliament, where the prime minister has only a razor-thin majority.

>>Read: Greece’s proposed pension reforms get no backing from opposition

After meeting representatives of creditor institutions – the European Commission, the European Central Bank, the International Monetary Fund and the EU’s bailout fund, the European Stability Mechanism – Labour Minister Georges Katrougalos admitted talks on the thorny issue of pension reform had been tough.

“The negotiations have been detailed and difficult. There has been discussion of the whole of the reform project,” he said.

Katrougalos said all areas were still open for discussion and talks would continue next week with the creditors’ technical teams.

"I really don't like it when we're portrayed as this draconian, rigorous, terrible IMF," Lagarde said in an online news conference.

"We don't want draconian measures to apply to Greece, which has already made a lot of sacrifices."

But she insisted that the Greek reform program has to keep on track, notably on pension reforms, a key issue in negotiations between the government and its creditors.

According to Lagarde, the current pension system, which costs the equivalent of 10% of the Greek economy annually, is not sustainable and should undergo a profound overhaul.

In Europe, the average pension ratio is 2.5% of gross domestic product, she noted.