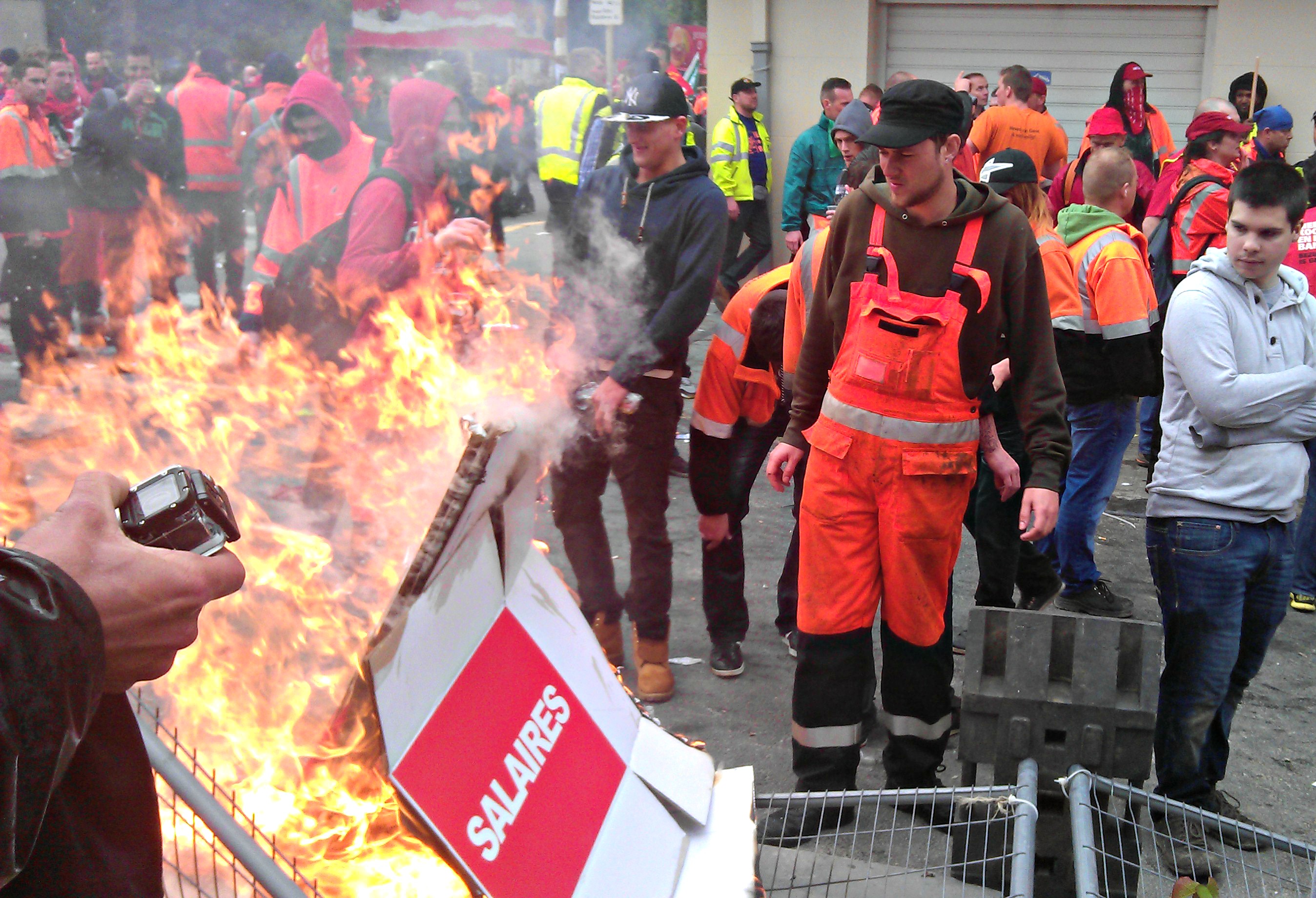 The noise of firecrackers and water cannons echoed around Schuman roundabout, the home of the European Commission today (4 April), as a workers’ protest against austerity turned violent, injuring 27 people, eight of them seriously.

March organisers say that 50,000 people came to Brussels from 21 countries across Europe to demonstrate for a massive job investment programme and against austerity policies. Police sources put the figure at 25,000.

“That people came from as far away as Portugal, Bulgaria and Cyprus should send a sobering message to EU leaders,” said Bernadette Ségol, the secretary-general of the European Trade Union Confederation (ETUC). “People have had enough of austerity. They want a concerted effort to tackle unemployment, poverty and inequality.”

But as the march passed the US embassy, their message was drowned out by anger. Rocks and deafening firecrackers were thrown by some protesters, triggering a lockdown inside the US compound until water cannons were brought out to disperse protestors towards Rue Belliard.

There, impromptu barricades were set up in the street. Further up towards the European parliament, metal hoardings were torn up and thrown at workers on the site below who refused to join the demonstration.

Finally, at the demonstration’s terminus in Schuman, hundreds of marchers adorned in the orange bibs of the BTB-ABVV docker’s union from Antwerp ripped up paving stones to throw at riot police, who responded with blasts from two water cannons.

The Belgian trade union leader Anne Demelenne told EURACTIV that the workers actions had done “a disservice” to their cause. “I can understand the anger [and] despair because of the lack of jobs, because of the dark perspectives that Europe offers, but we are here to ask for a turn to the left, and we will not be able to convey our message as we should this way,” she said.

But the dock workers rejected responsibility for the violence. “It was not us,” one told EURACTIV at the scene of the fighting. “It’s the police that started shooting with water cannons at us.”

The Belgian dockers’ main grievance is a 40-year-old “Law Major” that grants social advantages, and protects them from social dumping. The country’s Flemish-speaking Liberals want to reform it, arguing that it harms the port’s competitiveness.

On 25 March, the European Commission sent a formal notice to Belgium asking for changes to the law – which protects 8000 workers – to be made within two months.

“Brussels is going to burn”

“We are not violent, but if the law is scrapped in two months, there will be a war in Brussels,” one port worker told EURACTIV, as his colleagues who nodded in approval.

“Yes, Brussels is going to burn if they touch this law,” another added in Flemish. “Everything has become too expensive. We are not against Europe, but against a Europe where our salaries are cut down and we can’t find a job.”

The labour protest was unusually diverse and youthful, peppered with sound systems playing reggae and rock throughout.  One masked docker from Antwerp who identified himself only as ‘Ice man’ told EURACTIV that the workers were fighting because the police had locked them in.

“This new Europe that the European Commission [is creating] is not for the people who work in the port of Antwerp,” he said. “We have to protect our jobs and incomes.”

Fighting with the police was not “the right way” forward, he added, “but they have locked us in here.”

The labour protest had been conceived as a spark for radical change at the EU elections – and at a Belgian national poll – next month, putting sustainable reindustrialisation, growth and jobs back onto the political agenda.

EU unemployment in February was running at 10.6% and 22.9% for those under 25-years-old. In Greece and Spain, the jobless rate is more than a quarter, and unemployment is above 50%.

The ETUI (European Trade Union Institute) released a study last month which argued that Europe was “half-way through a lost decade”.

According to the ETUC, 11 million jobs could be created over ten years with a €250 billion investment, a quarter of what was spent on saving Europe’s banks, and a quarter of what is lost annually through  tax evasion and fraud.

“We denounce the budgetary austerity that created 10 million more unemployed people in Europe workers since 2008. It shows how much we were right these last years to denounce these right-wing policies. We are here to put our alternatives forward and the necessity to invest more in the real economy, to make it possible to create more jobs through a more just tax policy and fight against the social dumping with minimal salaries in each EU member state. That is our message,” Anne Demelenne told EURACTIV.

The ETUC secretary general, Bernadette Ségol added: “Stop austerity is our message for the next elections, stop unemployment, invest for quality jobs, we should have a big European investment plan to give perspective to people that Europe is there for them.

“Benchmarking Working Europe 2014” came to the same conclusions earlier in March: austerity is not working – income inequality and the rate of people at risk of poverty have risen.

The report suggests that alternatives need to be found through investment and reform of the fiscal rules. “Recovery requires current spending from governments (…) There is also little point in trying to modernise societies, for example with new facilities for education, research and health, if there are no resources to pay the employees. Therefore, at least until growth is restored, the rules on fiscal deficits and debt level need to be interpreted luch more flexibly. More radical measures would include steps towards mutualisation of public debt (…)” ETUI wrote.

Trade unions want to see a “reindustrialisation” of Europe in the words of the ETUC secretary general: “We want to re-industrialise Europe for sustainable growth, on environment, on transport, energy, housing, on health,” Ségol called.

The study also focuses strongly on “green investments”: “this additional investment would help to give a kick to the anemic European economy and set it on a sustainable growth trajectory,” the report found stressing the beneficial effects such investments would have on employment, especially for the construction industry sector, which suffered strongly from the crisis, and could benefit “from a dynamic investment programme in energy saving” the study found.

Members of trade unions called for a radical change at the next EU elections in May 2014, which in many countries coincide with some kind of national elections – as in Belgium where a crucial parliamentary election will also take place.

But although no specific partisan instruction was given, the speakers’ messages during the demonstrations were clear: “we do not want more right-wing policies”, was the motto of the day.