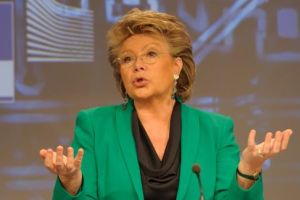 EU Justice Commissioner Viviane Reding has kicked off a three-month debate that could result in more decisive legislative action, a year after she called on companies to take voluntary steps to increase the number of women on boards to 30% by 2015 and 40% by 2020.

Despite expectations that Reding was going to propose legislative action this month, the Commissioner preferred to postpone the decision until after a public consultation.

The Commission published a report yesterday (5 March) showing  that limited progress towards increasing the number of women on company boards has been achieved one year after Reding called for credible self-regulatory measures.

“The lack of women in top jobs in the business world harms Europe's competitiveness and hampers economic growth,” said the Commissioner, adding that despite her calls, self-regulation had not brought satisfactory results.

Belgium, France, Italy, the Netherlands and Spain have started to address the situation by adopting legislation that introduces gender quotas for company boards. Some other countries – Denmark, Finland, Greece, Austria and Slovenia – have adopted rules on gender balance for the boards of state-owned companies.

But that is not enough, Reding said. “Personally, I am not a great fan of quotas. However, I like the results they bring.”

“I believe it is high time that Europe breaks the glass ceiling that continues to bar female talent from getting to the top in Europe's listed companies. I will work closely with the European Parliament and all member states to bring about change,” she added.

The Commission's Legislative Work Programme for 2012 includes an initiative to address this situation. But before going ahead on proposing  legislative action, the Commission has launched a debate with the public, hoping to have the backing for stronger legislative measures that go beyond the recommendation set in the 2012 work programme.

The Paris-based Organisation for Economic Cooperation and Development said that there was no conclusive evidence that a company's performance was improved by having more women on the board.

But "it is increasingly recognised that greater gender diversity in firms would increase the talent pool for top executives," it said.

The OECD released yesterday a study showing the wage gap between men and women is wider in Germany than in any other European country and women occupy just 4% of top corporate jobs. Germany may be run by a woman – Chancellor Angela Merkel – but it is still lagging on gender issues, despite promises to change its ways.

Full-time employed women earn 21.6% less on average than their male counterparts in Germany, a pay gap that is well above the OECD average of 16%. In Norway and Belgium, two countries that have adopted gender quotas on company boards, women receive 8.4% and 8.9% less, respectively, showing that binding legislation has also an impact on bridging the pay gap.

ALDE MEPs welcomed European Commission's actions and underlined that such 'bold actions' should extend in the European Central Bank (ECB) governing council which is still dominated by men.

Sharon Bowles (UK, Lib Dem) said: "The Commission are showing leadership today in pushing for change in corporate board rooms. They should be equally bold in their support for MEPs who are asking Member States to break the all-male dominance of ECB leadership."

Sylvie Goulard (Modem, France) also said that "EU Finance Ministers must soon decide on the replacement of Mr Gonzalez-Paramo on the Executive Board of the ECB. There is not a single woman on the Executive Board, nor on the Governing Council or the General Council. This is an opportunity to take stock of the glaring absence of women in the top positions of the Bank."

We need to work much more proactively towards a more balanced representation in the EU institutions. In the specific case of the ECB Executive Board, we urge Member States to meet their commitment and agree a model for selecting candidates whereby each Member State nominates two candidates, one man and one woman ", concluded Olle Schmidt (Folkpartiet, Sweden).

The Greens also welcomed the proposals and urged the Commission to push forward with legislation. Commenting after the presentation, Green MEP Marije Cornelissen commented: "Mandatory quotas are the only way to ensure the underrepresentation of women in management positions is finally addressed. We supported Commissioner Reding in her commitment to come forward with binding legislation if self-regulation did not bring results and are counting on her to make good on this commitment as soon as possible."

On average 12% of board members of the largest publicly listed companies in Europe are women, and just 3% are leaders of corporate boards.

In 2011, the EU commissioner for Justice and Fundamental Rights, Viviane Reding, launched a Women on the Board Pledge for Europe, calling on large companies to increase the women present at the board level to 30% by 2015 and to 40% by 2020. Reding promised to consider legislative action if the self-regulatory initiative did not yield results by March 2012.

There is both an economic and a business case for better gender balance in company boardrooms and management. More women now graduate than men in Europe (59% vs. 41%), yet their professional careers lag behind men's. This underused pool of qualified workers represents an untapped potential for the economy. Studies also show a number of strong links between gender balance and performance in creativity, innovation, financial reporting, auditing and internal controls.

Promoting more equality in decision-making is one of the goals in the Women's Charter launched by the Commission in March 2010. The Commission then followed these commitments by adopting a Gender Equality Strategy in September 2010 for the next five years, which includes exploring targeted initiatives to get more women into top jobs in economic decision-making.