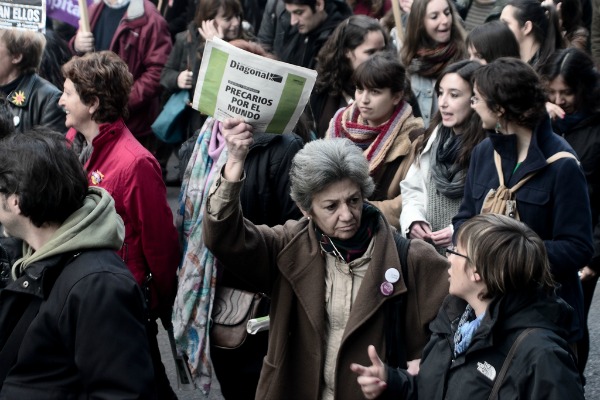 Record-high unemployment across southern Europe has led relatively prosperous retirees to provide an informal safety net, via their pensions, for their children, in order to fight widespread poverty.

For example, Angel Gomez and Maria Luisa Fernandez, who retired a decade ago, imagined they would spend their pensions largely on restaurant meals, holidays and toys for the grandkids. But their retirement money now helps support five families.

“I never thought I would have to spend part of my pension to help my kids,” said 79-year-old Gomez, who worked for 35 years as an administrative clerk at the Bank of Spain. “I am proud of it, but I’m a little worried for them.”

In much of southern Europe, pensions have been the most stable type of income during the past five years of economic hardship. In Spain, they rose 8.3% between 2008 and 2012, government statistics show. By contrast, incomes of people aged 30-44, the biggest group in the working-age population, fell 2.8%, as millions lost their jobs, or took wage cuts.

Insecure lives are common for the younger generation, even when they have work.

Gomez’ son David, 40, fears he’ll lose his job as a piano teacher when his state music school goes into private ownership later this year. His wife Raquel must reduce her hours as an administrative officer because her indebted employer, Spanish building and infrastructure company FCC, is cutting costs.

Retired people account for 17% of Spanish households, but finance twice as many.

Older generations in Spain, Italy and Greece regularly look after their grandchildren, and children are expected to take ageing parents into their homes. But not all pensioners can help financially without suffering hardship themselves.

One pensioner, 68-year-old Angel, supports three homes with the €1,600 he gets a month after 40 years of working in German and Spanish car factories. He pays nearly €1,000 a month into two different mortgage payments for his daughter and son, who has two university degrees, but cannot find a job.

“It’s getting hard,” Angel, who didn’t want his full name published lest friends and acquaintances learn of his family’s situation, told Reuters.

He and his wife have turned to eating frugal dishes common in the hard times that followed the Spanish civil war of the 1930s. “All our savings have vanished, and we’re back to eating rabbit with potatoes,” he said.

In Italy, pensioners’ income rose 4.6% between 2008 and 2012, while that of workers on long-term contracts, the main type of employment, fell by the same amount. 40% of Italians received financial help from their parents last year, according to a study by farmers’ association Coldiretti.

In Spain, more than 25% of workers are unemployed, and the rate among under 25-year-olds outside education is 55%. The affluence of pensioners relative to their children and grandchildren has created a dependency that may hurt those now aged 30-40 for the rest of their lives.

“We’re facing a generational time-bomb,” said Alessandro Gentile, a professor of sociology at the University of Zaragoza.

As today’s young are more likely than in the past to be hit by unemployment or under-employment during their careers, their pensions will be lower. This means that eventually they won’t be able to cushion their own children financially. At that point, Gentile said, the model of family solidarity “will short-circuit”.

As pensions systems are the biggest component of state welfare expenditure in most of Europe, they are hard to change overnight. Many governments have tried to change their loss-making pension systems a decade ago and retirement ages have risen to reflect increased life expectancy. In Spain, for example, people will retire at 67 in 2027 compared to just over 65 this year.

Also, in many European countries, a bigger share of contributions to state-run pensions is now paid by people while they work, rather than through taxes on working populations. But in most cases, the reforms won’t take full effect until 2030 or even later. With pensioners forming an important voting bloc, this reflects political resistance to faster change.

Greece is the only country to have taken drastic action, forced to cut pensions by 30% between 2009 and 2013 under the terms of its international bailouts.

The economic crisis has also undermined reforms begun in the 1990s. With so many Europeans unemployed, there are not enough well-paid workers paying into the system to fund it properly.

“It is not sustainable with such a low level of jobs, with such kinds of jobs with such low salaries,” Jose Carlos Diez, an economics professor at ICADE business school in Madrid, told Reuters.

Spain’s Prime Minister Mariano Rajoy is trying to plug the gap: Over the past two years, Madrid has financed the pension system with €16 billion out of a €70 billion special reserve fund. But the money will run out by 2020 unless new changes are made.

All European Election candidates have called for a more social Europe, whilst Europe is sometimes seen as a source of social dumping, especially in relation to posted workers.

The current establishment of a youth guarantee is considered one of the last legislation’s key advances on Europe’s social side.

To go further still, the issue of a common European insurance is gradually gaining ground, as is the idea of a European basic income.

0 responses to “Retirees help out their crisis-hit kids”