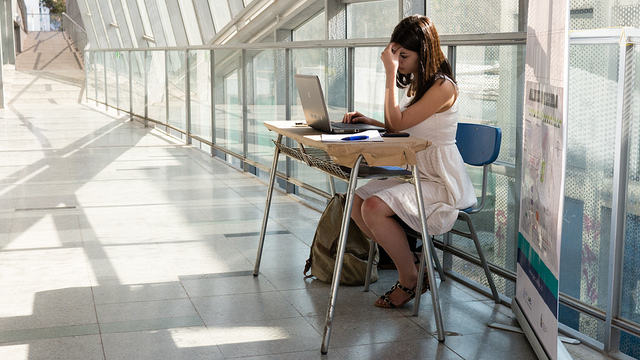 SPECIAL REPORT / Across the EU, governments are encouraging young people to become self-employed, with limited success so far.

Self-employment rates among young people remain low in the EU, on average just over 4%.

According to Marianne Thyssen, the EU Commissioner for Employment, Social Affairs, Skills and Labour Mobility, self-employment can bring the necessary flexibility to the labour market and be instrumental to create jobs and develop skills.

With 23% of young people currently jobless, according to Eurostat, Europe probably needs this kind of flexibility in the labour markets

While many young people express interest in starting a business and although the Commission supports training in business skills for young people via different funds, youth entrepreneurship is unlikely to be a panacea for solving the youth unemployment problem, Thyssen told EURACTIV.

Still, it can be a valuable part of the response, Thyssen claims.

Spain and Germany are two interesting examples of countries where young people’s self-employment. In Spain the self-employment rate among young people is above the EU average, at 9.4%. In Germany, it’s almost half that rate of Spain, at around 5%.

While Spain has witnessed devastating youth unemployment rates at around 50% over the past couple of years, Germany is the EU’s best performing country with a stable rate of 7%.

But many challenges prevent young people from setting up their own businesses. These include a lack of ‘start-up mentality’, financing opportunities and bureaucracy, according to EU-funded research. STYLE, ‘Strategic Transitions for Youth Labour Europe’, is an EU-funded research project which brings together researchers from across Europe who are looking into the consequences of youth unemployment.

Lack of experience: The biggest obstacle in Spain

María C. González Menéndez and Begoña Cueto from the University of Oviedo have focused their research on the situation in Spain.

The Iberic country has 3 million self-employed workers, one of the highest in the EU. This can be explained by an entrepreneurial tradition and dynamism in the country, according to Menéndez and Begoña Cueto. But in Spain’s case, it is more a sign of lack of opportunities for salaried employment after the financial crisis hit the country.

The sectors with the largest proportion of self-employment among young people is within retail (20%) and hospitality (15%), followed by education and services to businesses, with less than 5%.

While multi-level bureaucratic procedures are a problem, the researchers found that the procedure to create a start-up as a self-employed person is much simpler than it used to be. Financing opportunities are also being put in place at national level via the government’s Strategy of Entrepreneurship and Youth Employment 2013-2016.

These include reductions in social security contributions which have benefitted 255,367 young self-employed people. At the regional level, there are a number of support programmes for start-ups.

But Menéndez said the biggest obstacle to self-employment is the lack of experience.

“Without some labour experience it is more difficult to know how an industry works, the competition, the occupation itself, and to have useful contacts in the industry,” the researcher told EURACTIV.

“It is true that without labour experience you are also less likely to know how to get access to funding and what are the legal requirements to start a business, but the provision of information on these has become better and better,” she added.

Meanwhile in Germany, young people show little interest in self-employment. Only 17% of Germans regard it as desirable compared to 34% in the EU as a whole.

Renate Ortlieb and Silvana Weiss from the University of Graz say this can be explained by a general lack of an entrepreneurial culture, a lack of infrastructure and little financing opportunities for start-ups.

Various programmes have been put in place in the last decade In order to encourage self-employment in Germany. As in Spain, these include support in the way of finance, counselling and creation of networks.

ICT and creative industries are the most attractive to young self-employed Germans, although state policies promote new technologies in all sectors, Ortlieb said. And while the ‘self-employed’ label applies both to young freelancers and entrepreneurs with several employees, most have a high chance of becoming working poors, she warns.

However, Ortlieb still recommends self-employment support programmes, for example by boosting the entrepreneurial spirit in schools and universities.

“According to previous findings, initiatives that aim at the creation of an entrepreneurial mind-set and entrepreneurial skills, such as teaching programmes in schools or summer camps were well-received by both teachers and pupils,” she said, adding that reducing bureaucracy and complexities attached to legal obligations as well as financial loan support should be facilitated.

“Entrepreneurship should be encouraged and all young people willing to become entrepreneurs should have equal opportunities to do it, but it is not going to solve the youth unemployment crisis by itself. Young people are often disadvantaged, including when attempting to embark on entrepreneurial endeavours. Entrepreneurship should also be a strategically fostered policy rather than a last resort in a situation when you are up against the wall. There need to be measures in place to support this goal, including the simplification of administrative procedures, more information about social security systems, better access to business incubators and - most importantly - integration of entrepreneurship in school curricula from an early stage. Youth organisations can also play a role in encouraging entrepreneurship so they too should be part of developing and putting in place policies on it.”

Between 2007 and 2013, youth unemployment reached record highs across Europe, dramatically increasing from 15.7% to 23.4%, according to Eurostat.

Greece, Spain and Italy will receive the biggest share of the YEI, €3.4 billion.