As European Commission President Jean-Claude Juncker prepares to unveil a €300 billion plan to boost investment in the Union, the liberal ALDE and the Socialists in Parliament tabled alternative proposals, stoking controversy amongst themselves.

The Commission President is expected to present his €300 billion plan to parliament next week and submit it to EU leaders for approval at a summit on 18-19 December.

Juncker announced his €300 billion plan to boost investment in the EU on 15 July, the day when MEPs voted to confirm him as Commission President.

Ever since, the Socialists and the ALDE have kept reminding him that their support for the new Commission hinges upon delivering on this promise.

S&D group President Gianni Pittella said today (20 November) that the commitment Juncker made on 15 July was “the main conquest” of his political force over the hard bargaining following the EU elections.

Pittella also said that by tabling their proposal, S&D wanted to “save Juncker from a fiasco”. He called the plan “shock therapy” and “revolution”.

The Socialists presented to the press a graphic image of their proposal for an investment plan totalling €800 billion euro, consisting of three schemes to mobilise funds. Two of them, totalling €300 billion, appear as more traditional, and the third one, which is designed to mobilise a total of €500 billion of public and private investment, was presented as innovative.

The more traditional schemes involve the European Stability Mechanism, which was set up to deal with the countries’ bailouts during the Eurozone crisis, where there is money available. By a ratio of one to two of ESM money and private investment funds, a total of €150 billion is expected to be raised.

The second traditional-style scheme involves the use of profits and dividends of the European Investment bank. By a ratio of one to four the EIB money and private investment funds, another €150 is expected to be raised. 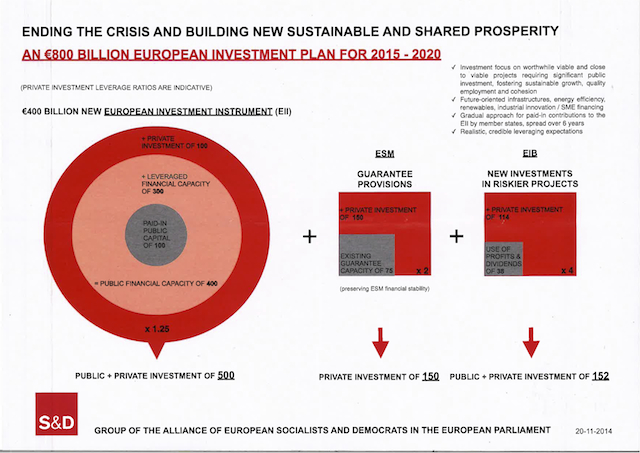 The third scheme is based on capital provided by the member states in order to reach €100 billion within six years. These national contributions should be excluded, according to the Socialists, from the calculation of public deficit and public debt. On this basis, the fund is expected to raise an additional €400 billion, provided by public and private investors.

As Pittella insisted, the crucial element of the plan was to deduct the national contributions for the fund of the Stability Pact.

The Socialists argue that the new investment plan should be directed at projects which could never flourish without a share of public investment, mentioning energy transition and energy efficiency, digital economy and innovation, as well as human capital.

But the ALDE was quick to slam the S&D’s blueprint.

ALDE leader Guy Verhofstadt, who had present a €700 billion plan the previous day, stated in a press release that it was good that the Socialist group also wants a bigger contribution than the amount of €300 billion proposed by Juncker. But he added that “the big problem” with their proposal was that it establishes a fund that is financed with contributions of the member states and which would only create more debt.

Verhofstadt said the S&D proposal was in clear contradiction with the Growth and Stability Pact, adding that exempting the proposed national contributions to such fund would be tantamount of “fooling ourselves”.

Verhofstadt also highlighted his own plan, which is based on three pillars.

The first is attracting private investment via European collateral. The collateral will be funded only by EU countries, whose budgetary plans have received approval by the Commission.

The second pillar of the Verhofstadt plan is a European tax stimulus for households and small and medium sized businesses. And the third builds on a legislative package to reduce red tape, integrate EU capital markets, complete the Single Market, build an EU energy market and accelerate the digital single market.

The Socialists in fact expressed criticism of both Juncker and of Verhofstadt’s blueprints. Reportedly, Juncker has been quite open in sharing his ideas with the two political groups. What the Socialists reproach him for is the lack of an innovative approach and what they described as an “unrealistic” leverage threshold, according to which public funds could attract a sevenfold amount of private money.

The S&D similarly criticized Verhofstadt, saying that his tax stimulus would only deplete state budgets of revenue, and create more problems than it could solve.