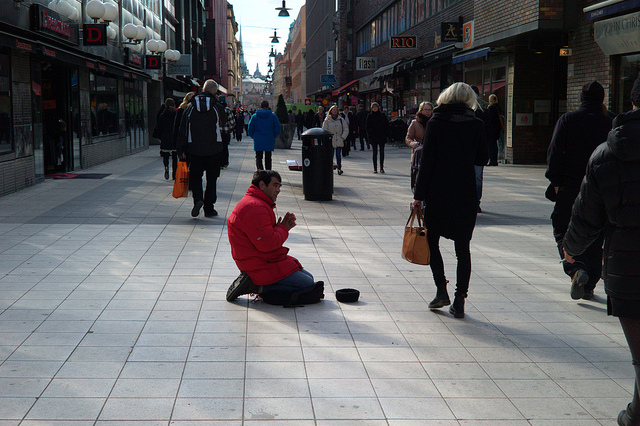 A survey by broadcaster SVT shows that the number of EU migrants begging in Sweden has doubled in one year, to 4,000, primarily from Bulgaria and Romania. This is in spite of negotiations on migrants Sweden initiated with Romania last year.

EURACTIV reported a year ago that the Swedish government had held secret negotiations with Romania, in an attempt to help Roma settling in Sweden. The Scandinavian country was witnessing far more panhandlers on its streets, with 90% of them coming from Romania, according to studies by Stockholm’s Social Administration.

However, the negotiations collapsed, and Sweden then turned to the European Commission for help. Stockholm wanted the Commission to set up a taskforce that could help point out where Romania could do more in terms of taking care of its weakest citizens, possibly via the use of EU regional funds. But Bucharest declined offers of assistance.

>> Read: Sweden in secret talks with Romania on beggars

Now begging EU migrants, with a majority coming from Romania and Bulgaria, but also from the Czech Republic, Slovakia and Hungary, can now be found everywhere in the Sweden; even in Kiruna, the northernmost town in the country.

According to SVT, there were between 3,400 and 4,100 begging EU migrants in Sweden following Easter, in April, compared to an estimated 800 to 2,000 at the same time last year. 40 more municipalities are now responding that they have counted panhandlers in their area.

The number, however, could be much higher, SVT said, as bigger municipalities have difficulties counting the migrants.

Martin Valfridsson, who is coordinating national efforts to help underprivileged EU migrants, said that there has been ‘competition’ when it comes to housing for migrants in some municipalities, forcing many migrants to travel north.

“We have seen this group grow every year. This is about discrimination and poverty in their home countries, which don’t live up to their responsibilities. It’s difficult to predict the future, but I think we need to get used to the thought that this situation will continue to be the norm,” said Marina Johansson, representing the Social Democrats in Gothenburg’s municipality.

Sweden is not only receiving a large number of EU migrants. The country is by far the biggest recipient of asylum seekers in the EU per capita. According to the OECD, Sweden received 5,700 asylum seekers per million in 2013, followed by Austria with 2,076 per million, and Hungary, with 1,871 per million.

The Roma are Europe's largest ethnic minority, EU figures show. The European Commission estimates the Roma population in the EU at 11 million, with their origins tracing back to mediaeval India.

0 responses to “Sweden sees explosion in beggars from EU countries”