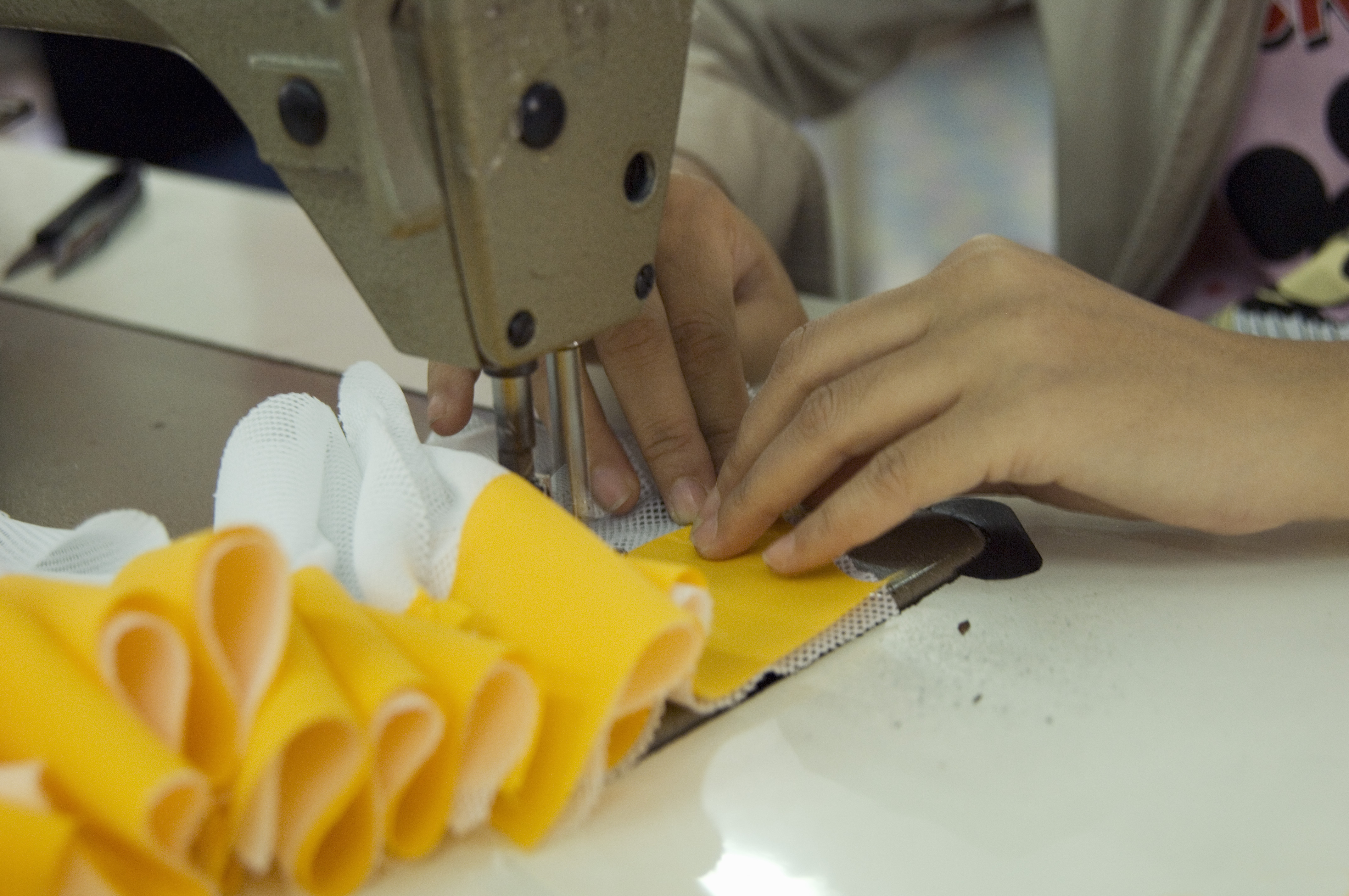 An investigation by the Clean Clothes Campaign in ten eastern EU member states, including Romania, Bulgaria and Croatia, showed that working conditions are sometimes worse than in China and Indonesia, busting myths about the ‘Made in Europe’ label.

Companies such as H&M, Zara, Hugo Boss, Adidas and Benetton pay their workers in Eastern Europe and Turkey the minimum legal wage, which is under the poverty threshold as defined by the European committee of social rights.

Moldova and Ukraine have the lowest net minimum wage, reaching €71 and €80 monthly respectively. Croatia has the ‘highest’ of the studied region with €308 per month, which is still “far below a living wage”, the study showed.

“By profession I am an economist. But due to lack of job opportunities I have to sew. There, people work like robots. No rest. Nerves are ruined, eyes are spoiled,” testifies an anonymous Bulgarian worker on the campaign’s website.

Interviewed workers also complained about not being able to take days off work, or even get sick leave. Romanian workers admitted that despite the lowest minimum wage being so low, they still were not able to earn that sum, and were obliged to work overtime, the researchers write.

These workers are often forced to work up to 200 hours a month, the investigation found. A Bulgarian worker even said having worked “up to 400 hours monthly”.

“In practice, the legal minimum wage is often the ceiling instead of the bottom line for wages,” according to the Clean Clothes Campaign.

The Clean Clothes Campaign, made up of trade unions and NGOs in 16 European countries, found that formally and informally, three million workers are concerned by these dramatic working conditions. Considering the average of three persons per family in the region, this means that nine million people are dependent on the garment and shoe industry.

“Poverty wages in this sector do therefore have a direct impact on the livelihoods of these 9 million people and limit their chances to overcome poverty and poverty-related exclusion,” the report highlights.

For women, the working conditions get even worse, the research found.

On top of being often sexually harassed by their employers, a group of Turkish workers admitted having “signed a clause to not get pregnant in the next five years” in their contract with Hugo Boss.

“One of the interviewed workers stated that a colleague of hers decided to get an abortion because she feared losing her job due to the “violation” of this contract,” the study reads.

In many of those countries, women are the sole breadwinners in the family, having to take care of parents and their children in the same time. Many are also single mothers, and having a contract – any contract – is their only chance to get paid health insurance, as is the case in Macedonia.

“Testimonies of women show the triple squeeze, the triple burden they feel: having responsibility for the family in doing paid work, care-work and growing vegetables to subsidize their poverty wages,” the Clean Clothes Campaign writes.

The high dependence of women on their jobs is an extra opportunity for these employers to pressure female workers to agree to the worst labour conditions, they conclude.

A survey on four Hugo Boss production sites in Croatia and Turkey also showed that workers were denied the right to collective bargaining, workers were intimidated, and women were sexually harassed.

In an emailed response to EURACTIV, the company said it “rejects the allegation mentioned and a proof has never been shown to us. Hugo Boss is working with selected manufacturers, with whom the company has established trustful relationships for many years. For this reason, the companies are well-known to us. Compliance with our safety and social standards is monitored regularly in independent audits by external consultants as well as by our own Hugo Boss teams”.

In most of these countries, laws were put in place to make it more difficult for unions to be accepted while the media spread anti-union sentiments and employers exerted anti-union pressure “always justified by the difficult situation in the sector and international competition”.

“Unions are said to ruin companies […] and the government is interfering pro management,” the researchers found.

The Clean Clothes Campaign is calling on governments and on EU institutions “to immediately raise the minimum wage to at least 60% of the national average wage and hold multinational companies accountable for their actions along the supply chains and to make sure that brands respect human and labour rights”.

Hugo Boss Germany rejected the study's accusations in an emailed response to EURACTIV:

“We clearly reject the allegation mentioned and a proof has never been shown to us. Hugo Boss is working with selected manufacturers, with whom the company has established trustful relationships for many years. For this reason, the companies are well-known to us. Compliance with our safety and social standards is monitored regularly in independent audits by external consultants as well as by our own Hugo Boss teams.

Our Hugo Boss social standards are based on the conventions of the International Labor Organisation (ILO) and the United Nations' Universal Declaration of Human Rights and they entail numerous measures to ensure minimum wages and regulated working hours, health and safety at the workplace and the prohibition of child labor.

There can be no talk of illegal practices towards our workers and there can also be no talk of paying poverty wages, as we take strict care of our partners complying with at least the legal minimum wage, as is usual for the industry and the entire sector.”

Euratex, the European Confederation representing the interests at the level of the EU institutions of the European textile and clothing industries, sent the following statement to EURACTIV:

“Regarding the coverage of the CCC survey, it appears that only the Apparel Industry is pointed, and not the Textile Industry. Regarding the brands mentioned, some of them are mainly retailers (as H&M). I would like to stress that regarding the main countries pointed by the Report of CCC only 4 are members of the EU (Slovakia, Romania, Bulgaria and Croatia). Ukraine, Moldova, Georgia, Macedonia, Bosnia and Herzegovina and Turkey are not members of the EU and thus are not governed by the EU rules/principles nor represented by the EU Social partners in the EU Social dialogue.

Since the methodological introduction of this survey mentions that "The research comprised desk research on the socio-economic situation of the garment sector and the national labour law as well as field research, namely off-site interviews with workers", Euratex asked its members to check with their national companies if the results of this survey fit with their statements of the situation and reports and to find ways to solve these important concerns linked to these wages. From its part, Industriall Europe also contacted its members to investigate further on this issue. One has to say that the EU Social partners (SP) are doing their utmost to promote and maintain a complete textile and clothing pipeline in EU in the most favourable working and social conditions.

However, due to the respect of the autonomy of the Textile and Clothing national social partners in EU, the SP decided to leave the competence of negotiating collecting bargaining and deciding on working conditions at national/regional/local levels. Indeed, for the companies of our sector, which are mainly SME’s, the strategic level for social issues remains the national, or even  the regional/local level. The member associations of Euratex thus continue to play their full role at their national level so far as collective bargaining and social information are concerned. Within this framework, presided over by the principle of subsidiarity (thus, in this case, the predominance of the national level over the European level), dovetailing the European sectoral social dialogue with national social relations is not always easy.

Despite this limitations in its competences, Euratex is attempting to play an even constructive and proactive role in the work of the European sectoral Social Dialogue by being attentive to the concerns of its EU trade-union partner and to the issues tackled by the European Commission in the field of employment, social affairs and education and training.

On the other hand, there is a growing public sensitivity to the need for more human treatment of company employees in countries of the world. For its part, and within the EU, the industry can point the increasing concerns/initiatives of companies (collective agreements, or individual initiatives) to make life more comfortable within a company sphere .

At EU level, Euratex can claim a good track record with its trade union counterparts in the social dialogue, in the code of conduct, and in a number of projects organised jointly (public procurement, economic and social fora, and statements at ILO or other events. More recently, joint projects have been organised to enhance the role of the social partners in the new member-states and in candidate countries, and have also made recommendations where restructuring is concerned.”

The EU textile and clothing sector is an SMEs-based industry as companies of less of 50 employees account for more than 90% of the workforce and produce almost 60% of the value added.

In the EU-27 the biggest producers in T&C industry are the 5 most populated countries, i.e. Italy, France, UK and Germany, Spain accounting for about three quarters of EU-27 production of textiles and clothing.

Southern countries such as Italy, Greece and Portugal, some of the new Member states such as Romania and Poland, and to a lesser extent Spain and France contribute more to total clothing production.

Northern countries such as the UK, Germany, Belgium, the Netherlands, Austria and Sweden contribute relatively less to textile production.