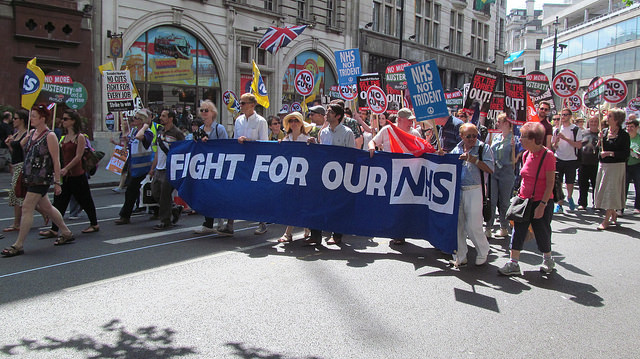 British trade unions and activists are launching a nationwide campaign to raise awareness against the “dangers” of the planned Transatlantic Trade and Investment Partnership (TTIP) for the public health sector.

In the run-up to the next round of trade talks between the EU and the US, civil society groups want to inform British citizens about plans to privatise the National Health Service (NHS), and the “irreversible effect” they claim TTIP would have on the public health sector.

Launched by War on Want, a human rights group, the protests against TTIP start today (8 July) in Birmingham, and will end on 12 July, with a march from the UK’s Department of Business, to the EU headquarters in London.

“There’s a big movement in this country around public health, to keep the NHS in public hands,” said John Hilary, executive director of the War on Want.

“The government is trying its best to privatise it. And what we’re saying is that should be the number one campaign. People need to be conscious that TTIP would prevent any new government from taking the NHS back into public ownership,” Hilary told EURACTIV.

The trade union Unite has joined the protest and is calling on Prime Minister David Cameron to exclude healthcare services from TTIP. The NHS is seen as particularly vulnerable since the Health and Social Care Act in 2012 significantly opened the sector to private investors.

The British government has rejected the claim that the NHS was at risk. Business Secretary Vince Cable told The Independent newspaper, “There is no suggestion whatsoever that the TTIP negotiations could be used to undermine the fundamental principles of the NHS or advancing privatisation. Our focus for health is to enable our world-class pharmaceutical and medical devices sectors to benefit from improved access to the US market.”

According to its supporters, TTIP would be the biggest bilateral trade deal ever negotiated, resulting in millions of euros of savings for companies and creating hundreds of thousands of jobs. It is claimed that the average European household would gain an extra €545 annually, and that Europe’s economy would be boosted by around 0.5% of GDP, if such a deal was fully implemented.

But protestors are still worried that once a service is privately owned, it will become “extremely difficult” to renationalise it.

With the introduction of the controversial Investor-State Dispute Settlement, or ISDS clause, compensation would also have to be paid to the private company in case of renationalisation, Hillary warned.

“You wouldn’t even have to pay them compensation for losses, but also for potential losses of profit in the future,” Hilary claims.

To illustrate his point, Hilary takes the example of Slovakia, where a bilateral trade deal was signed with the Netherlands, leading to the privatisation of the health insurance sector. Today the new government, which had campaigned against the move and promised to renationalise the sector, is sued by a Dutch company called Achmea.

After the renationalisation, “Achmea took it to an arbitration court and they won €29.5 million,” Hilary recalls.

Like with TTIP, Slovakia and the Netherlands had agreed on a bilateral deal which contained the same clause on arbitration tribunal.

“It’s the same principle using the same basis of investment to state settlement. This shows a clear precedent, we have cases where they have been successful in suing governments and this one is particularly important because it’s in Europe,” Hilary warns, “when you have opened up a service, then, if you put into your trade agreement schedule the services that the country is prepared to commit, it means that it is binding the liberalisation you have agreed to.”

Although awareness about TTIP is low in the UK, the impact it could have could inspire much larger protests, War on Want hopes.

Blame has also been cast over ‘pro-establishment’ media such as the BBC for not reporting about last month’s protests.

“The mainstream broadcasters and papers have not showed the same interest as they have in Germany or France. We had one or two articles in The Guardian and The Independent. We need to have something that will look more deeply underneath: who is promoting it, who will benefit and what are the risks,” John Hilary says.

The War on Want is entirely opposed to the EU-US trade deal and wants it scrapped altogether, warning that one million jobs in Europe will be lost if the two parties carry the plan, Hilary concluded.

The Transatlantic Trade and Investment Partnership (TTIP) is a trade agreement that is presently being negotiated between the European Union and the United States.

It aims at removing trade barriers in a wide range of economic sectors to make it easier to buy and sell goods and services between the EU and the US.

On top of cutting tariffs across all sectors, the EU and the US want to tackle barriers behind the customs border – such as differences in technical regulations, standards and approval procedures. These often cost unnecessary time and money for companies selling their products on both markets. For example, when a car is approved as safe in the EU, it has to undergo a new approval procedure in the US even though the safety standards are similar.

The TTIP negotiations will also look at opening both markets for services, investment, and public procurement. They could also shape global rules on trade.