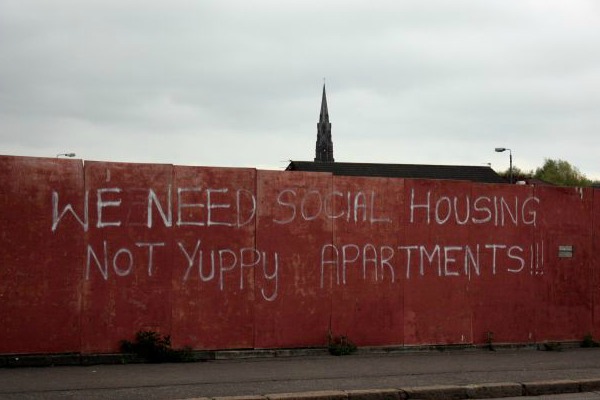 In the interest of jobs and growth, of social justice and financial stability, of all the challenges Europe is faced with, the next European Commission and the European Parliament need to take up the housing issue with ambition and creativity, write Freek Spinnewijn and Marc Uhry.

Freek Spinnewijn is director of the European Federation of National Organisations Working with the Homeless (FEANTSA). Marc Uhry is coordinator for European Affairs at the Fondation Abbé Pierre.

How can the EU reinvigorate its complex systems? This seemingly daunting problem has a surprisingly simple fix: effective changes to how the EU uses its mechanisms and tools, particularly when it comes to housing.

What we need is a small miracle that can ensure return on investment, spur economic development and create jobs, promote social justice and buttress the economy against future financial crises. It would be a miracle indeed to find a solution that can accomplish all this. However, housing is one of those rare beasts that could rally disbelievers around the European cause once again. No matter who wins this week’s elections, the next European Commission and the European Parliament need to take up the housing issue with ambition and creativity.

The housing sector is a cornerstone of Europe’s economy. In 2007, prior to the economic crisis new-built housing alone represented €640 billion or 8.2% of business in Europe. Between 2000 and 2007, thanks to growth in construction, employment in this sector increased by 30%, Eurostat figures show. The crisis stopped this growth in its tracks and job losses followed.

The financial crisis started with trouble in the housing markets, sparked by the unethical and unregulated practice of offering subprime mortgages in the US. According to Eurostat, one third of families in the lowest income quintile spend more than 40% of their income on housing in Europe – an increase of 5% since 2008. In Greece, the government has declared a three-year moratorium on foreclosures and repossessions of homes with 800,000 “at risk” mortgage loans. Spain has been paralysed by the foreclosures that have forced thousands of families from their homes, and sent the Spanish economy into a serious recession. The number of families and individuals who are homeless in Spain has grown, while simultaneously, Sareb, the ‘bad bank’ in which the government has taken on the toxic assets from Spain’s banks, has purchased 76,000 empty homes and 15,000 plots of land.

Local authorities are struggling and poverty rates are on the rise in urban centres, particularly those where speculation on the housing market has created dangerous bubbles, like London. Other areas, particularly rural, struggle with the opposite problem – depressed housing and property markets with poor quality housing stock.

The past 15 years has seen housing act as a driver of inequalities. Housing costs have consistently climbed for families on low incomes, while simultaneously remaining stable for the richest. Home and property owners have seen the value of their assets increase, while the purchasing power of middle and lower income earners has decreased. The whole of Europe is affected: housing shortage, unstable prices, vacant housing, urban decay, and poor quality of housing stock.

Of course, homeless people are the most severely affected by this economic crisis, this housing crisis. All the more so because vulnerable populations are stigmatized in times of economic recession. We see disturbing trends across Europe as more laws and regulations criminalizing and penalizing people living in poverty are enacted and enforced. For example, the even harsher proposed anti-social behaviour laws in the UK, anti-begging arrests in France, fines, forced public service work, and even prison sentences for people forced to sleep rough in Hungary, and poor treatment of Roma in most EU countries etc. This stigmatization and persecution of our society’s most excluded is at odds with the goals and ideals of our European project since the end of World War II.

Clearly, there are good reasons to do something about housing in Europe. Doing something will mean better responses to social needs, new stimulation for the economy, improved environmental protection, and defence of our democratic system. It is possible, and better yet, it’s even quite simple.

In fact, public investment in the housing sector isn’t public spending in the traditional sense. Even in the case of low rents, there is always a return on investment. In this sense, investment in housing is less a cost and more n “advance on rents”, as demonstrated by social housing in France. Even in these difficult economic times, creative, public authorities can and should use innovative collective financing mechanisms for social housing. A good example is France’s Livret A, Which is a unified mechanism for raising finance through private savings. This could be developed at European level if the EU could provide loans and policy guidelines, for example on rents, environmental standards, and energy efficiency. The EU has already supported retrofitting buildings for improved energy efficiency. This scheme could be reinforced and extended to other investments, for example lending for land acquisition for social housing developments, regulation in the private rental sector, support for low income co-ownerships through subsidized loans, support for a diverse housing sector through funding for associations, etc. The European Parliament, European ministers for homelessness and for housing, the Committee of the Regions, the Economic and Social Committee and others have called for a European strategy on homelessness. Up to now, however, the European Commission has ignored these calls from the EU’s democratic institutions. The next Parliament, along with the next president of the European Union can resolve this impasse and make a real difference – it’s in everyone’s interest.

The housing sector represents a possibility for economic stimulus in the EU without significant public spending. By supporting housing solutions for those in need, the EU can demonstrate that it protects its citizens. Better still, stimulating the housing sector will create new jobs. For example, if the EU were to sponsor a programme to create three million homes in Europe, it would create 1.5 million jobs. Such a programme could meet social goals and stimulate technological innovation as builders work to meet environmental standards to keep utility costs down, . By working on the stabilization of housing production and markets, the EU could contribute to clarifying the value of banking assets and thus boost consumer confidence.

It won’t really take a miracle, all we need to do is prove that solidarity and efficient economies are not contradictory. We can and should do this on the European level. It’s during difficult times like these that women, men, and institutions can show their mettle.

This is the task that we set for you, our future Members of the European Parliament and our next college of Commissioners.