Politicians are likely to be influenced by the electorate’s demographic power structures. With European societies aging rapidly, how are policy makers going to overcome this bias? Invest tax revenues in intergenerational measures and allow parents to cast proxy votes for their children, says Daniel Schraad-Tischler.

Most European countries face a serious challenge: their societies are aging rapidly, putting enormous pressure on social security systems. At the same time, changing demographics involve an increasingly larger and thus more powerful cohort of older voters – a development that has strong implications for the countries’ political systems and their structures of democratic representation as a whole. Why? Because politicians interested in re-election are likely to be influenced by the electorate’s demographic power structures when formulating policies and electoral programs.

These circumstances make the case of “intergenerational justice” a very complicated one. A recent study of the Sustainable Governance Indicators (SGI) project provides some empirical evidence on two key questions of intergenerational justice: First, to what extent do today’s fiscal, social and ecological policy outcomes entail unfair burdens for future generations? And second, to what extent do current social spending patterns reflect a bias toward today’s older or younger generations? The findings are striking and shall be used here for some practical policy-oriented recommendations. Let’s have a quick look at the figures first: 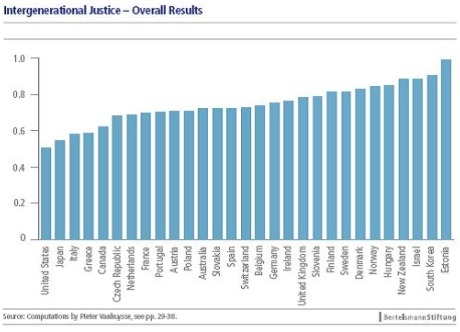 Among the 29 OECD/EU countries surveyed, tiny Estonia shows the highest degree of intergenerational justice followed by South Korea, Israel and New Zealand as well as the Nordic countries. Each Estonian child, for example, shoulders “only” $6,400 of his or her country's national debt, whereas a child in Greece bears $299,000, a child in Italy $308,000, and in Japan, with its high debt levels and top-heavy demographic structure, a crushing $794,000 in public debt.

Ecologically, all countries surveyed are clearly not sustainable. Only four European countries, Finland, Estonia, Sweden and Norway, show a net-ecological “surplus”. In other words, their countries’ respective biocapacity exceeds and can therefore absorb their “national” ecological footprint. However, when measured within a global context, all 29 countries are creating an ecological footprint that massively exceeds the Earth’s ability to regenerate. Environmental legacies for future generations are thus immense. 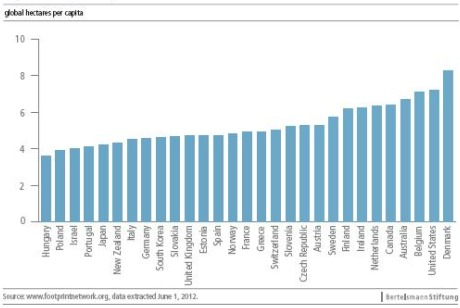 In terms of child poverty, another important indicator for intergenerational justice, especially the Nordic countries with poverty rates between 3.7 and 7 percent perform well. Since high levels of child poverty have strong negative implications for future life chances, countries like the southern European states of Portugal, Spain or Italy – with exceedingly high child poverty rates of 15 to 19 percent – therefore face a particularly urgent need to take actions in this essential field of intergenerational justice.

Moreover, many OECD/EU countries show considerably high imbalances in the distribution of social spending for today’s younger and older generations. Countries such as Poland, Greece or Italy allocate a disproportionately large share of social expenditures for the elderly (age > 65) relative to that allocated for young people. Remarkably, these pro-elderly spending ratios cannot always be explained by a country’s demographic structure. In demographically top-heavy Greece, for example, the state spends seven times as much on the elderly as it does on its younger citizens, whereas Sweden – which has a similar demographic structure – spends only 3.4 times as much on the elderly. 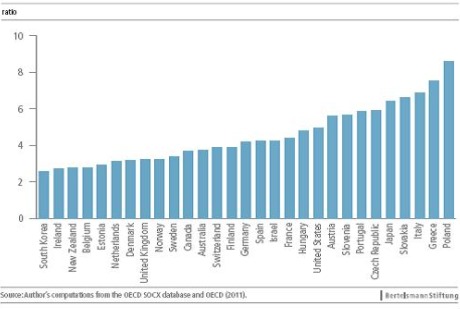 Evidently, most countries are far from living up to basic standards of intergenerational fairness. So, what can governments do?

Generally, government spending needs to reflect a much higher degree of intergenerational prudence. In this regard, governments would be well-advised to employ a strategy of “double whammy intergenerational earmarking”; i.e., tax revenues raised in one dimension of intergenerational justice should be directly earmarked for spending in another one. For example: Revenues from environmental taxes could be used for investments targeting early childhood education or efforts to reconcile parenting and work.

Another powerful means of pushing aging societies toward securing intergenerational justice may consist in introducing proxy voting. According to this idea, parents act as proxies for their children who are not of voting age by providing a vote on their behalf equal to one-half of a fully eligible vote. Through their parents, children would be able to exercise their political voice as full citizens. Doing so would grant considerably more weight to the interests of younger generations and, as a result, governments would be more likely to pay greater attention to their interests. Moreover, parents would be awarded for their demographic and societal contribution. And finally, proxy votes could act as an incentive in increasing voter participation rates among parents and could lead, at the very least, to more balanced participation rates between younger and older generations.

To be sure, proxy voting is a controversial proposal. However, escaping the intergenerational (in-)justice trap might also require some unorthodox thinking that goes beyond usual attempts of redesigning social policies. There is no time to lose.