Where are the women in Brussels’ policy panel debates? 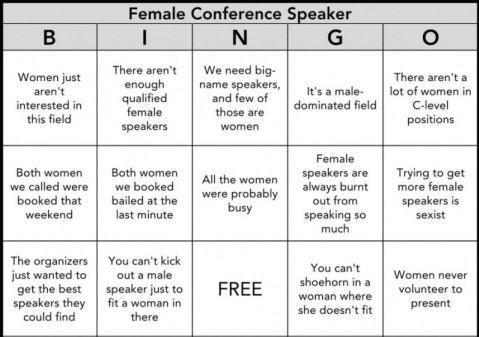 The myriad of policy debates held at conferences in Brussels all raise the same question; where are the women on the panel? Marika Andersen, Laurel Henning, and Linnéa Engström say enough is enough.

Marika Andersen and Laurel Henning are the founders of Twitter account @EUPanelWatch. Linnéa Engström is a Green MEP, vice-chair of the fisheries committee, and substitute for the committee on women’s rights.

As Europe moves through tough times and big decisions, we are all paying attention to the legislative changes that are on the table. Grand initiatives like the Energy Union are debated at conferences that draw attention from across the EU and further afield, while setting the agenda for Europe’s future. What could use more attention is the design of these conferences.

Often they aren’t just mostly male. Sometimes there isn’t a single woman on a panel.

Brussels is a conference capital. As the centre of the EU, experts descend on the city to inform and engage politicians, journalists, activists, consultants and bureaucrats.

The topics debated are varied, but unfortunately the people debating them often aren’t.

This has been our experience and we have recently started documenting it through the Twitter account @EUPanelWatch.

When we, or others, attend panels with no women – something that has already happened several times since the launch of our account – we draw attention to it on Twitter. Likewise, we promote well-represented panels.

We know that many people working in Brussels take issue with the lack of diversity on its panels. So @EUPanelWatch aims to give our followers a space to draw attention to this and contribute to a shift we hope to see in political debate.

This is a serious issue. With the complex challenges Europe faces, we need to inspire and include our best minds. We don’t do this by continuing to reproduce the same debates, with the same people, who aren’t representative of the European population or workforce. Failing to represent diversity of expertise will fail to inspire the number of people and range of experience we need to meet our challenges.

The New York Times calls it the “male talk fest”. And the Washington Post recently found that, in events hosted by Washington D.C. think tanks, a staggering 150 of them didn’t have a female speaker.

That bears repeating. There were not just significantly more male speakers – at 150 events there wasn’t a single female speaker. Our experience in Brussels suggests the situation is much the same this side of the Atlantic.

So why is it like this? The majority of university graduates are now women. That’s a total reversal of educational trends from the time when all-male panels were expected to be the norm. But while this shift in higher education is reflected in the workplace, it’s not being reflected in our debates. Women and men now both work in the “back room”, yet men are more often the ones that take part in debates.

The reasons are no doubt myriad. There is a game called Conference Bingo [see picture] which draws up the usual excuses for why women are under (or not) represented. These range from “trying to get more female speakers is sexist,” to “we need big-name speakers and fewer of those are women”.

No matter the reason, the point is the number of all-male panels we continue to see should no longer be the norm. While we wait for change, all-male panels are repeating an unsaid message; that an expert is a man.

“Not taking advantage of the skills of highly qualified women constitutes a waste of talent and a loss of economic growth potential,” the European Commission says in its discussions on gender representation on corporate boards.

This is equally valid for discussions that develop EU policy.

So what can we do?

We need to see debates with only male speakers as abnormal.

We need to think about why we invite the people we do and why we expect to see these people, who, regardless of competence, are sometimes simply those we already know.

@EUPanelWatch has chosen to focus on representation of women who, as half the world’s population, also (under-)represent different ethnicities, ages, abilities and orientations. We encourage you to use our twitter handle broadly.

Uniform panels just aren’t good enough. We need diversity not only in the back rooms working on policy, but also in discussions setting the path for Europe’s future. How can we expect to solve our greatest challenges if we continue to reproduce the same panels and debates?

Whether you are a speaker, organiser or participant, if you judge a panel’s composition below par, let people know. And feel free to use @EUPanelWatch to do so.