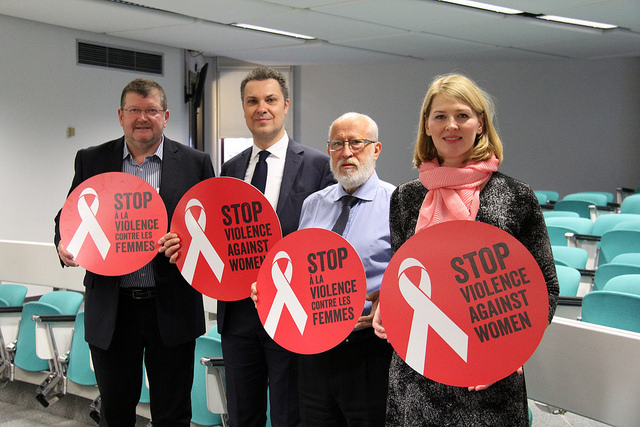 Trade unions have a role to play in ending the scourge of gender-based violence, writes Luca Visentini on the International Day for the elimination of violence against women.

Whether in the home, the workplace or the street, women have confronted the threat of violence for centuries, on a daily basis. The authorities frequently averted their eyes from abuse for which women themselves were often blamed.

In Europe, now, women are no longer second class citizens. And yet the violence goes on.

Today, 25 November, is the International Day for the Elimination of Violence against Women. And it is time to put an end to this unacceptable violation of the freedoms and fundamental rights of half of humanity, once and for all.

It is shocking to know that one in three women in the EU has suffered gender-based violence. Up to half of them report sexual harassment or unwanted ‘groping’ at work. More than one in every 10 working women has been assaulted by a superior, a colleague or a client. Over half of Europeans believe that gender violence is the most urgent problem undermining women’s equality.

Around the world, women continue to suffer forced marriage and domestic brutality, mutilation, sexual exploitation, trafficking and rape, which is becoming a routine weapon of war. In the current circumstances, female refugees and their children are especially vulnerable.

United Nations Secretary-General Ban Ki-moon has launched UniTE, a campaign to end violence against women, with 16 days of action from now until 10 December.  Major land marks –  including the European Commission’s Berlaymont building – will turn orange, to symbolise a brighter future.

The European trade union movement strongly supports this global campaign to raise awareness and eliminate violence against women. Trade unions have a specific role to play. The ETUC, which represents 90 union organisations in 39 countries, has joined with six industry-based federations today to pledge to work together to tackle gender-based violence.

The majority of our member organisations are already active. For example, they have negotiated collective agreements including provisions on tackling violence. These involve measures such as training to enable managers to spot cases of harassment at work, or medical and psychological support for employees who are victims of domestic violence.

Many trade unions also offer legal or other support for victims of violence in the workplace, and in some cases in the home. Our members have organised events to raise awareness and joined in national government initiatives aimed at combating the problem.

Together with European employers’ organisations, in 2007, we agreed on a European Framework agreement to prevent, manage and eliminate violence at work.  The ETUC will also launch an EU project ‘Safe at Home, Safe at Work’, looking for new ways for trade unions to counter workplace harassment and violence against women.  We need to share good practice and encourage all our members to take a stand.

Women in some sectors face specific risks. Transport is one of these, where the threat of violence can force some female workers out of their jobs. Aggression against school staff is a growing problem, from pupils as well as parents. And women journalists are another group on the front line, not only because of the often hazardous nature of reporting in conflict zones, but also from online harassment.

Government austerity cuts as a result of the crisis have gone in the wrong direction. Good public and social services are vital to support the female victims of violence, physically and psychologically, and enable them to escape from abusive situations.

Violence against women is a long-standing and complex challenge, requiring action on many fronts. As trade unionists, our members are present in workplaces all over Europe. Trade unions are there to protect their members, and so they need to demonstrate that all forms of harassment and violence against women must stop.

0 responses to “Women are not second class citizens: It’s time to stop the violence”