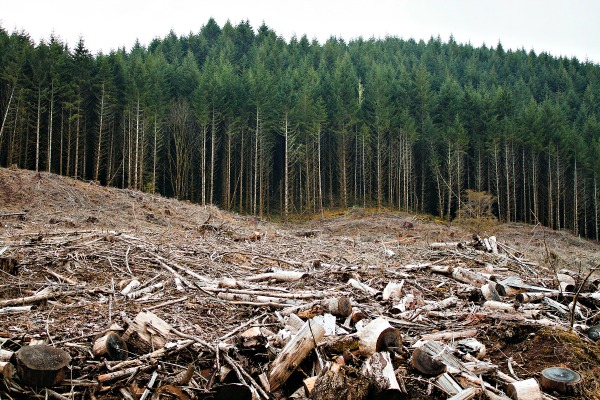 Biomass has risen up the political agenda as the EU’s energy focus has switched to securing indigenous sources of power that can reduce import demand. [Calibas/Wikimedia Commons]

A planned doubling in Europe’s use of crops and wood for fuel, transport and heating by 2030 will leave a 70.2 million hectares (Mha) land footprint, equivalent to the combined size of Poland and Sweden, according to a new report by the Vienna University.

In 2010, the global footprint from EU bioenergy demand equalled the total land area of a country the size of Sweden, says the paper ‘A calculation of the EU bioenergy land footprint’.

But “policy targets for bioenergy are projected to require an additional area expansion of the size of Poland by 2030,” it continues. “This expansion is strongly related to the EU energy targets for 2020.”

The EU aims to source 20% of its power mix to renewables by 2020, and used biomass for almost two thirds of its renewable energy in 2010. The bloc has also set a target of providing 10% of its transport fuel from renewable sources – mostly biofuels – by the end of the decade, although EU states still need to thrash out rules to account for the indirect effect this could have on land use.

The report assumes that biofuel use in Europe will hold steady at the 2020 levels, and extrapolates from the EU’s own future projections for biomass under a ‘business as usual’ scenario. It concludes that by 2030, biomass will account for 40Mha of land, biofuels for 11Mha and bioenergy crops for the rest.

The combined total of 70.2Mha would be “three times the size of the UK,” say Friends of the Earth, who commissioned the report.

A dramatic intensification of competition for global land would follow, the new report finds, as “there are currently no adequate and verifiable sustainability safeguards in place to guarantee the prevention of further ecosystem degradation from EU bioenergy consumption.”

Bioenergy is the world’s largest renewable fuel, providing around 10% of global energy supply, despite concerns that biomass sourced from non-Kyoto Protocol countries such as the US may involve unsustainable practices, and even deforestation.

An investigation by the Wall St Journal last year discovered unpermitted clear-cutting of US forests taking place for use as European biomass, practices that would be considered illegal in the EU itself.

When biomass is harvested in the form of fallen twigs and leaves, agricultural residues and other waste materials at the end of their life cycles, it can be a valuable source of renewable energy.

But burning a tree to create bioenergy in the form of pellets or chips releases all the carbon that the tree has absorbed in its lifetime and reduces the carbon sink able to store new CO2 until a replacement tree has fully grown.

On 22 May, the US Energy Information Administration reported that US wood pellet exports nearly doubled last year to 3.2 million short tonnes. Some 98% of these exports were delivered to Europe, and 99% of these originated from ports in the US’s south-eastern and lower Mid-Atlantic region.

Separate studies published earlier this month by the Institute for European Environmental Policy (IEEP), the International Institute for Sustainability Analysis and Strategy, the European Forest Institute and Joanneum Research also found that the planned demand for woody biomass would outstrip their sustainable supply.

The IEEP report concluded that only 1.3 million hectares of land in Europe could be used for energy crops, without displacing food production or damaging valuable habitats.

“Burning trees whole in our power stations is a disaster,” said Robbie Blake, the biofuels campaigner for Friends of the Earth Europe. “Bioenergy has a role to play in bringing down climate emissions, but it must focus on utilising waste materials rather than burning trees and food crops.”

Biomass has risen up the political agenda as the EU’s energy focus has switched to securing indigenous sources of power that can reduce import demand.

Reports say that bioenergy has proved particularly popular with coal-fired power plant operators in countries such as the UK, due to the relative ease of fuel-supply conversion.

As EU leaders grasped for a response to the Ukraine crisis last month, Jasmin Battista, a member of Energy Commissioner, Gunther Oettinger’s cabinet confirmed that planned sustainability criteria for bioenergy would be postponed until after 2020. Biomass-producing states such as Finland and Sweden are known to have put up strong opposition to robust carbon accounting rules.

One EU official told EURACTIV that there had been “zero consultation” with officers handling the file before the announcement was made. “We just heard about it through the press,” the source said.

Battista’s announcement came despite findings by EU scientists that the fuel could actually increase carbon emissions, due to an inability to monitor and account for its source at present.

Jonas Helseth, the EU policy director of Bellona, a foundation that promotes the sustainable use of biomass said that discussions with the EU’s hierarchy had convinced him that the fuel source was a necessary counterweight to Poland’s push for increased use of coal within the EU.

“I think the energy security issue is overshadowing everything at the moment and of course biomass is one of Europe’s indigenous energy sources,” he told EURACTIV. “We need to reconcile that new focus on reducing dependence on gas with the EU’s long term targets for climate action.”

Bellona says it was encouraged by a passage in the Intergovernmental Panel on Climate Change’s recent Fifth Assessment report which cited the use of biomass with carbon capture and storage (Beccs) technology as a ‘carbon negative’ solution – one which can actually create net carbon savings.

But this raised hackles with environmentalists, concerned at a switch to unproven and currently unprovable geoengineering strategies for tackling climate change.

Helseth accepted that the EU’s lack of sustainability criteria for woody biomass was a concern. “It goes without saying that importing biomass from rainforests is not a sustainable way of sourcing energy,” he said. “But that’s also the case for importing wood pellets from South Carolina where you have unsustainable practices.”

“If Europe is not able to ensure that those sustainability criteria are put in place and tested then the whole climate debate may be undermined and any hope of gaining carbon negative emissions from combining biomass with CCS rendered impossible.”

The directive included voluntary and contested sustainability criteria for biofuels for transport as well as bioliquids in electricity, heating and cooling.

Biomass, either solid or gaseous, is biological material that usually derives from forested wood, agricultural crops and residues, or from biodegradable waste such as municipal waste and sewage sludge.

In order to produce energy, it can be converted directly into heat or electricity or into biofuels or biogas.