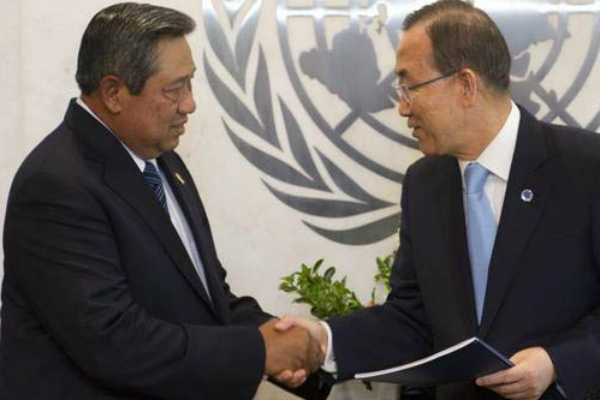 Big companies should report their impact on the environment in addition to their earnings under a UN plan to boost economic growth and ease poverty by 2030, according to recommendations by a panel of world leaders including British Prime Minister David Cameron.

Slowing climate change and protecting the environment should be at the core of global development, said the 27-member panel, led by Cameron, Indonesian President Susilo Bambang Yudhoyono and Liberian President Ellen Johnson Sirleaf.

"There is one trend – climate change – which will determine whether or not we can deliver on our ambitions," said the report, released on Thursday (30 May) in New York. "Without environmental sustainability, we cannot end poverty; the poor are too deeply affected by natural disasters and too dependent on deteriorating oceans, forests and soils."

The report recommends 12 so-called illustrative goals to replace eight Millennium Development Goals, or MDGs, that were aimed at reducing poverty and hunger. Those goals were agreed to by world leaders in 2000 and expire in 2015.

The goals recommended on Thursday will be the basis for a two-year debate among the 193 UN members on a development agenda for 2015 to 2030. Like the MDGs, which included a bid to halve extreme poverty, any specific new numeric targets will be non-binding.

Among the recommendations, the 69-page report says large businesses should be obliged to report social and environmental impacts, in addition to their financial accounts. About a quarter of businesses now make environmental reports, it said.

"We suggest that a mandatory 'comply or explain' regime be phased in for all companies with a market capitalization above $100 million equivalent," the report said. "The same principle should apply to governments. National accounting for social and environmental effects should be mainstreamed by 2030."

The U.N. panel proposes goals for 2030 such as doubling the share of renewable energy in consumption, phasing out harmful fossil fuel subsidies and doubling the rate of improvement in energy efficiency from buildings to transport.

About 13% of the world's primary energy comes from renewables such as hydropower, wood, solar and wind power, according to the International Energy Agency.

The panel said it was not presenting a "prescriptive blueprint … The suggested targets are ones for humanity to aspire to. They would not be legally binding, but they can be monitored closely," the report said.

The United Nations had hoped to set specific 2030 goals in areas such as water, food security and energy at a summit last year in Rio de Janeiro. But governments fell short, distracted by the global financial crisis and unrest in the Middle East.

The report said the Millennium Development Goals had made a lot of progress in reducing poverty. Even so, the 1.2 billion poorest people account for only 1 per cent of world consumption while the billion richest consume 72 per cent, it said.

And it pointed to threats, including climate change. "We must act now to slow the alarming pace of climate change and environmental degradation, which pose unprecedented threats to humanity."

In 2008, governments, businesses and other organisations reinforced their commitments to meet the MDGs, raising some €12.3 million in new funds for development. Two years later, the MDG summit adopted a global action plan, again reinforcing the drive towards meeting the MDGs