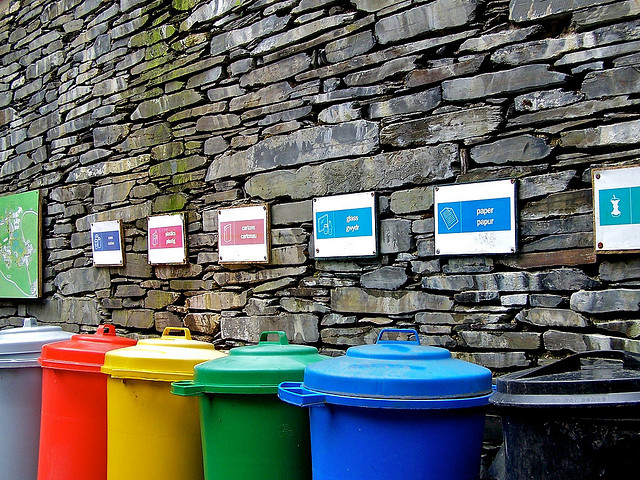 Not enough EU money has been earmarked for recycling in national spending plans for Central and Eastern European countries. [Dave Goodman/Flick]

Central and Eastern European countries have earmarked more than half of EU funds for waste to incineration and landfill, in spending plans that also give cash to fossil fuel industries, according to analysis by climate campaigners.

The funding plans will not convince investors to back renewable and low-carbon technologies or give a strong enough signal to spur the transition to a Circular Economy, despite a quadrupling in energy efficiency spending, Friends of the Earth Europe and CEE Bankwatch Network said in a report launched today (11 December).

Poland, the Czech Republic, Hungary, Slovakia, Latvia, Estonia,  Lithuania  and Croatia are allocated a total €146 billion from the EU budget for Regional Development and Cohesion spending. The funds account for about a third of EU spending, second only to the Common Agricultural Policy.

The countries have submitted draft spending plans for 2014-2020, which are subject to change, for their use of EU money. The plans will be finalised after negotiations with the European Commission, except in the case of Latvia and Estonia. Latvia and Estonia’s operational programmes have been backed by the executive.

Plans are evaluated against 11 objectives, including the transition to a low-carbon economy. The shift is a central objective of the new 2014-2020 regional policy enshrined in partnership agreements signed with member states.

The EU budget for 2014-2020 also contains an agreement that at least 20% of funds would be used to fight climate change.  This ringfenced spending should encourage high-carbon EU countries whose governments don’t prioritise climate spending to change, campaigners said.

But the governments planned to use the money for fossil fuel and resource-intensive projects, locking them into “dirty energy futures”, said Markus Trilling, EU funds coordinator at Bankwatch and Friends of the Earth Europe.

The European Commission said negotiations on some spending plans could continue until the middle of next year. It confirmed that a significant increase in energy efficiency spending was expected, while renewable energy support would remain the static.

The shift to a low-carbon and energy secure economy was at the top of the EU agenda and EU regional development and cohesion policy would make an important contribution to achieving it, the executive added.

Friends of the Earth Europe and CEE Bankwatch Network compared the draft spending plans for 2014-2020, to how the funds were last allocated, seven years ago.

EU funds were often the main source of public development funding in the analysed countries, the report said. But the current plans would not catalyse the shift to a low-carbon economy, did not give investors the certainty they need to back green projects, and would prevent the countries meeting their 2020 Climate and Energy targets.

Energy efficiency spending has quadrupled across the eight countries, with the biggest gains coming in the Czech Republic, Poland, and Slovakia.

But incineration and landfilling projects are earmarked for more funds than waste prevention, reuse, reduction and recycling. €1.18 billion is set aside for household waste, including incineration and landfill. About €1.1 billion is earmarked for waste sorting, minimising and recycling, with €403 million for commercial, industrial and hazardous waste.

High-carbon industries still receive funds. Estonia and Poland are planning a substantial amount of fossil infrastructure, according to the report.  Fossil fuels make up more than 20% of the energy infrastructure funded by the EU Budget.

Renewables spending has stayed the same over the last seven years. In the Czech Republic in particular, it is declining. Much, almost all in Estonia, Latvia and Lithuania, of the renewables funding is slated for biomass projects.  The report said such projects were potentially environmentally damaging.

In transport, roads are set to receive more than half of the funds, rail about a quarter, and only marginal amounts for clean urban transport.

“We’re seeing the same old types of projects being financed when a new era of more modern greener spending was promised. We need more public investments in sustainable energy and transport and in waste reuse and recycling which could work as catalysts for private investors,” said Trilling.

The European Commission released a statement to EURACTIV, which can be read in full in “Positions” below.

EURACTIV has learnt that €300 million out of a € 3.6 billion will be dedicated to the shift to a low-carbon economy in Estonia. The projects should contribute to stabilising 2020 energy consumption at 2010 levels (2.84 million tonnes of oil equivalent (Mtoe)).

But today’s report said that more than a third of EU funds would go to business without ensuring it is invested in sustainable development. There was no spending on wind power, air and noise pollution mitigation, and “little” for waste management, and nature protection.

In Latvia, €286 million out of a total €4.48 billion will support the national target of 40% renewable energy share. This would be delivered through energy efficiency in houses and businesses and backing renewable sources in district heating. A target of 143 MW has been set.

The campaigners agreed that there was good support for energy efficiency but said measures should target the poor and vulnerable. There was not enough support for flood prevention, water protection, or recycling, they added.

The European Commission said, "The adoption of programmes is subject to the proof that they provide the greatest contribution towards the EU Strategy for smart, sustainable and inclusive growth. To this end, programmes undergo a thorough screening by the Commission services in the light of the contribution to the national Europe 2020 targets, in order to confirm compliance and consistency with the priorities for these Funds, but also with Union policies and legislation.

"We are still in negotiation of the operational programmes (OPs) and it is early to make concrete assessments based on the categories of intervention mentioned in the question. We can, however, provide information on data provided in the partnership agreements – see the explanations below.

"The shift towards low carbon and energy secure energy secure economy is at the top of the EU agenda and the EU cohesion policy also has an important contribution to make. Based on the adopted Partnership Agreements we see that about €38 billion are allocated to the low-carbon economy for 2014-2020 period. This is more than double the amounts allocated for the previous period and is more than the legal minimum required amount for thematic concentration. Support for low-carbon economy includes investments in energy efficiency (in housing, enterprises and public infrastructure), renewables energy use and production, combined heat and power generation, smart distribution grids and sustainable urban mobility.

"The allocations to these areas within this priority are subject to negotiations and also are based on many considerations. These include the needs of the regions and member states, market conditions and level of technology developments and the need for public funding. On this basis, a significant increase of the funding for energy efficiency is expected, while it looks like support for renewable energy sources will remain at similar levels as in the previous period. The general principles for the selection of projects in any of these areas are now outlined in the draft Operational Programmes (OPs) but the concrete selection criteria are decided once the OPs are adopted by the monitoring committees in the member states.

"The Commission has put forward in 2011 in its Transport White Paper its vision for the rendering the European transport system more resource-efficient and competitive and the role of rail is explicitly recognised. At the same time, the development of a comprehensive and multimodal transport system that meets the diverse requirements of its users cannot focus on one mode but requires a balanced development of the infrastructure for all transport modes, such as rail, roads, ports and airports, inland waterways, as well investments in the infrastructure for multimodal transport services. At the same time, sustainable transport is broader than rail and it includes clean urban transport, inland waterways.

"Support for transport infrastructure investments are primarily geared towards the cohesion countries and the less-developed regions, where they shall help bridging missing links, removing bottlenecks and increasing its sustainability. The amounts foreseen in this context for the development of the different transport modes - depends on the specific circumstances of the member state or region concerned and on what is needed to ensure a balanced development of the transport system. The investments from the cohesion policy funds towards transport also need to be looked together with the support provided from Connecting Europe Facility, which also includes transport components.

"All 28 partnership agreements are adopted and we have received 203 Ops out of 205 under the Investment for growth and jobs goal are now submitted and 37 OPs have been adopted. We are currently in final stages of the negotiations for many of these OPs with possible adoption for more than half of them by the end of this year.

"However, the Commission has underlined that a strategic approach to the use of the funds is critical and quality is more important than speed and for some OPs the negotiations may continue until mid-next year."

Often referred to as regional policy, it provides vital basic financial support for investing in regions of the EU, thus helping to create jobs and boost economic growth. It accounts for a substantial share - about a third - of the EU budget: €347 billion in 2007-2013, or almost €50 billion per year.

Cohesion policy's ultimate aim is to reduce disparities between the levels of development of the various regions and the backwardness of the least-favoured regions or islands, including rural areas.